Konow was born in the borough of Fana in the city of Bergen,Norway. He was the son of Wollert Konow (1809–1881) and Marie Louise Oehlenschläger (1818–1910). His father was a writer and elected official. In 1842 his parents had purchased the historic Stend Manor in Fana where Wollert Konow was born. Wollert Konow was a grandson of the noted Danish poet and playwright Adam Oehlenschlager (1779–1850). [4]

He was a student at Bergen Cathedral School. After graduating in 1864,Konow went to the Royal Frederick University in Christiania. He began to study law which he never completed. In 1868,he started a school at Halsnøy in Sunnhordland where he was both teacher and head manager until 1872. In 1873 Konow took over operation of the mill at Stend and expanded the estate by acquiring neighboring properties. [5] [6]

Wollert Konow was mayor of Fana most of the time between 1880 and 1901,and was in 1877–1879 Deputy to the Parliament for Søndre Bergenhus amt (now Hordaland). He served as Minister of Agriculture in 1910 and Minister of Auditing 1910-1912. He was Odelsting president 1884–1887 and President of the Storting in 1888 and again from 1897 to 1899. He was a central board member of the Liberal Left Party from 1909 to 1912. Wollert Konow served as Prime Minister over a two-year period as leader of a coalition which combined elements of two competing parties;Høgre and Frisindede Venstre. Konow's coalition government came to an end in 1912 after he declared his sympathies for the rural language form Landsmål during the height of the Norwegian language conflict causing conflict with Riksmål supporters. After loss in the election in 1912,Konow was out of politics for good,and he spent the remainder of his life at Stend. [7]

He was commonly referred to as Wollert Konow (SB) to differentiate him from Wollert Konow (H) who was his cousin and contemporary politician from Hedemark. The initials "SB" stood for "Søndre Bergenhus," the now-defunct constituency Konow represented in national politics. [8]

Stend Manor (Stend hovedgård) was a historic estate which had belonged to Nonneseter Abbey of Bergen during the Middle Ages. Around 1682,the main building was built in timber as a single-story with three wings. In 1842,Dr. Wollert Konow acquired Stend. In 1861,Stend was bought by Søndre Bergenhus (now Hordaland) county. Since then,it has housed an agricultural school. Under the direction of architect Erlend Tryti (1885-1962) extensive renovation and restoration work was carried out in the years 1921-1922. The main building were restored in the late 1980s and early 1990s. [10] [11] 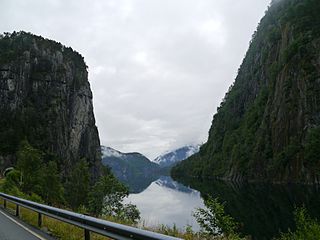 Hordaland was a county in Norway,bordering Sogn og Fjordane,Buskerud,Telemark,and Rogaland counties. Hordaland was the third largest county,after Akershus and Oslo,by population. The county government was the Hordaland County Municipality,which is located in Bergen. Before 1972,the city of Bergen was its own separate county,apart from Hordaland. On 1 January 2020,the county was merged with neighbouring Sogn og Fjordane county,to form the new Vestland county.

Norway is divided into 11 administrative regions,called counties which until 1918 were known as amter. The counties form the first-level administrative divisions of Norway and are further subdivided into 356 municipalities. The island territories of Svalbard and Jan Mayen are outside the county division and ruled directly at the national level. The capital Oslo is considered both a county and a municipality.

Bergen Cathedral School is an upper secondary school in Bergen,Norway. Located in the city centre,next to Bergen Cathedral,the school has about 850 students,95 full-time teachers,and 5 administration personnel,including the headmaster,Lise Hårklau Holsen.

Bernhard Cornelius Brænne was a Norwegian factory owner and member of the Norwegian Parliament with the Conservative Party.

Hans Jørgen Darre-Jenssen was a Norwegian engineer and politician for the Free-minded Liberal Party. He was the Minister of Labour from 1910 to 1912,and thereafter served as director of the Norwegian State Railways.

Baard Madsen Haugland was a Norwegian merchant and politician with the Liberal Party.

Bernt Holtsmark was a Norwegian farmer and politician for the Conservative Party and the Liberal Left Party. He was a four-term member of the Parliament of Norway,and served as Minister of Agriculture from 1910 to 1912. He was also known for establishing the agricultural college at Sem in his native Asker. 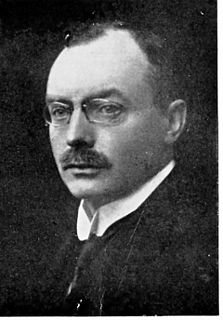 Fredrik Ludvig Konow was a Norwegian businessman and a politician for the Free-minded Liberal Party.

Ivar Bergersen Sælen was a Norwegian politician from the Conservative Party who served as Minister of Education and Church Affairs from March 1923 until his death in November the same year.

The Nesttun–Os Line was a narrow gauge railway between Nesttun,now part of Bergen,and the community of Osøyro in Os municipality,Norway. As the first private railway in Norway,it opened 1 June 1894,designed to connect Os to the Voss Line,allowing for passenger and freight transport to Bergen and Voss. Despite a boom caused by World War I,the railway was eventually driven out of business by competition from road transport,which provided faster service. On 2 September 1935,it became the first Norwegian railway to close,and most of the railway was dismantled the following year.

The Free-minded Liberal Party was a political party in Norway founded in 1909 by the conservative-liberal faction of the Liberal Party. The party cooperated closely with the Conservative Party and participated in several short-lived governments,including two headed by Free-minded Prime Ministers. In the 1930s the party changed its name to the Free-minded People's Party and initiated cooperation with nationalist groups. The party contested its last election in 1936,and was not reorganised in 1945.

Hans Larsen Saakvitne was a Norwegian farmer,bailiff and politician for the Liberal Party. He was mayor for several years,and served four terms as a regular representative in the Norwegian Parliament.

Claus Nils Holtzrod Daae was a Norwegian priest,educator and politician. 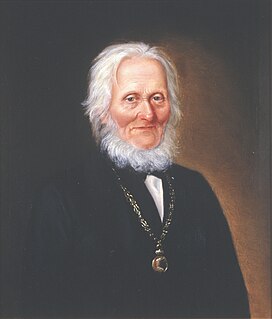 Olav Torkelsson,also known as Olaf Thorkelsön,was the 31st and last Roman Catholic Bishop of Bergen,from 1523 to 1535,and a member of the Riksråd.

Nils Nilsson Skaar was a Norwegian teacher,farmer,editor,and parliamentary representative from the Fykse Sound in the municipality of Kvam in Hordaland county.

Wollert Konow was a Norwegian politician and farmer.