Women's gridiron football , more commonly known as women's American football , women's Canadian football , or simply women's football, is a form of gridiron football (American or Canadian) played by women. Most leagues play by the same rules as their male counterparts, with one exception: women's leagues use a slightly smaller football. Women primarily play on a semi-professional or amateur level in the United States. Very few high schools or colleges offer the sport solely for women and girls. However, on occasion, it is permissible for a female player to join the otherwise male team.

The first evidence of women playing organized football was in 1926. It was then that an NFL team called the Frankford Yellow Jackets (the predecessors to the modern Philadelphia Eagles) employed a women's team for halftime entertainment. [1] [2]

Women in college and professional football

Of the women who have seen action in men's college and pro football, almost all have been in special teams positions that are protected from physical contact. The first professional player was a placekick holder (a position usually occupied by a person who holds another position on the team), while the best known female college football players were all placekickers, with all having primarily played women's soccer prior to converting.

Patricia Palinkas is on record as being the first female professional football player, having played for the Orlando Panthers of the Atlantic Coast Football League in 1970. Palinkas was a placekick holder for her placekicker husband. [3]

On October 18, 1997, Liz Heaston became the first woman to play and score in a college football game, kicking two extra points. [4] Prior to this game, female athletes at Duke and Louisville had come close to playing in a game but did not. [5] In 2001, Ashley Martin became the second female athlete to score in a college football game, this time in the NCAA.

In 2003, Katie Hnida became the first woman to score in an NCAA Division I-A game. She accomplished this as placekicker for the University of New Mexico Lobos on August 30, 2003. [6] She later became the second professional player, when she signed with the Fort Wayne FireHawks.

Julie Harshbarger, a placekicker for numerous Chicago-based Continental Indoor Football League teams, became the first female player to win a most valuable player award in an otherwise all-male league in 2014. By kicking five field goals that season, she earned the title of special teams player of the year, leading all kickers in the league in scoring; with a career spanning seven seasons, Harshbarger's career was the longest documented of any woman playing in a predominantly men's professional league.

In 2020, Sarah Fuller became the first woman to play in a Power Five football game when she took the opening kickoff of the second half of the Commodores' game against the Missouri Tigers with a 30-yard squib kick on November 28, 2020. [7] [8] [9] (It is important to note that the term "Power Five" was not in use when Katie Hnida became the first woman to score in an NCAA Division I-A game in 2003; Hnida played at the Mountain West Conference, which did not have Automatic Qualifying status in the Bowl Championship Series. [10] )

Jennifer Welter became the first female skill position player at the male professional level by playing as a running back in the Texas Revolution in 2014.

To date, no women have ever tried to play a line position above the high school level. Holley Mangold, whose brother Nick played several years in the NFL and who herself played as a lineswoman in high school, declined to further pursue football in college, fearing she had no chance to play professionally as a woman; she later went on to become an Olympic weightlifter. [11]

Brittanee Jacobs is the first female football coach at the collegiate level. She helped coach safeties at Central Methodist University during the 2012 season. [12] Welter became the first female coach at the professional level when she took a preseason position with the Arizona Cardinals in 2015; a year later, Kathryn Smith, who had spent several years as a front office assistant, took a quality control coaching position with the Buffalo Bills, making her the first permanent female coach in National Football League history. In 2020, Callie Brownson became the first woman to coach an NFL position group in a regular-season game when she filled in for the Cleveland Browns tight ends coach Drew Petzing. [13]

The world governing body for American football associations, the International Federation of American Football (IFAF), held the first Women's World Cup in Stockholm, Sweden, in 2010. Six nations participated in the inaugural event: Austria, Canada, Finland, Germany, Sweden, and the United States. The United States won the gold by beating Canada, 66–0. The 2013 World Championship, in Finland, was held from 30 June 2013 to 7 July 2013. The United States won gold again, beating Sweden 84-0 and Germany 107–7 in order to make it to the gold medal match with Canada, whom they beat 64–0. In the 2017 IFAF Women's World Championship, held in Canada, the six teams invited were; Australia, Canada, Finland, Great Britain, Mexico and the United States. The United States continued their dominance, claiming gold, while Canada and Mexico won silver and bronze respectively.

IFAF has confirmed Palma, located on the Spanish island of Mallorca, Spain as host for 2021 IFAF Flag Football World Championship from October 6 to 10 2021. It will be the first time Spain has staged the World Championships which have been held since 1998. Normally conducted every two years, Denmark was scheduled to host the 2020 edition only for it to be cancelled due to the coronavirus pandemic. [14]

Katharine Anne Hnida is a former American football player who became the first woman to score in an NCAA Division I-A game, college football's highest level. She accomplished this as placekicker for the University of New Mexico Lobos on August 30, 2003.

Football Canada is the governing body for amateur gridiron football in Canada.

Elizabeth Heaston Thompson is an American athlete who is the first woman ever to score in a college football game. She accomplished this feat on October 18, 1997 as a placekicker for the Willamette Bearcats football team of Willamette University, which then competed in the National Association of Intercollegiate Athletics (NAIA) for small colleges. She also played women's soccer for Willamette. Heaston's accomplishment was widely noted by the media and the sports community.

Ashley Martin is an American athlete who became the first woman to play and score in an NCAA Division I American football game, and one of the first ever to score points in any college football game. She accomplished this feat August 30, 2001, as a placekicker for the Jacksonville State University Gamecocks, where she also played on the women's soccer team. Martin played at Division I-AA. The only earlier female player to score in a college football game was Liz Heaston, who kicked for Willamette University, a National Association of Intercollegiate Athletics (NAIA) school, in 1997. 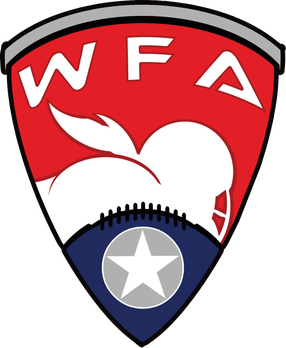 Julie Harshbarger is an American football placekicker who is currently a free agent. She is most known for being the first woman to score a field goal in Indoor football, as a member of the Chicago Cardinals of the Continental Indoor Football League (CIFL), and, at seven seasons and counting, having the longest documented career for a woman playing professional football in leagues dominated by men.

PatriciaPalinkas is credited as the first and, until Katie Hnida signed with the Fort Wayne Firehawks in 2010, the only woman to play American football professionally in a league made predominately of men. She was a holder for her husband Stephen Palinkas for the minor league Orlando Panthers in the Atlantic Coast Football League. She attended Northern Illinois University, however she did not play for their football team.

Tonya Butler is an American athlete who is the first woman ever to score a field goal in a college football game. She accomplished this feat on September 13, 2003, as a placekicker for the University of West Alabama Tigers, which was competing in the National Collegiate Athletic Association (NCAA) Division II. She also played women's soccer for Georgia Southern.

José Carlos Maltos Diaz is a professional gridiron football placekicker for the Ottawa Redblacks of the Canadian Football League (CFL). The Redblacks selected him second overall in the 2019 CFL–LFA Draft. He was originally signed by the New Orleans Saints of the National Football League (NFL) in 2013, but was released following training camp. He played college football for UANL. 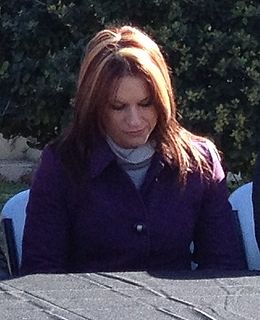 Jennifer Welter is an American football coach who was most recently a defensive specialist for the Atlanta Legends of the Alliance of American Football (AAF). She was a defensive coaching intern for the National Football League's Arizona Cardinals during their training camp and the 2015 preseason, making her the first female coaching intern in the NFL. This is her third "first" for men's football in 2014 and 2015. 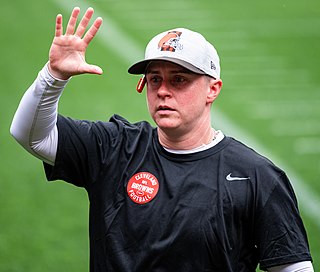 Callie Brownson is an American football coach and player who is the chief of staff for the Cleveland Browns of the National Football League (NFL). In September 2018, she became the first woman hired as a full-time NCAA Division I coach, when she was promoted by Dartmouth, after briefly working as an intern for the team.

Sarah Fuller is an American college soccer goalkeeper for the North Texas Mean Green. She began her college career with the Vanderbilt Commodores, where she also played college football as a placekicker.