Last updated January 26, 2022
Land covered in trees
This article is about the type of forest. For other uses, see Woodland (disambiguation).

listen )) is, in the broad sense, land covered with trees, [1] [2] or in a narrow sense, synonymous with wood (or in the U.S., the plurale tantum woods), a low-density forest forming open habitats with plenty of sunlight and limited shade (see differences between British, American, and Australian English explained below). Woodlands may support an understory of shrubs and herbaceous plants including grasses. Woodland may form a transition to shrubland under drier conditions or during early stages of primary or secondary succession. Higher-density areas of trees with a largely closed canopy that provides extensive and nearly continuous shade are often referred to as forests.

Extensive efforts by conservationist groups have been made to preserve woodlands from urbanization and agriculture. For example, the woodlands of Northwest Indiana have been preserved as part of the Indiana Dunes. [3] [4] [5]

Woodland is used in British woodland management to mean tree-covered areas which arose naturally and which are then managed, while forest is usually used in the British Isles to describe plantations, usually more extensive, or hunting Forests, which are a land use with a legal definition and may not be wooded at all. [6] The term ancient woodland is used in British nature conservation to refer to any wooded land that has existed since 1600, and often (though not always) for thousands of years, since the last Ice Age [6] (equivalent to the American term old-growth forest).

Woodlot is a closely related term in American forest management, which refers to a stand of trees generally used for firewood. While woodlots often technically have closed canopies, they are so small that light penetration from the edge makes them ecologically closer to woodland than forest.

In Australia, a woodland is defined as an area with sparse (10–30%) cover of trees, and an open woodland has very sparse (<10%) cover. Woodlands are also subdivided into tall woodlands, or low woodlands, if their trees are over 30 m (98 ft) or under 10 m (33 ft) high respectively. This contrasts with forests, which have greater than 30% cover by trees. [7]

Sudden oak death (SOD), an oak disease, results from Phytophthora ramorum , a pathogen that thrives in moist, humid conditions. [8] This causal agent attacks the phloem and cambium of oaks, allowing beetle and fungi infestation. It has killed millions of tanoaks since it was discovered in the mid-1990s. SOD does not affect white oaks and drier areas like foothill woodlands, but affects forests and more moist conditions like live oak woodlands and forests, which have been significantly impacted. [8] 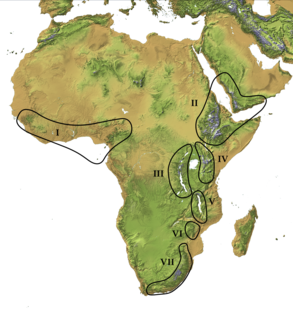 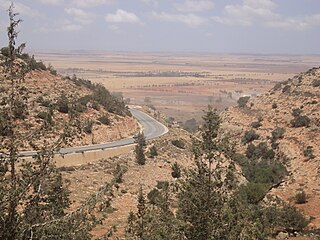 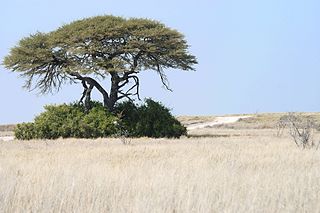 Angolan mopane woodlands are situated in southwestern Angola, extending into northern Namibia. This ecosystem surrounds Etosha Pan, which is considered a separate ecoregion. The mopane trees are the main type of vegetation.

The Zambezian cryptosepalum dry forests, also known as the Zambezian evergreen dry forests, is a tropical dry broadleaf forest ecoregion of Southern Africa. It consists of several areas of thick forest in western Zambia and adjacent Angola. It is one of the largest areas of tropical evergreen forest outside the equatorial zone. 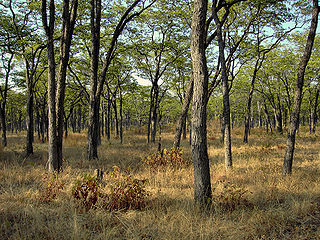 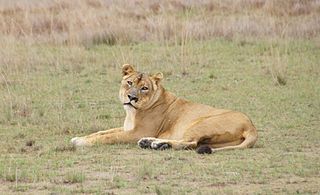 The Western Zambezian grasslands is a tropical grassland ecoregion of eastern Zambia and adjacent parts of Angola. It is situated in two sections, to the north and south of the Barotse Floodplain. The region supports herds of ungulates, including Zambia's largest herd of Blue Wildebeast ).

The Southern miombo woodlands is a tropical grasslands and woodlands ecoregion extending across portions of Malawi, Mozambique, Zambia, and Zimbabwe.