Elwood Otto "Woody" Wagenhorst (June 3, 1863 – February 12, 1946) was an American football and baseball player and coach. He played Major League Baseball as a third baseman for the Philadelphia Quakers in 1888. In two career games, he had one hit in eight at-bats. [1] Wagenhorst served as the head football coach at the University of Pennsylvania from 1888 to 1891, compiling a record of 39–18.

Wagenhorst was born in Gouldsboro, Pennsylvania in 1863. He played baseball and football while attending Princeton University (then known as the College of New Jersey). At the time of his graduation from Princeton, on June 8, 1888, he debuted at third base for the Philadelphia Quakers in the National League. After playing in only two games, Wagenhorst soon accepted an invitation to become coach of Penn's second paid football team, succeeding Frank Dole. For his coaching duties, Wagenhorst was paid $275. [2]

In the fall of 1888 as Wagenhorst served the Penn football team as its coach, trainer and he even played end briefly that season. In 1889, while coaching at Penn, Wagenhorst enrolled in Law School. As a Penn law student, Wagenhorst also became third-baseman and captain of the school's 1890 and 1891 baseball teams.

After graduating in 1892, he became a private secretary for Republican member of the U.S. House of Representatives from Pennsylvania and later Mayor of Philadelphia, John E. Reyburn. Wagenhorst later practiced law in Washington D. C. until his death in 1946. [3]

Arthur Albert Irwin, nicknamed "Doc", "Sandy", "Cutrate" or "Foxy", was a Canadian-American shortstop and manager in Major League Baseball (MLB) during the late nineteenth century. He played regularly in the major leagues for eleven years, spending two of those seasons as a player-manager. He played on the 1884 Providence Grays team which won the first interleague series to decide the world champions of baseball. Irwin then served as a major league manager for several years. 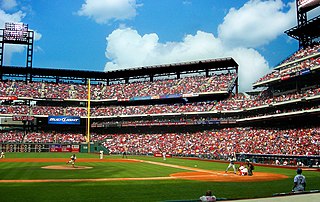 Charles J. "Charlie" Ferguson was an American right-handed pitcher in Major League Baseball who played his entire four-year career for the Philadelphia Quakers. When not pitching, he increasingly played in the outfield and – in his final season – at second base.

King Solomon "Sol" White was an American professional baseball infielder, manager and executive, and one of the pioneers of the Negro leagues. An active sportswriter for many years, he wrote the first definitive history of black baseball in 1907. He was elected to the Baseball Hall of Fame in 2006.

Carl Sheldon "Cap" Williams was an American football player, coach, and ophthalmologist. He played college football at Oberlin College and the University of Pennsylvania during the 1890s. He returned to Penn and served as the head football coach there from 1902 to 1907, compiling a record of 60–10–4. His Penn Quakers teams of 1904 and 1907 have been recognized as national champions. Williams later practiced ophthalmology for many years in Philadelphia.

Donald Stafford "Red" Kellett was the President and General Manager of the Baltimore Colts franchise of the National Football League from 1953 until 1966. He also had a brief playing career in Major League Baseball as an infielder for the Boston Red Sox.

The Penn Quakers football program is the college football team at the University of Pennsylvania in Philadelphia, Pennsylvania. The Penn Quakers have competed in the Ivy League since its inaugural season of 1956, and are currently a Division I Football Championship Subdivision (FCS) member of the National Collegiate Athletic Association (NCAA). Penn has played in 1,364 football games, the most of any school in any division. Penn plays its home games at historic Franklin Field, the oldest football stadium in the US. All Penn games are broadcast on WNTP or WFIL radio.

William James "Buster" Hoover was an American outfielder in Major League Baseball. He played for the Philadelphia Keystones, Philadelphia Quakers, Baltimore Orioles, and Cincinnati Reds between 1884 and 1892. Described as a "long legged heavy hitter", Hoover was among his league's leaders in several offensive statistics during his 12-year professional baseball career. In 127 career major league games, Hoover had a batting average of .288. He stood 6 feet 1 inch (1.85 m) and weighed 178 pounds (81 kg).

Jesse Hall "Pete" Allen was a professional baseball player whose career spanned two seasons, including a part of one in Major League Baseball with the Cleveland Spiders (1893). Allen played one game in the majors and went hitless four at-bats. In that game, Allen played catcher. He also played in the minor leagues with the Binghamton Bingoes (1893) and the New Castle, Pennsylvania baseball team (1895). During Allen's time in the minors, he played catcher and outfielder. After his baseball career was over, Allen enrolled in the University of Pennsylvania School of Medicine where he graduated in 1897. Soon after, Allen began practicing medicine, specializing in proctology.

Edwin M. Carfrey was an American baseball player. Carfrey had a career that spanned nearly 20 years in organized baseball. He played Major League Baseball for the Philadelphia Athletics in 1890. He also played minor league baseball for several teams from 1882 to 1899. He also participated in a December 1891 exhibition of indoor, winter baseball played with a hair-filled ball measuring 19 inches in diameter and with bats reportedly resembling cut-off broomsticks.

Arthur Slaymaker Herman was an American football and baseball player and coach. He played college football and baseball for Franklin & Marshall College from 1913 to 1916. He also played two years of professional baseball as a second baseman for the Hanover Hornets and the Gettysburg Ponies of the Blue Ridge League. In 1969, he became one of the inaugural inductees into the Franklin & Marshall College Athletics Hall of Fame.

Keven McDonald is an American former basketball player known for his collegiate career at the University of Pennsylvania from 1974 to 1978 with the Penn Quakers men's basketball team. He won the Robert V. Geasey Trophy as a junior and was named the Ivy League Player of the Year as a senior. Following his career at Penn, McDonald was selected in the 1978 NBA Draft by the Seattle SuperSonics as the 42nd overall pick. He went on to earn a law degree from Rutgers Law School–Newark and is now a licensed attorney and real estate investor in New Jersey.

The 1893 Penn Quakers football team represented the University of Pennsylvania in the 1893 college football season. The Quakers finished with a 12–3 record in their second year under head coach and College Football Hall of Fame inductee, George Washington Woodruff. Significant games included victories over Navy (34–0), Penn State (18–6), Lafayette (82–0), and Cornell (50–0), and losses to national champion Princeton (4–0), Yale (14–6), and Harvard (26–4). The 1893 Penn team outscored its opponents by a combined total of 484 to 62. No Penn players were honored on the 1893 College Football All-America Team, as all such honors went to players on the Princeton, Harvard and Yale teams.

The 1891 Penn Quakers football team represented the University of Pennsylvania in the 1891 college football season. The Quakers finished with an 11–2 record in their fourth year under head coach E. O. Wagenhorst. Significant games included victories over Rutgers (32–6), Lafayette, and Lehigh, and losses to Princeton (24–0) and undefeated national champion Yale (48–0). The 1891 Penn team outscored its opponents by a combined total of 267 to 109. Penn center John Adams was selected by Caspar Whitney as a first-team player on the 1891 College Football All-America Team.

The 1890 Penn Quakers football team represented the University of Pennsylvania in the 1890 college football season. The Quakers finished with an 11–3 record in their third year under head coach E. O. Wagenhorst. Significant games included victories over Rutgers, Penn State (20–0), and Lehigh, and losses to Princeton (6–0) and Yale (60–0). The 1890 Penn team outscored its opponents by a combined total of 259 to 134. No Penn players were honored on the 1890 College Football All-America Team.

The 1888 Penn Quakers football team was an American football team that represented the University of Pennsylvania during the 1888 college football season. In its first season under head coach Woody Wagenhorst, the team compiled a 9–7 record and outscored opponents by a total of to. Halfback Tom Hulme was the team captain. The team played its home games at the University Athletic Grounds located at 37th and Spruce Streets.