The ICF was initially formed in 1966 as a committee of the Royal Caledonian Curling Club in Perth after the success of the Scotch Cup series of world championships held between Canada and Scotland. At the outset, it comprised the associations of Scotland, Canada, Sweden, Norway, Switzerland, and the United States. In the wake of its formation, it sanctioned the World Curling Championships. The WCF currently sanctions fifteen international curling events (see below). The WCF is managed by eight Board Directors, one president, three vice-presidents (one from each WCF regional zone - Americas, Europe, Pacific-Asia) and six Board Directors. The six Board Directors must all come from different member associations. All positions on the Board of Directors are elected by WCF member associations. The Board of Directors are supported by and a permanent staff of 20 employees.

There are currently 67 member associations, with the most recent addition being the Kenya Curling Federation in 2021. [2]

The WCF mission statement reads: "The World Curling Federation represents curling internationally and facilitates the growth of the sport through a network of Member Associations/Federations." [3]

The purpose and aims of the WCF are as follows: [4]

Following is a list of member associations of the World Curling Federation: [5]

*The Armenia Curling Federation was suspended for failure to pay subscriptions. [37]

The current executive board as of September 2018 is as follows: [39]

Former presidents of the WCF and ICF are listed below: [40]

The WCF manages many events around the world. [41]

The WCF World Rankings system is designed to track and list the amount of success achieved by each member association of the World Curling Federation (WCF) in a given curling season. The system, which was implemented in December 2006, is similar to the ranking system used by FIFA. The events taken into account when calculating each nation's score include the Olympic and Paralympic games, the World Curling Championships, and the various qualifying events for member associations who did not compete in the worlds. The system was developed by Patrick Hürlimann, who is a former Olympic champion and was the vice president of the WCF from 2010 to 2012. The calculation method was overhauled for the 2018–19 season. 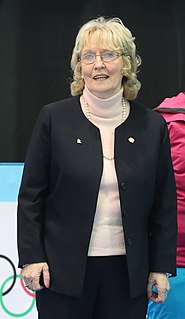 Kate Caithness is a Scottish curler. She serves as the current President of the World Curling Federation.

Sven Axel Tankred Eklund (1916–1997) was a Swedish curler. He was the alternate on the team that represented Sweden during the 1963 Scotch Cup, the World Men's Curling Championship at the time. He was also a former president of the World Curling Federation and is a WCF Hall of Fame inductee.

Viktor Kim is a Kazakhstani curler and curling coach.

The German Curling Association (DCV) is the national governing body of the sport of curling in Germany.

Isobel Hannen is a Scottish curler and curling coach.

Curling at the 2020 Winter Youth Olympics took place at the Palladium de Champéry in Champéry, Switzerland from 10 to 22 January 2020.

Curling was inducted at the Youth Olympic Games at the inaugural edition in 2012.

The 2021 World Women's Curling Championship will be held from 30 April to 9 May at the Markin McPhail Centre at Canada Olympic Park in Calgary, Alberta.

The 2021 World Men's Curling Championship is currently being held, from April 2 to 11 at the Markin MacPhail Centre at Canada Olympic Park in Calgary, Canada.