The World Pool-Billiard Association (WPA) is the international governing body for pool (pocket billiards). It was formed in 1987, and was initially headed by a provisional board of directors consisting of representatives from Japan, the United States, Sweden, and Germany. as of February 2019 [update] , the WPA president is Ian Anderson of Australia. It is an associate of the World Confederation of Billiards Sports (WCBS), the international umbrella organization that encompasses the major cue sports.

Many European players, who had the European Championships as their highest level of competition, have been aware of pool events in the United States; they were dissatisfied with the development of the sport in the continent, and wanted to compete at a higher level. In 1976, the Europeans held a world championship in Japan, which spawned some interest and initial contacts with Asia. However, most of the efforts were initiated by individuals or national organizations, and progressed slowly.

In November 1987, at a European Pocket Billiard Federation (EPBF) board meeting in Germany, the idea of a worldwide competition resurfaced. The EPBF board members used their own money to fund a group to create a logo, letterheads and communications with various pool organizations. Kazuo Fujima of Japan replied that Asia was interested in participating. The group's general assembly was held in conjunction with the 1988 European Championships in Stockholm, Sweden. The group also formed a provisional board that consisted of Kazuo Fujima (Japan), Paul Gerni (USA), Jorgen Sandman (Sweden), and Horst Vondenhoff (Germany). [1]

In March 1990, the inaugural WPA World Nine-ball Championship was held in Bergheim, Germany. The playing field included 32 men and 16 women in separate divisions, and has since become an annual event. [1]

On March 3, 1990, the World Pool-Billiard Association was sanctioned by the general assembly as the international governing body for pool. The acronym WPA was selected so it would not conflict with the existing Women's Professional Billiard Association (WPBA). [1]

Membership in the WPA has grown since its inception. In 1991, Australia and New Zealand, under the umbrella of the Australasian Pool Association, became members. In 1999, the organizations associated with Latin America and the Caribbean became members, and in 2000, a substantial portion of the organizations from Africa joined. [1]

The WPA members are grouped by six continental/regional confederations, who in turn, consist of members from a country's national federation. The chart and table shows the WPA's members as of October 2017 [update] : [2] 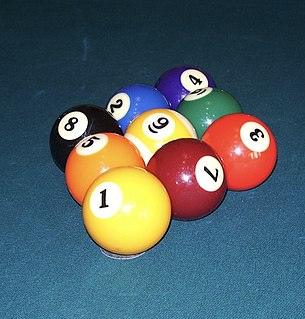 Nine-ball is a discipline of the cue sport pool. The game's origins are traceable to the 1920s in the United States. It is played on a rectangular billiard table with pockets at each of the four corners and in the middle of each long side. Using a cue stick, players must strike the white cue ball to pocket nine colored billiard balls in ascending numerical order. An individual game is won by the player pocketing the 9-ball. Matches are usually played as a race to a set number of racks, with the player who reaches the set number winning the match. 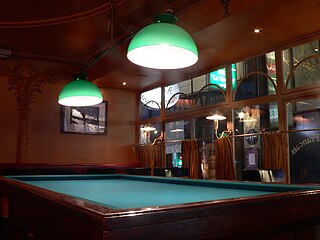 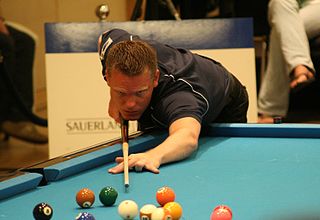 Ewa Mataya Laurance is a Swedish–American professional pool player, most notably on the Women's Professional Billiard Association nine-ball tour, a sports writer, and more recently a sports commentator for ESPN. In 2004, she was inducted into the Billiard Congress of America's Hall of Fame. She has been nicknamed "the Leading Lady of Billiards" and "the Striking Viking". 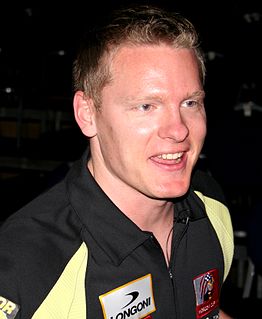 Niels Feijen is an professional pool player, from the Hague, Netherlands. His nickname is "the Terminator". In 2014 he won the WPA World 9-ball championship.

The WPA World Nine-ball Championship is an annual, international, professional nine-ball pool tournament, founded in 1990, sanctioned by the World Pool-Billiard Association (WPA), and principally sponsored and organised by Matchroom Sport. It is divided into men's, women's and wheelchair Divisions. Since 2010, it is held in Doha, Qatar.

The World Eightball Pool Federation (WEPF) is an international pool governing body overseeing international tournaments and rankings in eightball pool. WEPF competes for authority and membership with the World Pool-Billiard Association (WPA), which produces its own tournaments and slightly different rules under the game name blackball. 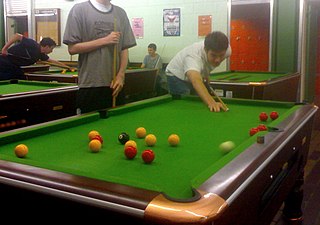 Blackball pool, also known as reds and yellows and English eight-ball, is a pool game originating in the United Kingdom and popularized across Europe and The Commonwealth, such as Australia and South Africa. In the UK and Ireland it is usually called simply "pool". The game is played with sixteen balls on a small pool table with six pockets. 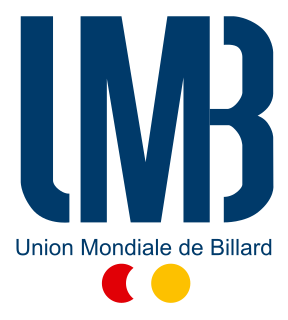 The 2010 WPA World Nine-ball Championship was the professional nine-ball pocket billiards (pool) championship, sanctioned by the World Pool-Billiard Association (WPA) and organised by Matchroom Sport. It was held from 29 June through 5 July in Doha, Qatar, hosted by the Qatar Billiards and Snooker Federation. Qualifying tournaments were held from 25 through 29 June in the same city.

Stefano Pelinga is an Italian professional pool player from Rome. He is best known as a multi-year international artistic pool champion, as both an individual and team captain. He has also served as an officer for the Polizia di Stato for 27 years, retiring from police work in 2011, then moving to Las Vegas, Nevada to play pool full-time. Pelinga has served as a board member of the International Artistic Poolplayers Association (IAPA). He was the featured player on the cover of the May 2010 issue of Billiards Digest magazine, which named him one of the world's best trick shot artists. He has been nicknamed "Mr. Trick Shots" and "Il Maestro". Aside from competition, Pelinga performs exhibitions, organizes competitions and raises funds for a variety of charitable organizations with his personal appearances. He was invited to tour in the USA with Paul Gerni, Norway's Lars Riiber, and Japan's Yoshikazu Kimura, and nominated by Paul Gerni for a spot on ESPN's Trick Shot Magic, where he has been featured for over ten years. He won two Trick Shot Magic events, in 2005 and 2007, after a few second places.

Alexander Kazakis is a Greek professional pool player. Kazakis is a former European 10-ball champion, and regular 9-ball player. In 2018, he was the number one ranked player by the World Pool-Billiard Association.

The 2019 WPA Players Championship was a 9-Ball pool international event held in Las Vegas, Nevada. The event was organized jointly by the World Pool-Billiard Association (WPA) and CueSports International (CI). The event was played with alternate break rules, from a field of 64, with players qualifying from tours such as the WPA and European Pocket Billiard Federation.

Radosław Babica is Polish pool player from Kielce, who reached number 12 in the World Pool-Billiard Association world rankings in 2009.