The Wudang Mountains (simplified Chinese :武当山; traditional Chinese :武當山; pinyin :Wǔdāng Shān) consist of a mountain range in the northwestern part of Hubei,China,just south of Shiyan. They are home to a famous complex of Taoist temples and monasteries associated with the Lord of the North,Xuantian Shangdi. The Wudang Mountains are renowned for the practice of Tai chi and Taoism as the Taoist counterpart to the Shaolin Monastery, [1] which is affiliated with Chinese Chán Buddhism. The Wudang Mountains are one of the "Four Sacred Mountains of Taoism" in China,an important destination for Taoist pilgrimages. The monasteries such as the Wudang Garden [1] were made a UNESCO World Heritage Site in 1994 because of their religious significance and architectural achievement. [2]

On Chinese maps,the name "Wudangshan" (Chinese :武当山) is applied both to the entire mountain range (which runs east-west along the southern edge of the Han River,crossing several county-level divisions of Shiyan),and to the group of peaks located within Wudangshan subdistrict of Danjiangkou,Shiyan. It is the latter specific area which is known as a Taoist center. [3]

Modern maps show the elevation of the highest of the peaks in the Wudang Shan "proper" as 1612 meters; [3] [4] however,the entire Wudangshan range has somewhat higher elevations elsewhere. [3]

Some consider the Wudang Mountains to be a "branch" of the Daba Mountains range, [4] which is a major mountain system in western Hubei,Shaanxi,Chongqing and Sichuan.

For centuries,the mountains of Wudang have been known as an important center of Taoism,especially famous for its Taoist versions of martial arts or Taichi. [5]

The first site of worship—the Five Dragons Temple—was constructed at the behest of Emperor Taizong of Tang. [2] Further structures were added during the Song and Yuan dynasties,while the largest complex on the mountain was built during the Ming dynasty (14th–17th centuries) as the Yongle Emperor claimed to enjoy the protection of the god Beidi or Xuantian Shangdi. [2] During the Ming Dynasty,9 palaces,9 monasteries,36 nunneries and 72 temples were located at the site. [2] Temples regularly had to be rebuilt,and not all survived;the oldest existing structures are the Golden Hall and the Ancient Bronze Shrine,made in 1307. [2] Other noted structures include Nanyang Palace (built in 1285–1310 and extended in 1312),the stone-walled Forbidden City of the Taihe Palace at the peak (built in 1419),and the Purple Cloud Temple (built in 1119–1126,rebuilt in 1413 and extended in 1803–1820). [2] [6] Today,53 ancient buildings still survive. [2]

On January 19,2003,the 600-year-old Yuzhengong Palace at the Wudang Mountains burned down after accidentally being set on fire by an employee of a martial arts school. [7] A fire broke out in the hall,reducing the three rooms that covered 200 square meters to ashes. A gold-plated statue of Zhang Sanfeng,which was usually housed in Yuzhengong,was moved to another building just before the fire,and so escaped destruction in the inferno. [5]

At the first national martial arts tournament organized by the Central Guoshu Institute in 1928, participants were separated into practitioners of Shaolin and Wudang styles. Styles considered to belong to the latter group—called Wudangquan—are those with a strong element of Taoist neidan exercises. Typical examples of Wudangquan are Taijiquan, Xingyiquan and Baguazhang. According to legend, Taijiquan was created by the Taoist hermit sage Zhang Sanfeng, who lived in the Wudang mountains. [8]

Wudangquan has been partly reformed to fit the PRC sport and health promotion program. The third biannual Traditional Wushu Festival was held in the Wudang Mountains from October 28 to November 2, 2008. [9]

Neijia is a term in Chinese martial arts, grouping those styles that practice neijing, usually translated as internal martial arts, occupied with spiritual, mental or qi-related aspects, as opposed to an "external" approach focused on physiological aspects. The distinction dates to the 17th century, but its modern application is due to publications by Sun Lutang, dating to the period of 1915 to 1928. Neijing is developed by using neigong, or "internal exercises", as opposed to "external exercises".

Zhang Sanfeng refers to a legendary Chinese Taoist who many believe invented T'ai chi ch'üan. However, other sources point to early versions of Tai Chi predating Sanfeng. He was purported to have achieved immortality. 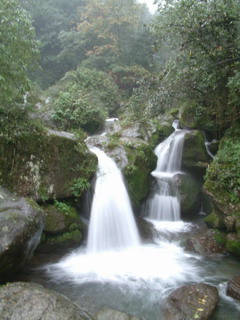 Mount Qingcheng is a mountain in Dujiangyan, Chengdu, Sichuan, China.

Shiyan is a prefecture-level city in northwestern Hubei, China, bordering Henan to the northeast, Chongqing to the southwest, and Shaanxi to the north and west. At the 2020 census, its population was 3,209,004 of whom 1,033,407 lived in the built-up area made of 2 urban districts of Maojian and Zhangwan on 1,193 square kilometres as Yunyang is not conurbated. In 2007, the city was named China's top ten livable cities by Chinese Cities Brand Value Report, which was released at 2007 Beijing Summit of China Cities Forum.

The Nanyan Temple is a temple in Wudang Mountains, Danjiangkou, Hubei, China. It is known as the place where Emperor Zhen Wu found Taoism and flew to heaven. The whole structure - hall-pillars, beams, arches, gates and windows - is created out of rock.

Huaquan is a style of Long Fist Kung Fu (Changquan) which is believed to have originated in the Former Song Dynasty around the Hua Shan area of Shaanxi Province.

The Jiuyang Zhenjing, also known as the Nine Yang Manual, is a fictional martial arts manual in Jin Yong's Condor Trilogy. It was first introduced briefly at the end of the second novel The Return of the Condor Heroes. It plays a significant role in the third novel The Heaven Sword and Dragon Saber after Zhang Wuji discovers it and masters the skills in the book. 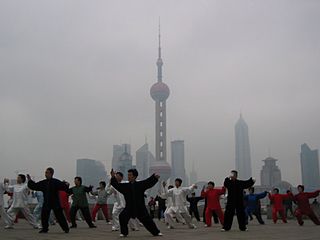 There are hundreds of different styles of Chinese martial arts, each with their own sets of techniques and ideas. The various movements in kung fu, most of which are imitations of the fighting styles of animals, are initiated from one to five basic foot positions: normal upright posture and the four stances called dragon, frog, horse riding, and snake. The concept of martial arts styles appeared from around the Ming dynasty (1368–1644). Before the Ming period, martial skills were commonly differentiated mainly by their lineage. There are common themes among these styles which allow them to be grouped according to generalized "families", "fractions", "class", or "schools" of martial art styles. There are styles that mimic movements from animals, or otherwise refer or allude to animals or mythical beings such as dragons, and others that gather inspiration from various Chinese philosophies or mythologies. Some deeply internal styles tend to focus strongly on practice relating to harnessing of qi energy, while some more-conspicuously external styles tend more to display skills and abilities in competition or exhibition.

Danjiangkou is a county-level city in northwestern Hubei, China, bordering Henan province to the northeast. The city spans an area of 3,121 square kilometers, and has a population of approximately 478,000 as of 2017.

Mount Longhu is located in Yingtan, Jiangxi, China. It is famous for being one of the birthplaces of Taoism, with many Taoist temples built upon the mountainside. It is particularly important to the Zhengyi Dao as the Shangqing Temple and the Mansion of the Taoist Master are located here. It is known as one of the Four Sacred Mountains of Taoism.

Xuanwu or Xuandi, also known as Zhenwu or Zhenwudadi, is a powerful deity in Chinese religion, one of the higher-ranking deities in Taoism. He is revered as a powerful god, able to control the elements and capable of great magic. He is identified as the god of the north Heidi (黑帝, lit. 'Black Emperor' and is particularly revered by martial artists. He is the patron god of Hebei, Henan, Manchuria and Mongolia. As some Han Chinese migrated into the south from Hebei and Henan during the Tang-Song era, Xuanwu is also widely revered in the Guangdong, Guangxi and Fujian provinces, as well as among the overseas diaspora.

The Wudang Sect, sometimes also referred to as the Wu-tang Sect or Wu-Tang Clan, is a fictional martial arts sect mentioned in several works of wuxia fiction. It is commonly featured as one of the leading orthodox sects in the wulin. It is named after the place it is based, the Wudang Mountains.

Chen Wangting (1580–1660), courtesy name Zouting (奏廷), was a Ming dynasty officer who founded Chen-style t'ai chi ch'uan, one of the five major styles of the popular Chinese martial art. Sometimes called Chen Wang Ting, he devised the Chen family-style of t'ai chi ch'uan in his home of Chenjiagou, Wenxian county, Henan province after he retired there following the fall of the Ming dynasty.

Tang Hao or Tang Fan Sheng (1887–1959) was a Chinese lawyer and expert on chinese martial arts.

Wudang quan is a class of Chinese martial arts. In contemporary China, Chinese martial arts styles are generally classified into two major groups: Wudang (Wutang), named after the Wudang Mountains; and Shaolin, named after the Shaolin Monastery. Whereas Shaolin includes many martial art styles, Wudangquan includes only a few arts that use the focused mind to control the body. This typically encompasses taijiquan, xingyiquan and baguazhang, but must also include Baji chuan and Wudang Sword. Although the name Wudang simply distinguishes the skills, theories and applications of the internal arts from those of the Shaolin styles, it misleadingly suggests these arts originated at the Wudang Mountains. The name Wudang comes from a popular Chinese legend that incorrectly purports the genesis of taijiquan and Wudang Sword by an immortal, Taoist hermit named Zhang Sanfeng who lived in the monasteries of Wudang Mountain. 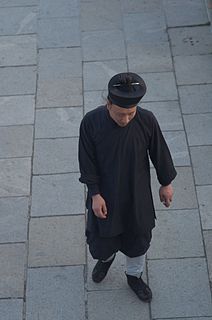 Taoism is a religion with many schools or denominations, of which none occupies a position of orthodoxy. Taoist branches usually build their identity around a set of scriptures, that are manuals of ritual practices. Scriptures are considered "breathwork", that is "configurations of energy" (qi), embodiments of "celestial patterns" (tianwen), or "revelations of structures" (li).

The Temple of the Five Immortals or Five Immortals Temple is a Taoist temple located in Shiyan's Zhangwan District in China's Hubei Province. The temple is situated on the Heavenly Horse peak of White Horse Mountain in the Wudang Mountains. The Wudang Mountains are home to a famous complex of Taoist temples and monasteries and are associated with the Lord of the North, Xuantian Shangdi. The Temple of the Five Immortals is one of the very few temples in the Wudang mountain range which is still maintained by real Taoist monks who dedicate their lives to cultivate the great Tao.