Wyndham is the northernmost town in the Kimberley region of Western Australia, located on the Great Northern Highway, 2,210 kilometres (1,373 mi) northeast of Perth. It was established in 1886 to service a new goldfield at Halls Creek, and it is now a port and service centre for the east Kimberley with a population of 780. Aboriginal and Torres Strait Islander people make up 54% of the population. Wyndham comprises two areas - the original town site at Wyndham Port situated on Cambridge Gulf, and 5 kilometres (3.1 mi) by road to the south, the Three Mile area with the residential and shopping area for the port, also founded in 1886. [2] Wyndham is part of the Shire of Wyndham-East Kimberley.

Wyndham is within traditional Doolboong country. [3]

The first European to visit the area was Phillip Parker King in 1819. He was instructed to find a river 'likely to lead to an interior navigation into the great continent'. He sailed into Cambridge Gulf, which he named after the Duke of Cambridge, and then sailed up a river which was subsequently named after him. Finding no fresh water on the mudflats, he departed.

Wyndham was established on 14 April 1886, by Government Resident and Warden Charles Danvers Price, [4] who led a party including Commissioner of Crown Lands John Forrest on the Adelaide Steamship Company mail steamer SS Albany. [5] [6]

Government Resident Price selected Wyndham as the name for the new town, after Walter George Wyndham, the young stepson of the Governor of Western Australia Sir Frederick Napier Broome. [7] [8]

By late-1886, the town was booming and there were three hotels at the port, one of which was a two-storey building, and two taverns at Three Mile Camp, as well as stores, bootmakers' and butchers' shops, a billiard room, a soda water factory, commission agencies, auctioneers and other businesses. [9] [2] Ships brought in at least five thousand miners who headed off to the Halls Creek goldfields. It is known that during this boom there were times when up to 16 vessels were moored in Cambridge Gulf.

However, by 1888, the gold rush at Halls Creek had ended and the fortunes of Wyndham declined. Wyndham became a tiny settlement serving the pastoral interests in the East Kimberley. By 1912, money had virtually disappeared from the Wyndham economy, and purchases were paid for using promissory notes known as "shinplasters".

In 1942 during World War II, the town and its aerodrome were attacked on four occasions by Japanese aircraft.

In 1913, the Western Australian government started to construct the Wyndham Meatworks to restart the town's economy. The construction efforts were interrupted by the Nevanas affair and World War I, but the meatworks were completed in 1919 to a design by William Hardwick who later became the Principal Architect of Western Australia. [10] The meatworks were the mainstay of the town's economy until their closure in 1985; the town also supported the Air Beef Scheme which ran from 1947 to 1965. [11]

Wyndham is on the eastern side of Cambridge Gulf, an inlet of Joseph Bonaparte Gulf in the Timor Sea. It is surrounded by the Durack, Pentecost and King rivers to the south, Forrest River to the west and Ord River to the north. Much of the land around Wyndham is inhospitable, and includes the Bastion Range and the mudflats of the Cambridge Gulf. The Bastion Range is the site of the 28-square-kilometre (11 sq mi) Wyndham Important Bird Area, identified as such by BirdLife International because it holds the largest known population of endangered Gouldian finches. [12]

Wyndham is served by Wyndham Airport.

The Wyndham Memorial Swimming Pool is a public swimming pool, [16] which was opened on 5 November 1966 by Charles Court. [17]

The Ted Birch Memorial Youth and Recreation Centre is a multi-purpose, community recreation facility. The centre, originally the Wyndham Recreation Centre, was opened on 11 October 2003 by the Shire President Barbara Johnson. [18] The Centre was renamed on 29 May 2014 in honour of Pastor Edward "Ted" Birch. Ted Birch was instrumental in helping establish a youth service in Wyndham. [19] [20] [21]

Wyndham is also the home of the Big Crocodile, a wire and concrete statue of a crocodile around 18 metres (60 ft) long.

For tourists, there are two hotels and a caravan park. The nearby Bastion lookout provides sweeping vistas of the surrounding country including the five rivers named above which emerge into the Cambridge Gulf. The town has a museum in the old courthouse that is open to the public and run by the Wyndham Historical Society. Nearby Wyndham is a Boab Prison Tree.

The Wyndham area was a filming location for: 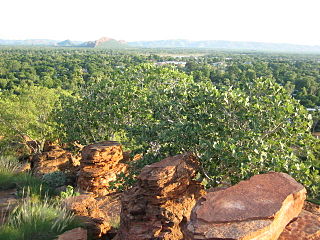 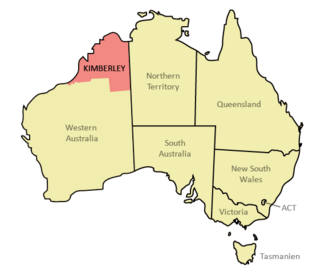 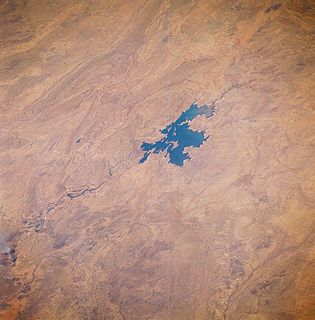 Lake Argyle is Western Australia's largest and Australia's second largest freshwater man-made reservoir by volume. The reservoir is part of the Ord River Irrigation Scheme and is located near the East Kimberley town of Kununurra. The lake flooded large parts of the Shire of Wyndham-East Kimberley on the Kimberley Plateau about 80 kilometres (50 mi) inland from the Joseph Bonaparte Gulf, close to the border with the Northern Territory. 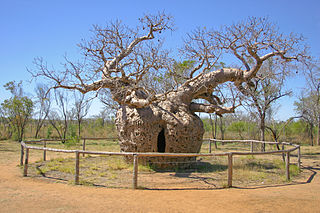 Derby is a town in the Kimberley region of Western Australia. At the 2016 census, Derby had a population of 3,325 with 47.2% of Aboriginal and Torres Strait Islander descent. Along with Broome and Kununurra, it is one of only three towns in the Kimberley to have a population over 2,000. Located on King Sound, Derby has the highest tides in Australia, with the peak differential between low and high tide reaching 11.8 metres (39 ft). 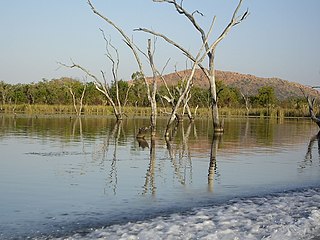 Horizon Power is a commercially focused, state government-owned, power company that provides power supplies to Western Australia. It is responsible for generating, procuring, distributing and retailing electricity to residential, industrial and commercial customers and resource developments in its service area. 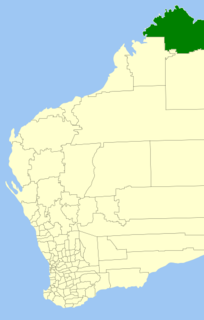 The Shire of Wyndham East Kimberley is one of the four local government areas in the Kimberley region of northern Western Australia, covering an area of 117,514 square kilometres (45,372 sq mi) at Western Australia's northeastern corner. The Shire's seat of government was originally in Wyndham but now in the town of Kununurra, which is home to over half of the Shire's permanent population of around 7,000, while a council office is located at Wyndham. 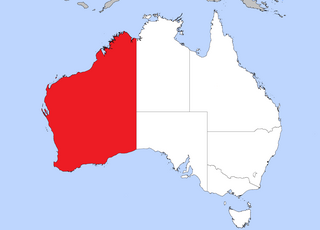 The East Kimberley Regional Airport, locally known as the Kununurra Airport, is an airport in Kununurra, Western Australia. The airport is 2 nautical miles west of the town. Heavy wet seasons often result in this area being cut off from essential outside services and deliveries. The airport is a crucial piece of infrastructure which enables people and goods to enter or leave from the region and especially supports tourism and economic development.

Michael Patrick Durack, was a pastoralist and Western Australian pioneer, known as "M.P." or to the family as "Miguel". He was the son of Patrick Durack and Mary Costello, both Irish-Australians. 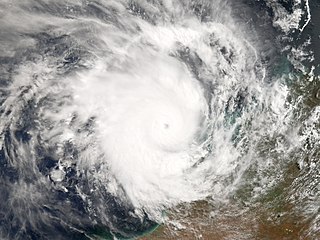 Severe Tropical Cyclone Glenda was among the strongest tropical cyclones to threaten Western Australia, though it weakened considerably before landfall and moved ashore in a lightly populated region. It began as a tropical low on 15 March in the Gulf of Carpentaria. The precursor disturbance drifted over Top End and later across the northeastern portion of Western Australia, and after emerging into the Indian Ocean it strengthened into a tropical storm. Aided by favourable environmental conditions, Glenda rapidly intensified to reach Category 5 status on the Australian cyclone scale, and with a peak intensity of 910 mbar it was among the strongest cyclones on record within the Australia region. On 30 March it moved ashore near Onslow as a Category 3 cyclone, and the next day it degenerated into a remnant tropical low over land.

Cambridge Gulf is a gulf on the north coast of the Kimberley region of Western Australia. Many rivers flow into the gulf, including the Ord River, Pentecost River, Durack River, King River and the Forrest River, making the environment an estuarine one.

Carlton Hill Station is a pastoral lease and cattle station located in the Kimberley region of Western Australia. Situated approximately 39 kilometres (24 mi) to the north-west of Kununurra and 44 kilometres (27 mi) east of Wyndham, the station covers an area of 3,675 square kilometres (1,419 sq mi).

Bow River Station is a pastoral lease that operates as a cattle station in Western Australia. 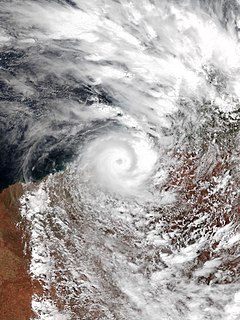 Severe Tropical Cyclone Kelvin was a strong tropical cyclone that impacted Western Australia in February 2018, causing moderate damage. The system was first identified as a weak tropical low on the morning of 11 February over the Northern Territory's Tiwi Islands by the Australian Bureau of Meteorology (BoM). The low moved southwestwards over land and emerged over the Indian Ocean near Broome on 16 February. The storm intensified into a Category 1 tropical cyclone on the following day, becoming the sixth named storm of the 2017–18 Australian region cyclone season. Kelvin subsequently moved slowly eastwards and began to rapidly intensify in the hours prior to landfall. On 18 February, the storm crossed the coast along Eighty Mile Beach as a Category 3 severe tropical cyclone on the Australian scale, and a high-end Category 1 hurricane-equivalent cyclone on the Saffir–Simpson scale. Despite being over land, Kelvin weakened at a slow rate over the next few days, and was downgraded to a tropical low on 19 February. The remnant low of the system drifted over the Outback before being last noted by BoM on 21 February.