Sibe is conventionally viewed[ by whom? ] as a separate language within the southern group of Tungusic languages alongside the more well-known Manchu language, having undergone more than 200 years of development separated from the Tungusic-speaking heartland since Sibe troops were dispatched to the Xinjiang frontiers in 1764. Some researchers such as Jerry Norman hold that Sibe is a dialect of Manchu, whereas Xibologists such as An Jun argue that Sibe should be considered the "successor" to Manchu. Ethnohistorically, the Sibe people are not considered Manchu people, because they were excluded from chieftain Nurhaci's 17th-century tribal confederation to which the name "Manchu" was later applied. [4]

Sibe is mutually intelligible with Manchu, [5] although unlike Manchu, Sibe has reported to have eight vowel distinctions as opposed to the six found in Manchu, as well as differences in morphology, and a more complex system of vowel harmony. [6]

Sibe has seven case morphemes, three of which are used quite differently from modern Manchu. The categorization of morphemes as case markers in spoken Sibe is partially controversial due to the status of numerous suffixes in the language. Despite the general controversy about the categorization of case markers versus postpositions in Tungusic languages, four case markers in Sibe are shared with literary Manchu (Nominative, Genitive, Dative-Locative and Accusative). Sibe's three innovated cases - the ablative, lative, and instrumental-sociative share their meanings with similar case forms in neighboring Uyghur, Kazakh, and Oiryat Mongolian. [8]

The general vocabulary and structure of Sibe has not been affected as much by Chinese as Manchu has. However, Sibe has absorbed a large body of Chinese sociological terminology, especially in politics: like gəming ("revolution", from 革命) and zhuxi ("chairperson", from 主席), [9] and economics: like chūna ("cashier", from 出纳) and daikuan ("loan", from 贷款). Written Sibe is more conservative and rejecting of loanwords, but spoken Sibe contains additional Chinese-derived vocabulary such as nan (from 男) for "man" where the Manchu-based equivalent is niyalma. [4] There has also been some influence from Russian, [10] including words such as konsul ("consul", from консул) and mashina ("sewing machine", from машина). [4] Smaller Xinjiang languages contribute mostly cultural terminology, such as namas ("an Islamic feast") from Uygur and baige ("horse race") from Kazakh. [4]

There was a proposal in China by 1957 to adapt the Cyrillic alphabet to Sibe, but this was abandoned in favor of the original Sibe script. [11] [12]

In 1998, there were eight primary schools that taught Sibe in the Qapqal Xibe Autonomous County where the medium of instruction was Chinese, but Sibe lessons were mandatory. From 1954 to 1959, the People's Publishing House in Ürümqi published over 285 significant works, including government documents, belles-lettres , and schoolbooks, in Sibe. [4] Since 1946, the Sibe-language Qapqal News has been published in Yining. In Qapqal, Sibe-language programming is allocated 15 minutes per day of radio broadcasting and 15 to 30-minute television programmes broadcast once or twice per month. [13]

Sibe is taught as a second language at the Ili Normal University in the Ili Kazakh Autonomous Prefecture of northern Xinjiang; it established an undergraduate major in the language in 2005. [14] A few Manchu language enthusiasts from Eastern China have visited Qapqal Sibe County in order to experience an environment where a variety closely related to Manchu is spoken natively. [15]

The Sibe or Xibo, are a Tungusic-speaking East Asian ethnic group living mostly in Xinjiang, Jilin and Shenyang in Liaoning. The Sibe form one of the 56 ethnic groups officially recognized by China, and had a recorded population of 190,481 in the 2010 Chinese Census, comprising just over 0.014% of China's total population. 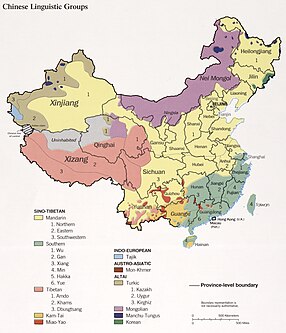 There are several hundred languages in China. The predominant language is Standard Chinese, which is based on central Mandarin, but there are hundreds of related Chinese languages, collectively known as Hanyu, that are spoken by 92% of the population. The Chinese languages are typically divided into seven major language groups, and their study is a distinct academic discipline. They differ as much from each other morphologically and phonetically as do English, German and Danish, but meanwhile share the same writing system (Hanzi) and are mutually intelligible in written form. There are in addition approximately 300 minority languages spoken by the remaining 8% of the population of China. The ones with greatest state support are Mongolian, Tibetan, Uyghur and Zhuang. 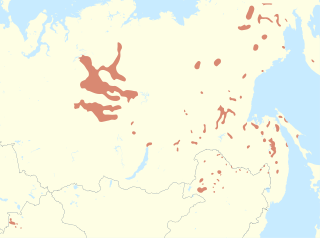 Äynu is a Turkic cryptolect spoken in Western China. Some linguists call it a mixed language, having a mostly Turkic grammar, essentially Yugur, but a mainly Iranian vocabulary. Other linguists argue that it does not meet the technical requirements of a mixed language. It is spoken by the Äynu, a nomadic people, who use it to keep their communications secret from outsiders.

The She language, autonym Ho Ne, or Ho Nte, is a critically endangered Hmong–Mien language spoken by the She people. Most of the over 709,000 She people today speak Shehua. Those who speak Sheyu—approximately 1,200 individuals in Guangdong Province—call themselves Ho Ne, "mountain people".

Qapqal Xibe Autonomous County in Ili Kazakh Autonomous Prefecture in Northern Xinjiang, is the only Xibe autonomous county of the People's Republic of China, bordering Kazakhstan's Almaty Region to the west. It has an area of 4,430 square kilometers and a population 160,000 (2000). Qapqal means "the granary" in the Xibe language.

Naxi, also known as Nakhi, Nasi, Lomi, Moso, Mo-su, is a Sino-Tibetan language or group of languages spoken by some 310,000 people, most of whom live in or around Lijiang City Yulong Naxi Autonomous County of the province of Yunnan, China. Nakhi is also the ethnic group that speaks it, although in detail, officially defined ethnicity and linguistic reality do not coincide neatly: there are speakers of Naxi who are not registered as "Naxi" and citizens who are officially "Naxi" but do not speak it.

The Qapqal News is the world's only newspaper in the Xibe language, a Tungusic language spoken in Northwest China. It is one of roughly fifty minority-language newspapers in the Xinjiang autonomous region of China.

The Mak language is a Kam–Sui language spoken in Libo County, Qiannan Prefecture, Guizhou, China. It is spoken mainly in the four townships of Yangfeng, Fangcun (方村), Jialiang (甲良), and Diwo (地莪) in Jialiang District (甲良), Libo County. Mak speakers can also be found in Dushan County. Mak is spoken alongside Ai-Cham and Bouyei. The Mak are officially classified as Bouyei by the Chinese government.

The Bolyu language is an Austroasiatic language of the Pakanic branch. The Bolyu are among the unrecognized ethnic groups of China.

Nisu is a language cluster spoken by half a million Yi people of China. It is one of six Yi languages recognized by the government of China. The Yi script was traditionally used, though few can still read it. According to Lama (2012), Nisu (Nishu) autonyms include, , and.

The Xong language is the northernmost Hmongic language, spoken in south-central China by around 0.9 million people. It is called Xiangxi Miaoyu in Chinese. In Western sources, it has been called Eastern Miao, Meo, Red Miao and North Hmongic. An official alphabet was adopted in 1956.

Mang, or Mashan Miao also known as Mashan Hmong, is a Miao language of China, spoken primarily in Ziyun Miao and Buyei Autonomous County, southwestern Guizhou province, southwest China. The endonym is Mang, similar to other West Hmongic languages such as Mong.

Pingtang Miao, named after Pingtang County in which it is spoken, is a group of Miao language varieties of China.

Shi Jinbo is a Chinese linguist and Tangutologist.

Raojia is a Hmongic language spoken by about 5,000 people in 3 villages of Heba Township 河坝乡, Majiang County, Guizhou.

The Ili Turks are a Turkic unrecognized ethnic group in China native to Ili Kazakh Autonomous Prefecture in Northern Xinjiang of China, and Kazakhstan. They call themselves "Turk" or "Zhonghua Minzu". Their oral history says they came from the Ferghana Valley, Uzbekistan. The distinct Ili Turki language belongs to the Karluk languages, but is listed as Uzbek by Chinese authorities.

The Bala language is a possibly extinct Southern Tungusic language that was spoken in and around the Zhangguangcai Mountains 张广才岭 of Heilongjiang Province, Northeastern China. No standard orthography exists for the language, although manuscripts have occasionally recorded Bala words using Chinese characters.