Siming District is an urban district of the city of Xiamen, Fujian province, China. It includes the territory of the old town of Xiamen and the government offices of the modern sub-provincial city. 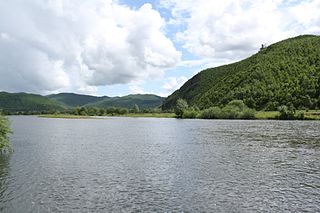 The Greater Khingan Range, is a volcanic mountain range in Northeast China. The range extends roughly 1,200 kilometres (750 mi) from northeast to southwest.

Guan Xing, courtesy name Anguo, was an official of the state of Shu Han in the Three Kingdoms period of China. He was the second son of Guan Yu and a younger brother of Guan Ping.

The Stanovoy Range, also known as Sükebayatur and Sükhbaatar in Mongolian, or Outer Khingan Range is a mountain range located in southeastern parts of the Russian Far East. It runs south-west to north-east for over 900 km, from the Olyokma River in the west, to the Uchur River in the east. almost to the Sea of Okhotsk. It separates the watershed of the Arctic Ocean from that of the Pacific Ocean. For this reason, it was the border between Russia and China from 1689 to 1858.

Cao Xing was a military officer serving under the warlord Lü Bu in the late Eastern Han dynasty of China.

Hsingan refers to a former province, which once occupied western Heilongjiang and part of northwest Jilin provinces of China. The name is related to that of the Greater Khingan Mountains. Another name used for this land was Barga, which is also the name used for the western part of the province, the Barga district.

Daily Air Corporation is an airline with its headquarters in Songshan District, Taipei, Taiwan. It operates scheduled passenger services to offshore islands from Taiwan, including Penghu, Green Island and Orchid Island, as well as helicopter contract services and charters. Its main base is Taipei Songshan Airport, with hubs at Kaohsiung International Airport and Taitung Airport.

Hao Meng was a military officer serving under the warlord Lü Bu in the late Eastern Han dynasty of China.

Xing is a Chinese surname. There are two hypothesized sources for the extant catalogue of surnames:

Gaocheng is a district under the administration of Shijiazhuang in southwestern Hebei province, People's Republic of China, on the upper reaches of the Hutuo River (滹沱河). The city has a total area of 836 square kilometres (323 sq mi) and in 2010 had a population of 743,000.

Xing Yan'an is a Chinese sprinter who specializes in the 100 metres.

Lesser Khingan is a mountain range in China's Heilongjiang Province and the adjacent parts of Russia's Amur Oblast and Jewish Autonomous Oblast.

Dong'an District is a district of the city of Mudanjiang, Heilongjiang province, People's Republic of China.

Qian'an is a county-level city in the northeast of Hebei province, China. It is under the administration of Tangshan City.

Huai'an District is one of the six districts of the city of Huai'an, Jiangsu province, China. The southeast district was formerly named Shanyang County, Huai'an County and Chuzhou District.

Xing'an is the atonal pinyin romanization of various Chinese words and names. It may refer to:

Puyang Xing, courtesy name Ziyuan, was an official of the state of Eastern Wu during the Three Kingdoms period of China. He was the eighth Imperial Chancellor of Eastern Wu.

Lü Jia, or Lữ Gia in Vietnamese, also called Bảo Công (保公), was the prime minister of Nanyue during the reigns of its three last kings.