The Xinle culture (新樂文化) (5500–4800 BC [1] ) was a Neolithic culture in northeast China, found primarily around the lower Liao River on the Liaodong Peninsula in Liaoning. The culture showed evidence of millet cultivation and pig domestication. The type site at Xinle was discovered in the Huanggu District of Shenyang, Liaoning.

The site is named after an old inn, upon whose grounds the remains were first discovered.

The site of the ancient settlement was discovered in the grounds of an old accommodation block for an electrical factory. The accommodation block was called the Xinle Dormitory (新樂宿舍) and hence the discovery was named the Xinle Relic. When it was discovered that the settlement was that of a hitherto unknown civilization, the whole civilization was named after the relic and hence became known as the Xinle civilization. Although more recent discoveries in nearby areas have been extremely significant, especially one in Xinmin, the original name has prevailed.

In 1978, another dig uncovered yet more artifacts including one wooden carving that was some 7,200 years old, presumably a type of totem worshipped by the clan. No other find in the whole of Shenyang has been older, the find is also one of the oldest wooden carvings found anywhere in the world.

The excavations also discovered two Khitan tombs from 1,000 years ago.

In 1984, the Museum of the Xinle Civilization (新樂遺址博物館) was founded.

The museum is divided into two sections, north and south. The southern section contains displays of the various artifacts unearthed during the various excavations that have taken place on the 44-acre (180,000 m2) site. The northern section contains a reconstruction of a 7,000-year-old Xinle village. Some of the houses in the settlement contain representations of life 7,000 years ago.

The year 1974 in archaeology involved some significant events.

The archaeology of Israel is the study of the archaeology of the present-day Israel, stretching from prehistory through three millennia of documented history. The ancient Land of Israel was a geographical bridge between the political and cultural centers of Mesopotamia and Egypt. Despite the importance of the country to three major religions, serious archaeological research only began in the 15th century. The first major work on the antiquities of Israel was Adriaan Reland's Palestina ex monumentis veteribus, published in 1709. Edward Robinson, an American theologian who visited the country in 1838, published the first topographical studies. Lady Hester Stanhope performed the first modern excavation at Ashkelon in 1815. A Frenchman, Louis Felicien de Saucy, embarked on early "modern" excavations in 1850.

Dimini is a village near the city of Volos, in Thessaly, in Magnesia. It was the seat of the municipality of Aisonia. The name Aisonia dates back to ancient times and it is the westernmost place in the Volos area. The Dimini area contains both a Mycenean settlement and a Neolithic settlement. The Neolithic settlement in Dimini was discovered near the end of the 19th century and was first excavated by the archaeologists Christos Tsountas and Valerios Stais. 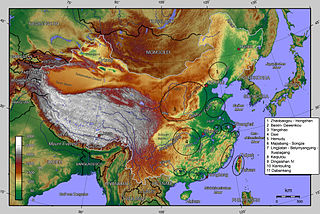 The Hongshan culture was a Neolithic culture in the Liao river basin in northeast China. Hongshan sites have been found in an area stretching from Inner Mongolia to Liaoning, and dated from about 4700 to 2900 BC.

Prehistoric Hong Kong is the period between the arrival of the first humans in Hong Kong and the start of recorded Chinese history first appeared during the Han dynasty. The history of the southern region is reckoned to have been first recorded in 214 BC with Qin Shi Huang conquering the Baiyue and creating the Jiaozhou province.

The Xinglongwa culture (興隆洼文化) was a Neolithic culture in northeastern China, found mainly around the Inner Mongolia-Liaoning border at the Liao River basin. Xinglongwa pottery was primarily cylindrical, and baked at low temperatures.

Achilleion is an early Neolithic site in Thessaly, Greece. It was partly excavated by the American archaeologist Marija Gimbutas. Achilleion is a large site that is practically untouched by archaeologists which Gimbutas claims to be filled entirely with Neolithic debris and hundreds of Neolithic mounds. An excavation was planned because the dig was expected to have a high yield of artifacts and if successful would possibly provide proof of an earlier age of European Neolithic settlement then was previously known. Excavation was started because it was expected that they would find significant numbers of preceramic Neolithic remains. The work started by Marija Gimbutas was stopped because the dig failed to yield any significant findings, but Gimbutas claims that the dig was interrupted by the political unrest caused by the Cyprus conflict.

Karain Cave is a Paleolithic archaeological site located at Yağca Village 27 km (17 mi) northwest of Antalya city in the Mediterranean region of Turkey.

Beifudi is an archaeological site and Neolithic village in Yi County, Hebei, China. The site, an area of 3 ha on the northern bank of the Yishui River, contains artifacts of a culture contemporaneous with the Cishan and Xinglongwa cultures of about 8000–7000 BP, two known Neolithic cultures east of the Taihang Mountains, and thus fills an archaeological gap between the two Northern Chinese cultures. The total excavated area is more than 1,200 square meters and the collection of neolithic findings at the site has been conducted in two phases.

Maidanetske is a village located within the Zvenyhorodka Raion (district) of the Cherkasy Oblast (province), about 235 kilometers (146 mi) driving distance south of Kyiv. It belongs to Talne urban hromada, one of the amalgamated hromadas of Ukraine.

Links of Noltland is an archaeological site near Grobust Bay on the north coast of Westray in Orkney, Scotland. The site contains the remains of both a Neolithic village and later Bronze Age dwellings.

Zayandeh River Culture is a hypothetical pre-historic culture that is theorized to have flourished around the Zayandeh River in Iran in the 6th millennium BC. 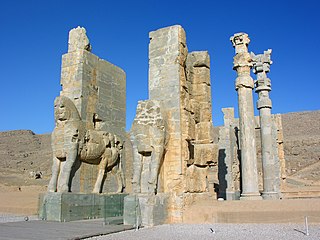 The prehistory of the Iranian plateau, and the wider region now known as Greater Iran, as part of the prehistory of the Near East is conventionally divided into the Paleolithic, Epipaleolithic, Neolithic, Chalcolithic, Bronze Age and Iron Age periods, spanning the time from the first settlement by archaic humans about a million years ago until the beginning historical record during Neo-Assyrian Empire, in the 8th century BC. 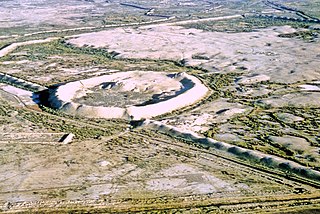 The South Turkmenistan Complex Archaeological Expedition (STACE), also called the South Turkmenistan Archaeological Inter-disciplinary Expedition of the Academy of Sciences of the Turkmen Soviet Socialist Republic (YuTAKE) was endorsed by the Turkmenistan Academy of Sciences. It was initially organized by the orientalist Mikhail Evgenievich Masson in 1946. The expedition had several excavations or "Brigades", based on sites and periods, and were spread over many years. 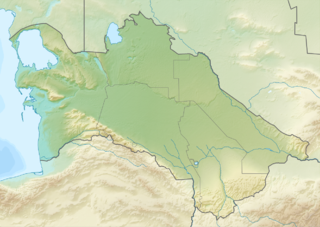 Jeitun (Djeitun) is an archaeological site of the Neolithic period in southern Turkmenistan, about 30 kilometers northwest of Ashgabat in the Kopet-Dag mountain range. The settlement was occupied from about 7200 to 4500 BC possibly with short interruptions. Jeitun has given its name to the whole Neolithic period in the foothills of the Kopet Dag.

Tarsus Museum is an archaeology and ethnography museum in Tarsus, Mersin Province, in southern Turkey.

Pampanga lies within the Central Plain region and has a total land area of 2,180.70 square kilometers. Together with Bulacan, Nueva Ecija, Pangasinan and Tarlac, the region includes a total area of approximately 5,900 square miles, mostly composed of lowlands and arable areas.

Philippine jade artifacts, made from white and green nephrite and dating as far back as 2000–1500 BC, have been discovered at a number of archeological excavations in the Philippines since the 1930s. The artifacts have been both tools like chisels, and ornaments such as lingling-o earrings, bracelets and beads.

Archaeology of Qatar as a field study began in 1956. Three major expeditions were carried out in Qatar throughout the mid-20th century, with the first being launched by a Danish team who began work in the 1950s. This was followed by British and French expeditions in 1970s and 1980s, respectively. Approximately 200 archaeological sites were discovered during these expeditions, with the most extensive being the coastal areas of Al Da'asa, Ras Abrouq and Al Khor Island. Artifacts such as flint tools, Ubaid and Barbar pottery and encampments were found in situ.

The Griffin Warrior Tomb is a Bronze Age shaft tomb dating to around 1450 BC, near the ancient city of Pylos in Greece. The grave was discovered by a research team sponsored by the University of Cincinnati and led by husband-and-wife archaeologists Jack L. Davis and Sharon Stocker. The tomb site was excavated from May to October 2015.