Xirivella (Valencian pronunciation:  [tʃiɾiˈveʎa] ) is a municipality in the Valencian Community, Spain. It borders the city of Valencia, Alaquàs, Picanya and Mislata. The municipality is divided by the V-30 motorway and the river Turia, with the La Luz district on the eastern part of the river. Since June 2012, a bridge across the motorway has connected both parts. [2] Local issues include noise pollution, caused by the nearby Valencia Airport [3]

It is connected to central Valencia by bus routes and a railway station. Metro links exist in the nearby town of Mislata. The proposed Line 14 of Metrovalencia is due to link the town to the rest of the metro network after 2030.

The name Xirivella may come from the Latin word Silvella (little forest).

Archeological remains have been found in Xirivella dating since Roman times.

During the Middle Ages the area was inhabited by farmers that cultivated the land. The silk industry also developed during this period.

Xirivella has town twinned with Casas de Benítez in Cuenca province (Spain), the Dunavarsány city of Hungary and the city of Habana Vieja in Cuba.

Xirivella has an interesting cultural heritage.

The old city maintains the urbanism from the Arabic era. This is a list of the main historical buildings:

- Virgen de la Salud Church (Església de la Verge de la Salut): The only parish until 1953. It was built at the end of the 17th century.

- Dau House: 14th century building. It was the place where taxes could be paid.

- Alquería del Castillo (Alqueria del Castell): It has also been demolished. It was located on the site of a Roman villa.

Xirivella has a very active cultural life. There are several cultural associations that include the wind orchestra (banda) called CIM Xirivella, the choir (Escola Coral Andarella), the International Clowns Festival (Mostra Internacional de Pallassos), the music school, the Culture House where are held concerts, shows, exhibitions, and a theater. Xirivella also organize the Xirivella Award, a recognition to honor its outstanding citizens.

The municipality had been governed by the Spanish Socialist Workers Party since the 1970s, either alone or with the support of United Left. However at the 2011 local elections, the People's Party won a majority of seats for the first time. [4]

Torrevieja is a seaside city and municipality located on the Costa Blanca in the province of Alicante, in the southern part of the Valencian Community, on the southeastern Mediterranean coast of Spain. 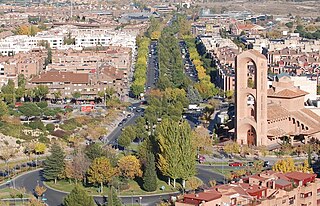 Pozuelo de Alarcón is a municipality in the Community of Madrid, Spain. Bordering the Moncloa-Aravaca district of Madrid proper to its west, Pozuelo de Alarcón is surrounded by large Mediterranean pine-tree forests: the Casa de Campo, the Monte del Pardo, and the Monte del Pilar. As of 2019, it ranks as the wealthiest municipality in Spain. La Finca, an isolated luxury residential area known by its affluent residents, most notably football players, lies within the municipality bounds.

Alboraya or Alboraia is a town and municipality of the province of Valencia, Spain. It is situated very close to the city of Valencia.

Torrent is a city located within the metropolitan area of the city of Valencia, Spain. It is the largest municipality of the Horta Oest comarca, with 83,962 inhabitants (2020). It is situated some 7 km from Valencia city proper, to which it is connected via the metro. The two metro stations in Torrent are called Torrent and Torrent Avinguda on lines 1, 2 and 7. 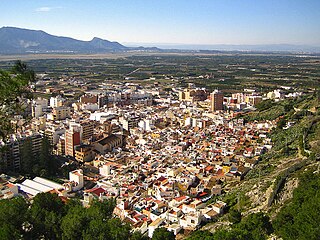 Cullera is a city and municipality of Spain located in the Valencian Community. It is part of the province of Valencia and the Ribera Baixa comarca. The city is situated near the discharge of the river Júcar in the Mediterranean Sea.

Mislata is a city in the Valencian Community, Spain. It has borders with the city of València and Quart de Poblet in the west and Xirivella in the south.

Metrovalencia is an urban rail system serving a large part of the metropolitan area of Valencia. The network is a modern amalgamation of former FEVE narrow gauge electric operated suburban railways. It is a large suburban network that crosses the city of Valencia, with all trains continuing out to the suburbs. It also has destinations on lines that make it more closely resemble commuter trains. The unique system combines light railway, metro and several tram operations north of the Túria riverbed park with line 4. Trains of lines 1, 3, 5 and 9 have automatic train operation (ATO) in 25.3 kilometers of underground system. Tram lines 4, 6, 8 and 10 are operated by modern trams.

La Pobla Llarga is a municipality in the comarca of Ribera Alta in the Valencian Community, Spain. Well known of the orange growth and its flourishing commerce in the 19th and 20th centuries. Currently, its inhabitants live basically on agriculture and the service sector. 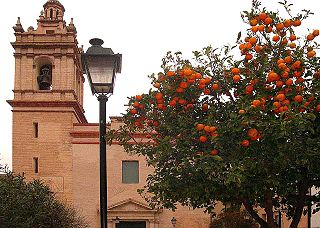 Quart de Poblet is a municipality in the comarca of Horta Oest in the Valencian Community, Spain. It has 25,499 inhabitants.

Valencian nationalism or Valencianism is a political movement in the Land of Valencia, Spain. 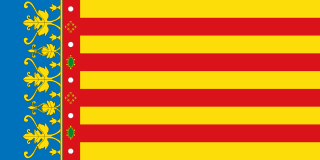 The Valencian Community, and also the Valencian Country or the Land of Valencia is an autonomous community of Spain. It is the fourth most populous Spanish autonomous community after Andalusia, Catalonia and Madrid with more than five million inhabitants. Its homonymous capital Valencia is the third largest city and metropolitan area in Spain. It is located along the Mediterranean coast on the east side of the Iberian Peninsula. It borders with Catalonia to the north, Aragon and Castilla–La Mancha to the west, and Murcia to the south, and the Balearic Islands are to its east. The Valencian Community consists of three provinces which are Castellón, Valencia and Alicante. 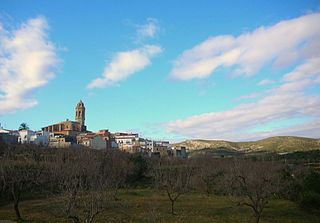 Traiguera is a town and municipality in the Baix Maestrat comarca, province of Castelló, Valencian Community, Spain. It is part of the Taula del Sénia free association of municipalities.

An alquería in Al-Andalus made reference to small rural communities that were located near cities (medinas). Since the 15th century it makes reference to a farmhouse, with an agricultural farm, found mainly in eastern and southeastern Spain, such as Granada and Valencia. Regarding the latter location Joan Fuster, in his book called El País Valenciano, makes extensive reference to the Valencian alquerías. Vestiges and documents referring to alquerias, known as alcarias in Portuguese, have been found in Portugal's southern region of Algarve. From Central Portugal to the Algarve passing through Alentejo region, a number of places in Portugal have the word Alcaria in its name. 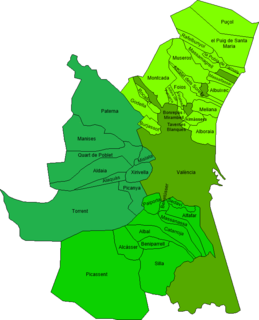 The history of Valencia, one of the oldest cities in Spain, begins over 2100 years ago with its founding as a Roman colony under the name "Valentia Edetanorum" on the site of a former Iberian town, by the river Turia in the province of Edetania. The Roman consul Decimus Junius Brutus Callaicus transferred about 2,000 veteran soldiers who had fought under him to Valentia in 138 BC. Valentia lay in a strategic location near the sea on a river island that would later be crossed by the Via Augusta. Pompey razed Valentia to the ground in 75 BC; it was rebuilt about fifty years later with large infrastructure projects, and by the mid-1st century, was experiencing rapid urban growth with many colonists from Italy.

Pere Maria Orts i Bosch was a Valencian writer, historian, researcher, heraldist and art collector. He was a member of the Acadèmia Valenciana de la Llengua and was awarded the High Distinction of the Generalitat Valenciana in 2006.