Xuanwumen (simplified Chinese :宣武门; traditional Chinese :宣武門; pinyin :Xuānwǔmén; Manchu:ᡥᠣᡵᠣᠨ
ᠪᡝ
ᠠᠯᡤᡳᠮᠪᡠᡵᡝ
ᡩᡠᡴᠠ;Möllendorff:horon be algimbure duka [1] ;lit.the gate of military might}});Möllendorff:tob dergi duka; lit. "Gate of the declaration of power"), was a gate in Beijing's former city wall. In the 1960s, the gate was torn down during the construction of the city's subway. Today, Xuanwumen is a transport node in Beijing as well as the location of Xuanwumen Station on Line 2 and Line 4 of the Beijing Subway. [2]

Deshengmen is a city gate that was once part of Beijing's northern city wall. It is one of Beijing's few preserved city gates and now stands as a landmark on the northern 2nd Ring Road. 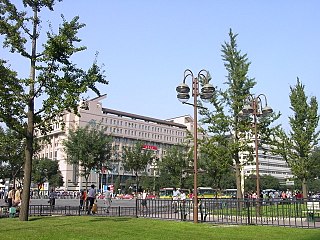 Xicheng District is a district of Beijing. Xicheng District spans 32 square kilometres (12 sq mi), covering the western half of the old city, and has 706,691 inhabitants. Its postal code is 100032. Xicheng is subdivided into 15 subdistricts of the city proper of Beijing. The former Xuanwu District was merged into Xicheng in July 2010.

Dongzhimen was a gate in the old Beijing city fortifications. It is now a vibrant commercial center and transportation node in Beijing. 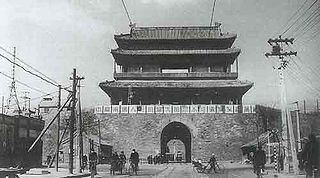 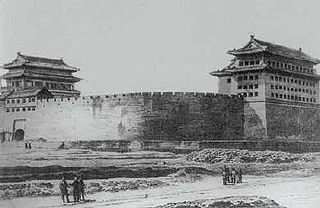 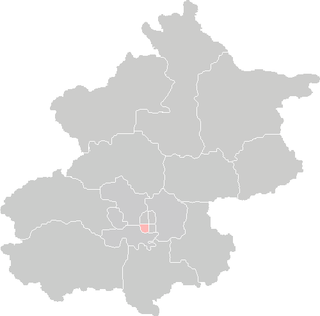 Xuanwu District was a district of the Municipality of Beijing. It was located southwest to the city center, outside of Xuanwu Gate. The district was merged into Xicheng District in July 2010. 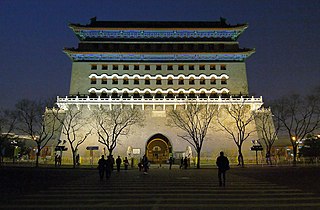 Qianmen is the colloquial name for Zhengyangmen, a gate in Beijing's historic city wall. The gate is situated to the south of Tiananmen Square and once guarded the southern entry into the Inner City. Although much of Beijing's city walls were demolished, Zhengyangmen remains an important geographical marker of the city. The city's central north–south axis passes through Zhengyangmen's main gate. It was formerly named Lizhengmen, meaning "beautiful portal".

Chongwenmen was a gate that was part of Beijing's city wall in what is now Dongcheng District. The gate stood in the southeastern part of Beijing's inner city, immediately south of the old Beijing Legation Quarter. In the 1960s, the gate and much of the wall was torn down to make room for Beijing's second ring road. Today, Chongwenmen is marked by the intersection of Chongwenmen Nei (Inner) and Chongwenmen Wai (Outer) Street, which run north-south through the former gate, Chongwenmen East and Chongwenmen West Street, which run east-west where the wall stood, and Beijing Station West Street, a diagonal street, going northwest to the Beijing railway station. Chongwenmen is a transport node in Beijing. Chongwenmen Station is an interchange station on Lines 2 and 5 of the Beijing Subway. Chongwen District, an administrative division of the city from 1952 to 2010 and now folded into Dongcheng District, was named after Chongwenmen.

The Cathedral of the Immaculate Conception, colloquially known as the Xuanwumen church or Nantang to the locals, is a historic Roman Catholic Church located in the Beijing, China, Xicheng District, near the Beijing Financial Street. While the original foundation of the cathedral was in 1605, making it the oldest Catholic church in Beijing, the current building in Baroque style dates from 1904. The present Archbishop Joseph Li Shan, installed in September 2007, is one of the few Catholic bishops also recognized by the Chinese Patriotic Catholic Church.

Fuxing Men Station is an interchange station on Line 1 and Line 2 of the Beijing Subway. It is named for Fuxingmen, a former gate in Beijing's city wall. The station handles over 170,000 transfers between Lines 1 and 2 per day.

Xuanwu Men Station is an interchange station between Line 2 and Line 4 of the Beijing Subway. It is named for Xuanwumen, a former gate in Beijing's city wall that was demolished during construction of the subway. The station opened in 1971 and handles an average of 350,000 passengers per day in 2012. Interchange volumes can reach per hour can reach 15,000 passengers per hour in the morning peak. The large transfer volumes overwhelm the small interchange corridors, which can narrow to only 2.4 meters in width. Three new transfer corridors were added in 2020, increasing transfer capacity of the station six-fold to around 55,000 passengers per hour.

Chaoyang Men Station is an interchange station on Line 2 and Line 6 of the Beijing Subway named for Chaoyangmen, an old gate in Beijing's city wall.

Xuanwumen or Xuanwu Gate may refer to: 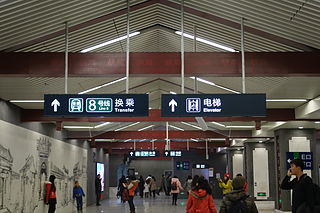 Nanluogu Xiang is a station on Line 6 and Line 8 of the Beijing Subway in central Beijing. The station opened on December 30, 2012 to Line 6 service, and to Line 8 service in December 2013. It is located near to the south entrance of the Nanluoguxiang alley, after which it is named. It will also become a transfer station for the Planned Phase 2 of Line 3 in the future.

Xuanwumen Station may refer to:

Xuanwumen station is a station of Line 1 of the Nanjing Metro. It started operations on 3 September 2005 as part of the line's Phase I from Maigaoqiao to Andemen. 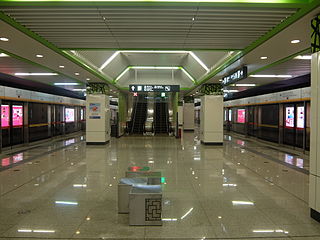 Huagong Station is a station on Line 7 of the Beijing Subway. It was opened on December 28, 2014 as a part of the stretch between Beijing West railway station and Jiaohua Chang and is located between Baiziwan and Nanlouzi Zhuang.