Huaiyi (懷義; died December 25, 694 [1] ), né Feng Xiaobao (馮小寶), also referred to as Xue Huaiyi (薛懷義), was a Buddhist monk who was known for being the lover of Wu Zetian, the only female emperor in the history of China.

Huaiyi, whose birth name was Feng Xiaobao, was from Hu County (鄠縣, in modern Xi'an, Shaanxi). He was making a living by selling medicines on the streets of Tang Dynasty's eastern capital Luoyang, when he was spotted by Princess Qianjin, a daughter of Tang's founder Emperor Gaozu, and in or before 685, she recommended him to Empress Dowager Wu (later known as Wu Zetian), then regent over her son Emperor Ruizong. Empress Dowager Wu favored him greatly, and in order to facilitate his being able to come in and out of the palace, had him undertake tonsure to become a Buddhist monk with the name Huaiyi. Because Huaiyi came from a lowly household, in order to elevate his status, Empress Dowager Wu had him adopted into the clan of her son-in-law Xue Shao (薛紹) (the husband of her daughter Princess Taiping) and had Xue Shao treat Huaiyi as an uncle. [2]

It was said that when Huaiyi entered and exited the palace, he would ride on an imperial steed and have some 10 eunuchs attend to him. Whenever people saw him, they avoided him—because he was accustomed to batter those who came near him and toss them aside. He was particularly hateful of Taoist monks, and whenever he encountered them, he would batter them severely, sometimes cutting their hair off. Even the most honored governmental officials, including Empress Dowager Wu's powerful nephews Wu Chengsi and Wu Sansi prostrated themselves before him. He gathered a group of young thugs and had them also undertake tonsure but serve as his followers. When these followers carried out unlawful deeds, few officials dared to speak about this. One exception was the assistant censor Feng Sixu (馮思勗), who punished them according to their deeds, and on one occasion, when Huaiyi encountered Feng Sixu on the road, he had Feng Sixu battered so severely that Feng Sixu nearly died. In or around 686, however, there was an incident when Huaiyi encountered the chancellor Su Liangsi. Huaiyi did not greet Su and displayed himself arrogantly. In anger, Su ordered his guards to seize Huaiyi and slap him. When Huaiyi complained to Empress Dowager Wu, she responded semi-jocularly, "Your Eminence should enter through the North Gate [(i.e., directly into the palace without going through the governmental buildings to the south of the palace)]. The Southern Palace is where chancellors gather; do not violate it."

In 688, Empress Dowager Wu tore down Qianyuan Hall (乾元殿), and commissioned the construction of the imperial meeting hall (明堂, MIng Tang) over the same location. She commissioned Huaiyi to oversee the project and conscripted several tens of thousands of men to serve as construction workers. After the imperial meeting hall was completed later that year, for his contributions, she gave him a general title and created him the Duke of Liang.

In 689, Empress Dowager Wu commissioned Huaiyi to serve as the commander of an army against Eastern Tujue. He advanced to Zi River (紫河, a tributary of the Yellow River) but did not encounter Eastern Tujue forces. He erected a monument at Chanyu Tower (單于臺, in modern Hohhot, Inner Mongolia) before withdrawing.

In 690, Empress Dowager Wu changed Huaiyi's title to Duke of E. Later that year, she took the throne from Emperor Ruizong, establishing a new Zhou Dynasty with herself as "emperor."

In late 694, Wu Zetian held a grand Buddhist gathering at the imperial meeting hall, and she commissioned a giant painting of Buddha drawn with cattle blood, but claimed that it was miraculous drawn with just the blood from Huaiyi's knee, and she hung the portrait at one of the bridges entering Luoyang, Tianjin Bridge (天津橋). However, at that time, she had another lover, the imperial physician Shen Nanqiu (沈南璆), and this drew jealousy from Huaiyi. Huaiyi secretly set fire to the Heavenly Hall (天堂), north of the imperial meeting hall, and the fire burned both halls to the ground. However, when Wu Zetian subsequently ordered the reconstruction of both halls, she still put Huaiyi in charge of the construction.

After this incident, however, Huaiyi grew increasingly arrogant and unreasonable, and Wu Zetian began to despise him. To guard herself, she selected a group of strong ladies in waiting. She then had Wu Youning the Prince of Jianchang (the grandson of her uncle Wu Shirang (武士讓)) lead a group of strong soldiers to set an ambush at Yaoguang Hall (瑤光殿), and when Huaiyi went to Yaoguang Hall, Wu Youning and his soldiers overpowered him and battered him to death. [3] Huaiyi's body was taken to White Horse Temple and cremated, and then mixed into mud that was set to be used to construct a pagoda.

A portrait of Huaiyi as supervillain appears in the quasi-historical novel Deception (also titled Iron Empress), by Eleanor Cooney and Daniel Altieri. 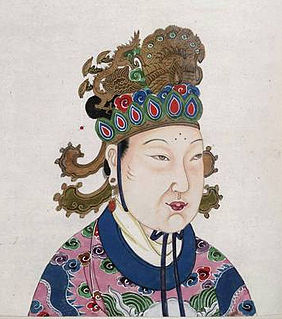 Wu Zhao, commonly known as Wu Zetian, alternatively Wu Hou, and during the later Tang dynasty as Tian Hou, was the de facto ruler of China, first through her husband the Emperor Gaozong and then through her sons the Emperors Zhongzong and Ruizong, from 665 to 690. She subsequently became empress regnant of the Zhou dynasty (周) of China, ruling from 690 to 705. She is notable for being the only female monarch in the history of China.

Li Jiao, courtesy name Jushan (巨山), formally the Duke of Zhao (趙公), was an official of the Chinese Tang Dynasty and Wu Zetian's Zhou Dynasty, serving as chancellor during the reigns of Wu Zetian, her sons Emperor Zhongzong and Emperor Ruizong, and her grandson Emperor Shang. 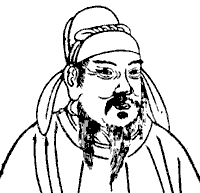 Emperor Zhongzong of Tang, personal name Li Xian, and at other times Li Zhe or Wu Xian, was the fourth Emperor of the Tang dynasty of China, ruling briefly in 684 and again from 705 to 710. During the first period, he did not rule, and the entire government was in the hands of his mother, Empress Wu Zetian and was effectively overthrown by her imperial power after opposing his mother. In the second reign period, most of the government was in the hands of his beloved wife Empress Wei.

Princess Taiping was a royal princess during the Tang dynasty and her mother Wu Zetian's Zhou dynasty. She was the youngest daughter of Wu Zetian and Emperor Gaozong and was powerful during the reigns of her mother and her elder brothers Emperor Zhongzong and Emperor Ruizong, particularly during Emperor Ruizong's second reign, when for three years until her death, she was the real power behind the throne.

Di Renjie, courtesy name Huaiying (懷英), formally Duke Wenhui of Liang (梁文惠公), was an official of Tang and Zhou dynasties, twice serving as chancellor during the reign of Wu Zetian. He was one of the most celebrated officials of Wu Zetian's reign. 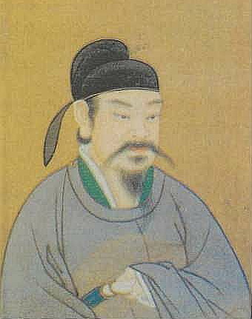 Emperor Ruizong of Tang, personal name Li Dan, also known at times during his life as Li Xulun, Li Lun, Wu Lun, and Wu Dan, was the fifth and ninth emperor of Tang Dynasty. He was the eighth son of Emperor Gaozong and the fourth son of Emperor Gaozong's second wife Empress Wu. He was wholly a figurehead during his first reign when he was controlled by his mother, and he was the titular and puppet ruler of the Tang Empire from 684 to 690. During his second reign after his mother's death, significant power was exercised by his sister Princess Taiping.

Wang Benli (王本立) was an official of China's Tang Dynasty, serving as chancellor during the first reign of Emperor Ruizong.

Zhang Jianzhi (張柬之) (625-706), courtesy name Mengjiang (孟將), formally Prince Wenzhen of Hanyang (漢陽文貞王), was an official of the Chinese dynasty Tang Dynasty and Wu Zetian's Zhou Dynasty, serving as chancellor during the reigns of Wu Zetian and her son Emperor Zhongzong. He was a key figure in the coup that overthrew Wu Zetian and restored Emperor Zhongzong in 705, but was later exiled due to false accusations instigated by Wu Zetian's nephew Wu Sansi and died in exile.

Li Chengqi, known as Wu Chengqi during the reign of his grandmother Wu Zetian and as Li Xian after 716, formally Emperor Rang, was an imperial prince of the Chinese dynasty Tang Dynasty who served as crown prince during the first reign of his father Emperor Ruizong who yielded that position to his younger brother Li Longji during Emperor Ruizong's second reign. Li Chengqi had a number of children, including his oldest son, Li Jin, the prince of Ruyang, who was called one of the Eight Immortals of the Wine Cup by famous poet Du Fu.

Lai Junchen was a secret police official during the Chinese dynasty Tang Dynasty and Wu Zetian's Zhou Dynasty, whose ability to interrogate and falsely implicate officials of crimes made him a subject of fear and hatred. In 697, he was accused of plotting to falsely accuse Wu Zetian's sons and other family members of treason, and he was executed.

Li Zhaode (李昭德) was an official of Wu Zetian's Zhou Dynasty and at one point served as chancellor. He was known for his abilities and strong will, which eventually led to a conflict with Wu Zetian's secret police official Lai Junchen. He was executed on the same day as Lai, who was in turn accused by others of treason.

Tang Xiujing, formal name Tang Xuan (唐璿) but went by the courtesy name of Xiujing, formally Duke Zhong of Song (宋忠公), was an official and general of the Chinese dynasty Tang Dynasty and Wu Zetian's Zhou Dynasty, serving as chancellor during the reigns of Wu Zetian, her sons Emperor Zhongzong and Emperor Ruizong and her grandson Emperor Shang.

Li Duozuo, formally the Prince of Liaoyang (遼陽王), was an ethnically Mohe general of the Chinese dynasty Tang Dynasty and Wu Zetian's Zhou Dynasty. He is mostly known for his participation in the successful coup of 705 that overthrew Wu Zetian and returned her son Emperor Zhongzong to the throne, and the failed coup of 707 in which Emperor Zhongzong's son Li Chongjun tried to overthrow Emperor Zhongzong's wife Empress Wei.

Zhang Renyuan (張仁愿), né Zhang Rendan (張仁亶), formally the Duke of Han (韓公), was an official and general of the Chinese dynasty Tang Dynasty and Wu Zetian's Zhou Dynasty, serving as a chancellor during the reigns of Wu Zetian's sons Emperor Zhongzong and Emperor Ruizong and grandson Emperor Shang.

Zhong Shaojing (鍾紹京), courtesy name Keda (可大), was an official of the Tang Dynasty and Wu Zetian's Zhou Dynasty, briefly serving as a chancellor during the reign of Emperor Ruizong.

Xue Ji, courtesy name Sitong (嗣通), was an official of the Chinese Tang dynasty, briefly serving as chancellor during the reign of Emperor Ruizong. He was considered one of the four greatest calligraphers of early Tang, along with Yu Shinan, Ouyang Xun, and Chu Suiliang.