Xue Juzheng (c. 912 – 12 July 981, courtesy name Ziping) was a scholar-official who successively served the Later Jin, Later Han, Later Zhou and Song dynasties. He was one of the chief ministers of the Song dynasty from 973 until his death.

Xue is best known today for being the lead author of the monumental history book Old History of the Five Dynasties (974).

During the Five Dynasties

After the Later Jin destroyed the Later Tang in 937, Xue served on the staff of Liu Suining (劉遂凝), the military governor of Hua Prefecture. In 941, he was recommended by Liu Suining's older cousin Liu Suiqing (劉遂清) and became a patrolling inspector for the Salt Monopoly. In 944, he served as a judge in the Bureau of General Accounts. When Li Song became the director for the Salt Monopoly, Xue served on his staff. Xue also received a position in the Court of Judicial Review, and subsequently he was made a reminder official in the Secretariat. In 946, when Sang Weihan was made the prefect of Kaifeng, Xue joined him as an administrative assistant. [2]

During the Later Han, Xue once saved a commoner from execution. The man was accused of violating salt laws, but Xue found the evidence unconvincing. After further questioning he discovered bad blood between the defendant and the accuser, a minor government functionary who eventually admitted to making false accusations. [2]

After Later Zhou's founding in 951, Xue was made vice director of the Bureau of Review, also in charge of all judges in the State Finance Commission.

During the Song dynasty

When the Song Dynasty replaced the Later Zhou in 960, Xue took service with the new dynasty as he had with dynasties prior to the new rulers of northern China. During the first two decades of the Song, Xue set about to compiling a history of the Five Dynasties.

Entitled Five Dynasties History, the main purpose of the work was to reinforce the claim of the Song to the Mandate of Heaven from the Tang Dynasty through the Five Dynasties to the reigning Song.

Xue did not live much longer than after compilation of the Five Dynasties History in 974, dying in 981. However, his legacy of writing a history of a previous era of Chinese history for the purpose of bolstering the current patron dynasty would be repeated later in Chinese history, notably with the Yuan Dynasty’s writing of the History of Liao . 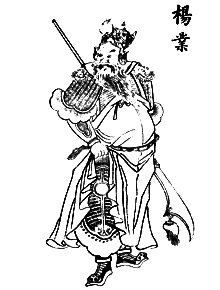 Yang Ye (楊業) or Yang Jiye (楊繼業), named Liu Jiye (劉繼業) before 979 and Yang Chonggui (楊重貴) in his youth, was a military general in imperial China, serving first the Northern Han state during the last years of the Five Dynasties and Ten Kingdoms period, and later the Song Dynasty which annexed Northern Han in 979.

Chai Rong or Guo Rong (郭榮), also known by his temple name Shizong (世宗), was the second emperor of imperial China's short-lived Later Zhou during the Five Dynasties and Ten Kingdoms period, reigning from 954 until his death. He succeeded his uncle-in-law Guo Wei, whose surname he had adopted.

Guo Zongxun (郭宗訓), also known by his posthumous name Gongdi, was the third and last emperor of ancient China's short-lived Later Zhou during the Five Dynasties and Ten Kingdoms period. He reigned from July 959, when he succeeded his father Chai Rong, until February 960, when he was overthrown by general Zhao Kuangyin, who founded the Song Dynasty.

Pan Mei (潘美) was a military general and statesman in the early years of imperial China's Song Dynasty. In the 970s, he was the main commander in Song's conquest of Southern Han and also played pivotal roles in the conquest of Southern Tang and Northern Han. Afterwards he fought the Khitan-ruled Liao Dynasty on Song's northern border.

Gao Huaide (高懷德) courtesy name Cangyong was a general in ancient China, first in the Later Zhou military and later in the Northern Song military.

Fàn Zhi, formally the Duke of Lu (魯國公), was a civil official who served under 12 emperors of 6 dynasties during imperial China's Five Dynasties and Ten Kingdoms period and the subsequent Song Dynasty. He was the Later Zhou chancellor from 951 until 960, and the Song Dynasty chancellor from 960 until 964, not long before his death. A strict adherent to legal guidelines, he had influenced Later Zhou and Song rulers to rely more on civil administration in an age dominated by the military. Fàn was a member of the elite Fàn family.

Empress Fu, posthumously Empress Xuanyi (宣懿皇后) was an empress consort of imperial China's short-lived Later Zhou during the Five Dynasties and Ten Kingdoms period. She was invested the empress in 954 when her husband Guo Rong became the second Later Zhou emperor. Three years after her death, Guo Rong married her younger sister when he fell critically ill.

Wang Jun (王峻) was one of the first chancellors of imperial China's short-lived Later Zhou during the Five Dynasties and Ten Kingdoms period. He started his career as a singer for those in power, and rose to high prominence due to his association first with military general Liu Zhiyuan, founder of the Later Han, and later Guo Wei, who founded Later Zhou. After becoming the Later Zhou chancellor, his excessive actions gradually created a lot of distrust in Guo, culminating in his precipitous political downfall right before his death.

Liu Min (劉旻), named Liu Chong (劉崇) before 951, also known by his temple name Shizu (世祖), was the founding emperor of imperial China's Northern Han state during the Five Dynasties and Ten Kingdoms period. He was an ethnic Shatuo and the younger brother of Later Han's founder Liu Zhiyuan.

Liu Xu (888–947), courtesy name Yaoyuan (耀遠), formally the Duke of Qiao (譙公), was an official of the Chinese Five Dynasties and Ten Kingdoms Period states Later Tang and Later Jin, serving as a chancellor during both of those short-lived dynasties. He was the lead editor of the Old Book of Tang, one of the official histories of the preceding Tang Dynasty, completed during Later Jin, although most of the work was probably completed during the term of his predecessor Zhao Ying.

Zhou Huaizheng was a powerful Song dynasty palace eunuch during Emperor Zhenzong's reign. After Emperor Zhenzong's illness in 1019 made him incapable of ruling, state power gradually fell to the hands of his wife Empress Liu and chancellor Ding Wei. Zhou plotted to assassinate Ding so that Kou Zhun could return to chancellorship, but his coup failed. He was arrested by Lei Yungong and executed.

Wen Yanbo, courtesy name Kuanfu, was a scholar-official of the Song dynasty who served four emperors over more than five decades. He was a grand councilor during Emperor Renzong's reign.

Shen Lun, known as Shen Yilun before 976, was a scholar-official who successively served the Later Han, Later Zhou and Song dynasties. He was one of the Song dynasty grand councilors between 973 and 982.

Lu Zhen (c.957–1014), courtesy name Zifa, was a Song dynasty scholar-official, historian, poet and diplomat. He was famous for his writings, including Jiu Guo Zhi, a history book on the Five Dynasties period.

Empress Fu was an empress consort and empress dowager during the Later Zhou dynasty. She was a daughter of general Fu Yanqing and a younger sister of Empress Xuanyi, who was married to the Later Zhou emperor Guo Rong from 951 or so to 956. Guo Rong had been without a wife ever since Empress Xuanyi's death in 956, and he married the younger Fu in July 959 when he fell critically ill. The marriage was clearly political and most likely not consummated: Guo Rong died 10 days later and was succeeded by his 6-year-old son Guo Zongxun. Empress Dowager Fu as his guardian became the regent.