Last updated April 09, 2021
European style of painting by Japanese artists
This article is about the Japanese painting style. For the place in Tokyo, see Yōga, Tokyo. For the Hindu philosophy, see yoga.

Yōga (洋画, literally "Western-style painting") is a style of artistic painting in Japan, typically of Japanese subjects, themes, or landscapes, but using Western (European) artistic conventions, techniques, and materials. The term was coined in the Meiji period (1868–1912) to distinguish Western-influenced artwork from indigenous, or more traditional Japanese paintings, or Nihonga (日本画).

European painting was introduced to Japan during the late Muromachi period along with Christian missionaries from Portugal in 1543. [1] Early religious works by Japanese artists in imitation of works brought by the missionaries can be considered some of the earliest forms of Yōga. However, the policy of national seclusion introduced by the Tokugawa bakufu in the Edo period effectively ended the influence of western art on Japanese painting, with the exception of the use of perspective, which was discovered by Japanese artists in sketches found in European medical and scientific texts imported from the Dutch via Nagasaki. Some Japanese artists incorporated the technique, such as Utagawa Toyoharu in Perspective Pictures of Places in Japan (c. 1772-1781). [2] During the first half of the nineteenth century, some painting works showed influences of Western Art such as prints of Katsushika Hokusai. (c.1760–1849). [3]

Rising during the Meiji Period

In 1855, the Tokugawa bakufu established the Bansho Shirabesho (Institute for the Study of Barbarian Documents), a translation and research institute for western studies, including a section to investigate western art. [4] This section was headed by Kawakami Tōgai, [1] whose assistant Takahashi Yuichi was a student of English artist Charles Wirgman. In 1968, Togai started a private art school and published A Guide to Western Style Painting (1871). [1] Takahashi is regarded by many as the first true Yōga painter. [1] Yuichi believed that Western style could help to build a Japanese national identity. [1]

In 1876, the Kobu Bijutsu Gakkō (Technical Art School) was established by the Meiji government as Japan's first dedicated Yōga art school. [4] Foreign advisors, such as the Italian artists Antonio Fontanesi, Vicenzo Ragusa and Giovanni Cappelletti were hired by the government to teach Japanese artists, [4] such as Asai Chū in the latest western techniques.

French artist Raphael Collin also taught the Western-style to Japanese artists such as Kuroda Seiki, Fuji Masazo, and Asai Chū. Despite that Impressionism was emerging, Collin was more interested in Neoclassical Academic painting and Naturalism of the Barbizon school. [1]

In the 1880s, the general reaction against Westernization and the growth in popularity and strength of the Nihonga movement caused the temporary decline of Yōga. The Kobu Bijutsu Gakkō was forced to close in 1883, and when the Tokyo Bijutsu Gakkō (the forerunner of the Tokyo National University of Fine Arts and Music) was established in 1887, only Nihonga subjects were taught.

However, in 1889, the Meiji Bijutsukai (Meiji Fine Arts Society) was established by Yōga artists, and in 1893, the return of Kuroda Seiki from his studies in Europe gave fresh impetus to the Yōga genre, with the establishment of the Hakuba-kai (White Horse Society). From 1896, a Yōga department was added to the curriculum of the Tokyo Bijutsu Gakkō, and from that point onwards, Yōga has been an accepted component of Japanese painting.

Since that time, Yōga and Nihonga have been the two main divisions of modern Japanese painting. This division is reflected in education, the mounting of exhibitions, and the identification of artists. However, in many cases Nihonga artists also adopted realistic Western painting techniques, such as perspective and shading. Because of this tendency to synthesize, although Nihonga forms a distinct category within the Japanese annual Nitten exhibitions, in recent years, it has become increasingly difficult to draw a distinct separation in either techniques or materials between Nihonga and Yōga.

During the Pacific War, Yōga’s oil painters used the Western style for highlighting the Japanese War effort. In the post-war, Yōga was perceived as a conservative style linked to the Japanese establishment of the prewar.

Yōga has been defined by using the medium and format of the European tradition, such as oils on canvas, watercolors, pastels, and pencil on paper. However, Yōga artists were criticized abroad for lack of authenticity and originality. As an answer to these critics, between the 1920s and 1930s, Yōga painters adopted materials associated with Nihonga and premodern painting traditions for Western topics. Reclining Nude with Toile de Jouy by Foujita Tsuguharu (1886–1968) was an example of this trend. Tsuguharu combined oils with materials proper to Nihonga for the nude. [3]

Viscount Kuroda Seiki was a Japanese painter and teacher, noted for bringing Western theories about art to a wide Japanese audience. He was among the leaders of the yōga movement in late 19th and early 20th-century Japanese painting. His real name was Kuroda Kiyoteru, which uses an alternate pronunciation of the Chinese characters.

Antonio Fontanesi was an Italian painter who lived in Meiji period Japan between 1876 and 1878. He introduced European oil painting techniques to Japan, and exerted a significant role in the development of modern Japanese yōga painting. He is known for his works in the romantic style of the French Barbizon school. 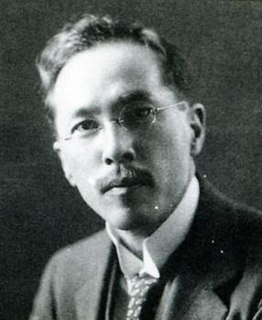 Ikuma Arishima was the pen-name of Arishima Mibuma, a Japanese novelist and painter active in the Taishō and Shōwa period. He also used Utosei and then Jugatsutei as alternative pen names. 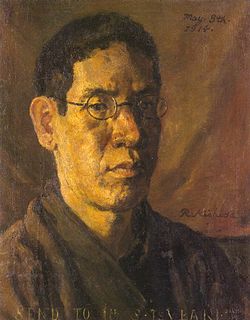 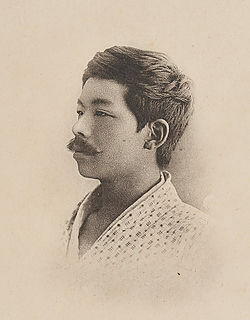 Shigeru Aoki was a Japanese painter, noted for his work in combining Japanese legends and religious subjects with the yōga (Western-style) art movement in late 19th- and early 20th-century Japanese painting. 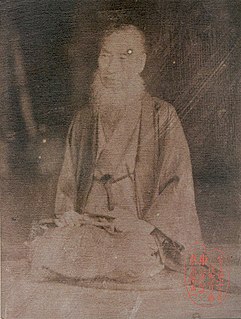 Takahashi Yuichi was a Japanese painter, noted for his pioneering work in developing the yōga (Western-style) art movement in late 19th-century Japanese painting. 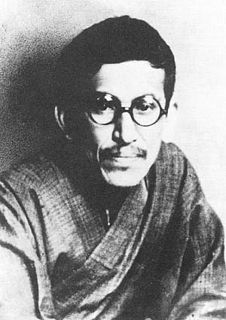 Tetsugorō Yorozu was a Japanese painter, noted for his work in introducing the Avant-garde trend, especially cubism into Japanese yōga (Western-style) painting in the early 20th century.

Mavo was a radical Japanese art movement of the 1920s. Founded in 1923, they were productive during the late Taishō period (1912–26). Mavo re-instituted the Japanese Association of Futurist Artists, the anarchistic artist group who displayed an outdoor exhibit in Ueno Park in Tokyo in protest of conservatism in the Japanese art world. 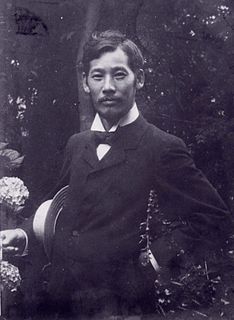 Okada Saburōsuke was a Japanese painter in the Yōga style and a Professor at the "Tōkyō Bijutsu Gakkō" ; precursor of the Tokyo University of the Arts. 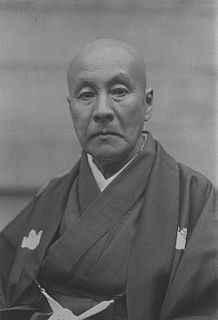