Yūsaku Matsuda (松田 優作, Matsuda Yūsaku, September 21, 1949 – November 6, 1989) was a Japanese actor. In Japan he was best known for roles in action films and a variety of television series in the 1970s as well as a switch to a wider range of roles in the 1980s. His final film appearance was as the villain Sato in Ridley Scott's Black Rain .

He is considered one of Japan's most important film actors. [1]

He began acting after graduating from high school, moving through several theatre companies before joining the Bungakuza theatre group at around the same time as Kaori Momoi. His career as a screen actor started in 1973 with a role as a junior police officer in a TV detective drama called Taiyō ni Hoero! He went on to appear in various television series and action films during the seventies. His most remembered role on television was in Tantei Monogatari , in which he starred as an unlikely private detective. [2] In films, he was known for such gun-toting roles as assassin Shōhei Narumi in the Yūgi (Game) series of films, and master criminal Asakura in Resurrection of the Golden Wolf.

In the 1980s, desiring to be seen as more than an action star, he moved from action films to a wider range of dramatic roles. [2] He made a dramatic weight loss to appear in the film The Beast to Die in 1980. The following year he appeared in another action film, Yokohama BJ Blues , which also featured his singing, and the surreal art film Kagerō-za . In 1983, he won the award for best actor at the 8th Hochi Film Award for Detective Story and The Family Game . [3] In 1985 he took the lead role in the award-winning Sorekara . In 1986, he directed A Homansu , after the scheduled director left due to disagreements. This was the only film he directed. During the eighties, he also appeared in many commercials, such as for Gatsby hair products or Triangle shochu. In addition to acting, from the late seventies to the eighties he toured as a singer, releasing several albums of music. [4]

In 1989, although already diagnosed with cancer, he starred as the villain, Sato, in Black Rain . Director Ridley Scott and co-stars Michael Douglas, Andy Garcia, and Kate Capshaw praised his professionalism and performance, despite his suffering. He died shortly afterwards, after making a final appearance in a special television drama with Florence Griffith-Joyner, in which he was supposed to run against her, but was unable to do so because of his illness. [5]

After his death, his image continued to be used in commercials, such as a 2000 campaign for Schick razors using his image from the Tantei Monogatari television series. Books, films, television specials, and other products, such as scale models of his most famous characters, [6] continue to appear long after his death. In 1998, a film called Yomigaeru Yūsaku: Tantei Monogatari Tokubetsu-hen was released, containing two episodes of the Tantei Monogatari television series and some additional material. In 2009, his second wife, Miyuki Matsuda, produced a tribute film, Soul Red, including clips from his films and interviews with actors such as Andy Garcia, as well as his two sons.

Matsuda was born out of wedlock in Shimonoseki, to a Japanese father, a probation officer, whom he never met, and a Zainichi Korean mother, Kaneko Matsuda, originally Kim. [4] She was a Korean who had married a Japanese man who died during World War II. Kaneko wrote his birth year incorrectly as 1950 on his birth records deliberately. [4]

He grew up and was educated in Shimonoseki, attending Kanda elementary school and Bunyo Junior High School, before entering Shimonoseki Secondary School. In 1967, while at high school, at the urging of his mother, he stayed with his aunt in the city of Seaside in America for one year. He attended Seaside High School. However, extremely unhappy in America, malnourished, unable to speak English, and feeling himself the victim of discrimination, he returned to Japan. Because he was afraid of facing his mother, he went to stay with his older brother in Tokyo. [4] He attended Hōnan High School (豊南高等学校) as a night student and graduated in 1969. After graduating, he entered a theatre company called "Rokugatsu Gekijō" (六月劇場), leaving in November 1969. In 1971 he joined a theatre group "Club Marui", then in 1972 he joined "Bungakuza". He met his future wife Michiko through Club Marui in May 1971. At the time he was working as a barman. [7]

He changed his citizenship from Korean to Japanese while he was starring in Taiyō ni Hoero! , with the help of Michiko, whose father was a member of the Liberal Democratic party who was head of the then-Prime Minister's support office. [4]

In 1975 he was involved in two fracas, first with two journalists, and then with a student who attacked him with a wooden kendo sword because the student thought he was assaulting a woman. The student ended up in a hospital, and Matsuda received a suspended sentence for assault. This caused a major disruption in his career, with film studios and television companies dropping him. [4]

He married Michiko Kumamoto in 1975 and had one daughter. They divorced in 1981 after six years of marriage. In 1983, he married Miyuki Kumagai, with whom he had started a relationship in 1979, when she was 17, when she appeared in the television series Tantei Monogatari. [4] They had three children. Two of the children, Ryuhei and Shota, became actors and daughter Yuki became a singer.

In 1988, Matsuda was diagnosed with bladder cancer, before shooting began for Black Rain. Matsuda refused chemotherapy, as he thought it would affect his ability to act in the film. [4] After his death, his first wife, who had experienced him ignoring an ear infection until it required surgery to prevent deafness, wrote that she suspected that he did not actually realize the seriousness of his illness. [4] During the filming, he was urinating blood. By the time shooting finished, in March 1989, his cancer had spread to his spine and lungs, making it inoperable. On October 7, 1989, Matsuda was hospitalized. A month after he was admitted, Matsuda died at 6:45 PM JST on November 6 at the age of 40, at a Tokyo hospital. He was buried in Nishitama cemetery (西多摩霊園) in Akiruno, Tokyo. [8] [ unreliable source? ]

Matsuda is a Japanese surname. Notable people with the surname include:

Kenshiro is a fictional character and the protagonist of the Fist of the North Star manga series created by Tetsuo Hara and Buronson. According to Hara and Buronson, Kenshiro's character design was primarily based on the martial artist and actor Bruce Lee, combined with influences from actor Yūsaku Matsuda and the Mad Max film series.

Raoh is a fictional character in the Fist of the North Star manga franchise by Buronson and Tetsuo Hara. He is the eldest of four honorary brothers who trained in the ancient assassination art of Hokuto Shinken. Following his introduction in Chapter 42 of the original manga, Raoh serves as Kenshiro's primary rival and adversary during a great portion of the series, being in the case, the main antagonist of Fist of the North Star, having already taken the mantle of Ken-oh, a tyrannical warlord that seeks to dominate the post-apocalyptic world. In contrast to Kenshiro's title as the "Savior of Century's End", Raoh is commonly referred as the Supreme Ruler of the Century's End within the story.

Shin Kishida was a Japanese television, film, and stage actor. He was also a voice actor.

Ryosuke Yamada is a Japanese singer and actor. He is a member of Hey! Say! JUMP.

Janet Hatta is an actress.

Gō Wakabayashi is a Japanese film and television actor from Nagasaki.

Miyuki Matsuda is a Japanese actress, the widow of Yūsaku Matsuda, and the sister of Mami Kumagai.

Detective Story is a 1983 Japanese film directed by Kichitaro Negishi. 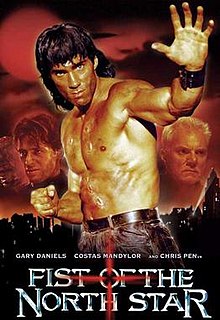 Fist of the North Star is a 1995 American straight-to-video live-action martial arts film based on the Japanese manga of the same name by Buronson and Tetsuo Hara. The film was directed by Tony Randel, who also co-wrote the script with Peter Atkins, and stars Gary Daniels, Costas Mandylor, Chris Penn, Isako Washio and Malcolm McDowell. A Japanese dub of the film was produced by Toei Video which featured the cast of the 1980s anime television series reprising their roles.

Fist of the North Star: The Legends of the True Savior is a Japanese animated film series produced by TMS Entertainment and North Stars Pictures based on the manga Fist of the North Star written by Buronson and illustrated by Tetsuo Hara. The films are updated re-imaginings of the events depicted in the manga, and include additional details, new characters and minor alterations to some events. The series spans three theatrical films and two OVAs, each focusing on a different character from the manga. These were released in Japan during a three-year span between 2006 and 2008, culminating with the 25th anniversary of the original manga. The first film, as well as both OVAs, were distributed by Toho. A portion of the project's budget came from a trust fund established by SMBC Friend Securities, which raised over 23 billion yen.

Tōru Murakawa is a Japanese film director. He is most famous for his collaborations with the actor Yūsaku Matsuda in both film and television. 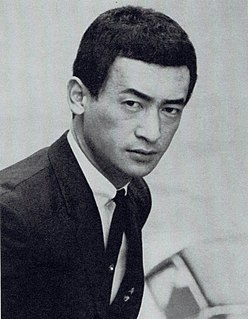 Shinji Yamashita is a Japanese actor who is represented by the talent agency From First Production. He graduated from Shimonoseki Commercial High School and dropped out from Chuo University's Faculty of Letters.

Tappei Shimokawa was a Japanese actor. He attended Musashino Art University, but withdrew before completing his degree. In 1939, he joined Bungakuza Theatre Company but left in 1952. He is well known for his roles in Taiyō ni Hoero! and Akira Kurosawa`s Dodes'ka-den.