The Yakushev-Borzov YakB-12.7 mm [1] is a remotely controlled 12.7×108mm caliber four-barrel rotary cannon developed by the Soviet Union in 1973 for the Mil Mi-24 attack gunship and low-capacity troop transporter, with 1470 rounds, which can also be mounted in GUV-8700 machine-gun pods with 750 rounds. It has a high rate of fire (4–5,000 rounds per minute) and is also one of the few self-powered guns of the Gatling type (i.e. it is gas-operated, rather than requiring an external motor to operate).

On the Mi-24 it is mounted in the VSPU-24 undernose turret, with an azimuth of 60° to either side, an elevation of 20°, and a depression of 60°. The gun is slaved to the KPS-53AV undernose sighting system with a reflector sight in the front cockpit.

It was replaced by the fixed, side-mounted GSh-30K or the swivel-mounted GSh-23L in the late mark of the Mi-24 helicopters, as it did not provide enough firepower against dug-in or lightly armored targets that did not necessitate a rocket attack [2] but it is still used on Mil Mi-24, [3] Mil Mi-36, and Mil Mi-40 helicopters. 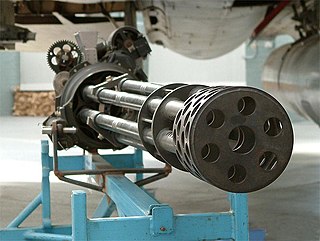 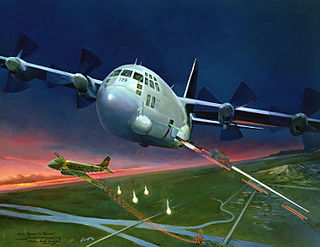 A gunship is a military aircraft armed with heavy guns, primarily intended for attacking ground targets. 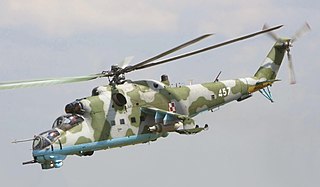 The M134 Minigun is a 7.62×51mm NATO six-barrel rotary machine gun with a high rate of fire. It features a Gatling-style rotating barrel assembly with an external power source, normally an electric motor. The "Mini" in the name is in comparison to larger-caliber designs that use a rotary barrel design, such as General Electric's earlier 20 mm M61 Vulcan, and "gun" for the use of rifle ammunition as opposed to autocannon shells. 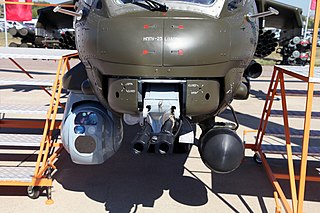 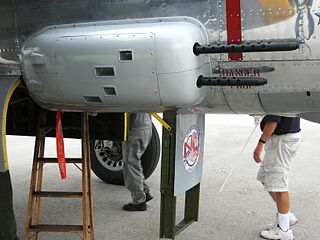 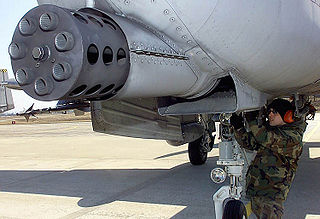 The XM214 is an American prototype 5.56 mm rotary-barreled machine gun. It was designed and built by General Electric. Also known as Microgun, the XM214 was a scaled-down smaller and lighter version of the M134 minigun, firing M193 5.56×45mm ammunition.

The GAU-19/A is an electrically-driven, three-barrel rotary heavy machine gun that fires the .50 BMG (12.7×99mm) cartridge.

The Glagolev-Shipunov-GryazevGShG-7.62 is four-barreled rotary machine gun designed in the Soviet Union, similar to firearms such as the M134 Minigun. It is a gas operated, self-powered weapon, which is in contrast with most other rotary guns. It was developed in 1968–1970 for the Mi-24 helicopter together with YakB 12.7mm machine gun, and is currently used in GUV-8700 gun pods, and flexible mounts on Kamov Ka-29.