Last updated December 08, 2021
In this Chinese name, the family name is Yang .

Yang Jun-Xing (Chinese :杨君兴) is a Chinese herpetologist and ichthyologist with the Kunming Institute of Zoology. [1] [2] As of 2018, Yang authored 9 species of fish and amphibians. [3]

Cyprinidae is a family of freshwater fish, commonly called the carp or minnow family. It includes the carps, the true minnows, and relatives like the barbs and barbels. Cyprinidae is the largest and most diverse fish family and the largest vertebrate animal family in general, with about 3,000 species of which only 1,270 remain extant, divided into about 370 genera. Cyprinids range from about 12 mm in size to the 3-m giant barb. By genus and species count, the family makes up more than two-thirds of the ostariophysian order Cypriniformes. The family name is derived from the Greek word kyprînos.

Sinocyclocheilus is a genus of freshwater fish in the family Cyprinidae endemic to China, where only found in Guangxi, Guizhou and Yunnan. Almost all of its species live in or around caves and most of these have adaptions typical of cavefish such as a lack of scales, lack of pigmentation and reduced eyes. Several species have an unusual hunchbacked appearance and some of the cave-dwellers have a "horn" on the back, the function of which is unclear. In contrast, the Sinocyclocheilus species that live aboveground, as well as a few found underground, show no clear cavefish adaptions. They are relatively small fish reaching up to 23 cm (9.1 in) in length. The individual species have small ranges and populations, leading to the status of most of the evaluated species as threatened. Many species populations in the genus have yet to be evaluated by the IUCN.

Garra is a genus of fish in the family Cyprinidae. These fish are one example of the "log suckers", sucker-mouthed barbs and other cyprinids commonly kept in aquaria to keep down algae. The doctor fish of Anatolia and the Middle East belongs in this genus. The majority of the more than 140 species of garras are native to Asia, but about one-fifth of the species are from Africa.

Schistura is a genus of fish in the stone loach family Nemacheilidae native to the streams and rivers of the southern and eastern Asia. Some of these species are troglobitic.

Yunnanilus is a genus of small stone loaches that are endemic to southeastern China, especially Guangxi and Yunnan. They are found in rivers, streams and lakes; some species are restricted to caves. 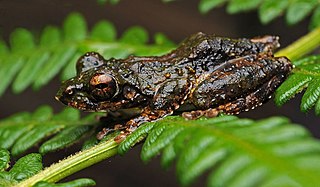 Kurixalus naso, also known as uphill tree frog, long-snouted treefrog, and Annandale's high altitude frog, is a species of frog in the family Rhacophoridae. It is found in northeastern India, southern Tibet, and Bhutan. A related but unnamed species is found in Myanmar and Yunnan (China). Furthermore, it is possible that Kurixalus yangi is a junior synonym of Kurixalus naso.

Psilorhynchus is a genus of fish in the family Psilorhynchidae native to South Asia. This genus is the only member of its family. The members of Psilorhynchus are small benthic fishes which occur in rivers and streams with fast to swift currents, hence they are often referred to a torrent minnows. They are distributed in southern Asia, in the Indo-Burma region and the Western Ghats. The genus is the sister group to the family Cyprinidae, and with that family the Psilorhynchidae makes up the superfamily Cyprinoidea, with all the other cypriniform families in the superfamily Cobitoidea. 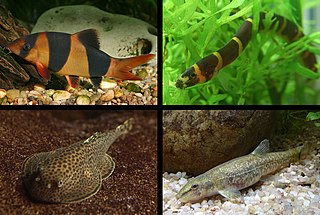 Loaches are fish of the superfamily Cobitoidea. They are freshwater, benthic (bottom-dwelling) fish found in rivers and creeks throughout Eurasia and northern Africa. Loaches are among the most diverse groups of fish; the 1249 known species of Cobitoidea comprise about 107 genera divided among 9 families.

Homatula is a genus of stone loaches endemic to China.

Liniparhomaloptera is a genus of fish in the family Gastromyzontidae found in China and Vietnam.

Paracobitis is a genus of Asian stone loaches.

Paralepidocephalus is a genus of loach endemic to Yunnan, China.

Microphysogobio is a genus of freshwater fish in the family Cyprinidae native to East Asia. 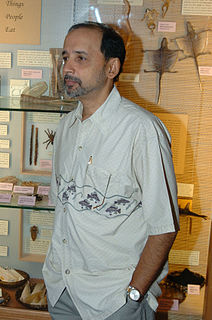 Rohan David Pethiyagoda, is one of Sri Lanka's leading naturalists and a taxonomist on Freshwater fish of Sri Lanka.

Sinocyclocheilus huizeensis is a species of freshwater ray-finned fish from the family Cyprinidae which is only known from Dalong Spring in the Jinshajiang Drainage, in Huize County, Yunnan, China.

Yunnanilus qujinensis is a species of freshwater ray-finned fish, a stone loach which is endemic to China. The species was described from specimens collected at a spring into the Hujiafen Reservoir in the Nanpanjiang River drainage near Qujing in Yunnan, its Specific name (zoology) refers to the city of Qujin. It has not yet been included in FishBase.

Bibarba parvoculus is a cave-dwelling species of loach endemic to a karst cave in southern China. Its only apparent congener is Bibarba bibarba, from which it is believed to have evolutionarily split in the Early Miocene.