Yaqubzai (Pashto : يعقوب زئی‎) are a Pashtun tribe of Gandapur living in Afghanistan and Pakistan.

Yaquzais are the descendants of Yaqub, the eldest son of Gandapur. Yaqub though the eldest one, was not the most brilliant of his four sons and hence the whole family of Gandapur was led by Ibrahim Khan the second son. The descendants of Ibrahim Khan are known as Ibrahim Zai(sons of Ibrahim). Yaquzai are a small segment of the whole tribe of Gandapurs. They have played no worth mentioning role in the Gandapur tribe struggle to establish themselves at Kulachi, Dera Ismail Khan in the 16th century A.D. [ citation needed ]

Kulachi is a city named after the Kulachi Baloch tribe and is the headquarters of Kulachi Tehsil of Dera Ismail Khan District in Khyber-Pakhtunkhwa province of Pakistan. It is located at 31°55′49″N70°27′31″E at an altitude of 209 metres (688 feet). 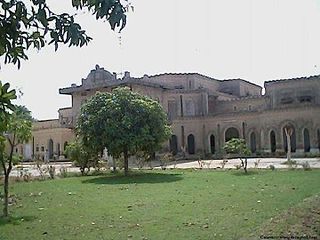 Dera Ismail Khan, often abbreviated to D.I. Khan, is a city in Khyber-Pakhtunkhwa Province, Pakistan. It is situated on the west bank of the Indus River, about 300 kilometres (190 mi) south of the provincial capital Peshawar, and 230 kilometres (140 mi) northwest of Multan, Punjab. The city is the capital of the district and tehsil of the same name. The predominant languages are Pashto and Saraiki. The total population of the city was 217,457 in the 2017 census, making it the largest city in the southern part of Khyber Pakhtunkhwa.

The original name of Gandapur was Tairi Khan. He had four sons and a daughter. The names of the sons and daughter are as follows; [ citation needed ]

Jochi was a Mongolian army commander who was the eldest son of Genghis Khan, and presumably one of the four sons by his principal wife Börte, though issues concerning his paternity followed him throughout his life. An accomplished military leader, he participated in his father's conquest of Central Asia, along with his brothers and uncles.

Syed Muhammad Jaunpuri, son of Syed Abdullah titled Syed Khan, was born in Jaunpur, Uttar Pradesh on Monday the 14th Jamadi-ul Awwal 847 Hijri corresponding to 9 September 1443 A.D. His grandfather, Syed Usman, came to India from Samarkand with his family and settled down in Jaunpur on the invitation of the Sharqiya King. He was the most famous Ulema, and a noted Alim-e-Deen. Syed Mohammed was a descendent of Imam Moosa Al-Kazim. There are twelve generations between Syed Mohammed and Imam Moosa Al-Kazim. Syed Mohammed claimed to be Imam Mahdi at Mecca in the 901 Hijri, and is revered as such by Mahdavia Community. He extensively traveled throughout India, Arabia and Khorasan.

The Bangash, are one of the Karlani Pashtun tribe of the border region of eastern Afghanistan and North Western Pakistan. They primarily inhabit the Kohat, Hangu, Doaba, Thall, and districts of Khyber Pakhtunkhwa, as well as portions of the Kurram Agency and Orakzai Agency in FATA. A large number of Bangash are also found in the northeastern section of the Paktia and Paktika Province in Afghanistan. Descendants of Bangash are also found in the Uttar Pradesh state of India, particularly in the city of Farrukhabad which was founded by Muhammad Khan Bangash in 1714.

The Kundi is a subtribe of Niazi Pashtun tribe [m], which inhabit a triangular area around Tank are pakhtoons along Tank-Pezu road extending up to Mulazai to the adjoining Bhittani area. The Mulazai is approachable through a road, which begins at old Gul Imam railway station. The area around this road is mainly inhabited by kundis with perhaps some pocket of Marwats. There is another circular road recently constructed which begins at Daraki (Maikhani) police station on Tank- Pezu road bypassing the Daraki village, Pai village and joins the Gul Imam-Mulazai road at Ama Khel. Thus if a map can be withdrawn the Kundi triangle is mainly between Tank-Pezu and Gul Imam-Mulazai road on one side joining the Kundi Maliks area at Shahalam and Mulazai while on the other side Jatater and Gandapur area around Gul Imam. The kundi area act as a buffer zone between Tank and Marwats connected through Pezu and Bayan pass. These were the old caravan routes and British were the first to construct asphalt roads on these routes. The main villages of Kundis are Gul Imam, Shahalam, Abezari, Daraki(Maikhani), Pai, Nandoor and Amakhel while Mulazai is perhaps mixture of kundi and Syeds from Kaniguram and marwats in some parts. Gul Imam and Shahalam are the ancestral home villages of Kundi KHANS. This are the major tribe of District Tank D.I.Khan and Kundis populate majority of Tank District of Khyber-Pakhtunkhwa in Pakistan, some parts of Afghanistan(Zabul), some of the parts in Balochistan and the ancestors of this tribe is basically from Zabul(Afghanistan) and KUNDIGHAR( kundayghar ) in South Waziristan Agency. A good number of Kundis have rendered their services in field of education, politics, civil services, judiciary research etc. in Pakistan. This tribe fought many wars against Nawabs of Tank in late 1800s but eventually won some wars and then defeated some of their area against the coalition power of Miankhail,Dotani,Babar and Nawab forces. IN 1870s, A great war was fought between these nation and more than one lac people get killed from both sides. Moreover, this tribe is always involved in internal conflicts as other Pashtoon tribes are involved.

Sur, also known as Suri, Zur and Zuri, are a historical Pashtun tribe living primarily in Afghanistan and Pakistan. They trace their descent to the Ghorids, a dynasty originating from Mandesh in the Ghor region of modern-day central Afghanistan. The founder of the Suri Empire in India, Sher Shah Suri, belonged to the Sur tribe. They ruled the Suri Empire from 1540 until they were removed from power in 1555 after the Battle of Sirhind by Humayun and the Persian army, who re-established the Mughal Empire.

Bāyazīd Pīr Rōshān or Pīr Rōkhān ‎ was a Pashtun warrior, poet, and revolutionary leader from Kaniguram, Waziristan. He wrote mostly in Pashto, but also in Persian, Hindustani, and Arabic, while he also spoke Ormuri. He is known for founding the Roshani movement, which gained many followers in the Pashtunistan region and produced numerous Pashto poets and writers. Pir Roshan created a Pashto alphabet, derived from the Arabic script with 13 new letters. A modified version of this alphabet continues to be used to write Pashto. Pir Roshan wrote Khayr al-Bayān, one of the earliest known books containing Pashto prose.

Nattuzai are part of the Gandapur tribe. Most of them live in Kulachi city but are scattered in the city and there is no Mohallah (Sector) after their name. 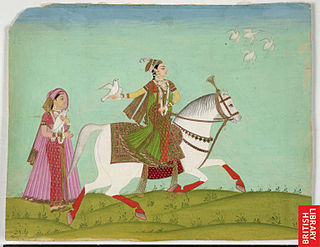 Chand Bibi, was an Indian Muslim regent and warrior. She acted as the Regent of Bijapur (1580–90) and Regent of Ahmednagar (1596–99). Chand Bibi is best known for defending Ahmednagar against the Mughal forces of Emperor Akbar in 1595.

Syed Faizullah Khan was the first Nawab of Rampur. The princely state of Rampur was set up in 1774, after the First Rohilla War, by the dismemberment of the Rohilla state of Rohilkhand. Faizullah Khan, the surviving heir of Ali Mohammed Khan and opponent of the forces of Awadh and the British East India Company in the war, was installed as ruler of what was a state. It bordered the Maratha Empire to the south, making it a strategic point.

Hafiz Khel is a sub-tribe of Gandapur tribe. About 80-85% are now migrated to Dera Ismail Khan and Tank Districts of Khyber Pakhtunkhwa Province and Zhob province of Baluchistan.

Farrukhabad gharana is one of six prominent playing styles or gharanas of North Indian tabla, in Hindustani classical music, and derives its name from Farrukhabad in Uttar Pradesh state. Some modern disciples of this gharana learn from the prestigious tabla organization known as Tablaniketan.