He was the second son of prince Vsevolod II Olgovich of Chernigov (who later became Grand Prince of Kiev) and Maria Mstislavna of Kiev (a daughter of grand prince Mstislav I Vladimirovich of Kiev). [2] His father died on August 1, 1146. [2] He began his political career as the prince of Ropesk (a town, located southwest of Starodub). [3]

In 1162, the younger brother of grand prince Rostislav I Mstislavich of Kiev, Vladimir Mstislavich seized Sluchesk, which had belonged to the Olgovichi. [4] On February 15, 1164, Svyatoslav II Olgovich died. [5]

In the spring in 1166, prince Svyatislav Vladimirovich of Vshchizh died, and he evidently had no sons. [6] Svyatoslav III Vsevolodovich as the senior prince of the Olgovichi held the authority to allocate the dead prince's domains, and he gave Starodub to Yaroslav. However, their cousin, prince Oleg Svyatoslavich of Novgorod-Seversk challenged the senior prince's preferential treatment of his own family. [7]

At the beginning of 1168, grand prince Mstislav II Izyaslavich of Kiev asked the princes of Rus' to help attack the Cumans; the Olgovichi sent Yaroslav, his brother Svyatoslav Vsevolodovich, as well as their cousins Oleg and Vsevolod Svyatoslavich. [8]

On March 8, 1169 the strong army of Andrey Yurevich took Kiev, [9] [10] but did not sack it. Mstislav Andreyevich appointed his uncle Gleb Yurevich to Kiev. [10] Nevertheless, when the dethroned grand prince attacked Kiev in February 1170, Yaroslav and his brother sent troops to him. [1]

At the beginning of 1181, Yaroslav's brother, who had been expelled from Kiev, launched a campaign against prince Vsevolod III Yurevich of Suzdalia. [1]

In April 1185, Igor Svyatoslavich invited Yaroslav to a campaign against the Cumans, but Yaroslav did not go and his sons were still too young to fight. Instead, he sent Olstin Oleksich along with the Kovui (the pagan auxiliaries fighting in the service of the Olgovichi) from the Chernigov area. [15] After learning of his cousin's defeat at the Kayala River, Svyatoslav Vsevolodovich requeted levies from Yaroslav. [16] After Igor Svyatoslavich had escaped from captivity, he visited Yaroslav and Chernigov to request military assistance. [17]

In the winter of 1187, Svyatoslav Vsevolodovich himself traveled to Chernigov to assemble the dynasty's troops in order to lead a campaign against the Cumans who had pillaged the district of Tatinets, a ford on the Dnieper River. Although Yaroslav joined the expedition and he went as far as the river Samara, he refused to continue and returned home. [18]

His brother died at the end of July 1194 (after 25 July). Shortly before his death, Svyatoslav Vsevolodovich summoned Rurik Rostislavich, indicating that Rurik would be his successor. [19]

In 1195, prince Roman Mstislavich of Volodymyr-Volynskyi commenced to conspire against his father-in-law, grand prince Rurik Rostislavich. When Roman appealed for help, Yaroslav agreed. [20]

Yaroslav proposed peace with Vsevolod Yurevich via envoys, and the latter also sent envoys to negotiate with Yaroslav. [22] Vsevolod Yurevich altered the terms of the Rostislavichi to further his own interest: he demanded the release of Mstislav Romanovich by Yaroslav and that Yaroslav break his alliance with Roman. [23]

The Lyubetkiy sinodik states that Yaroslav entered holy orders and took the name Vasily. He was buried in the Cathedral of St. Saviour next to his grandfather Oleg. [24] 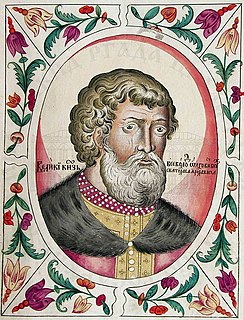 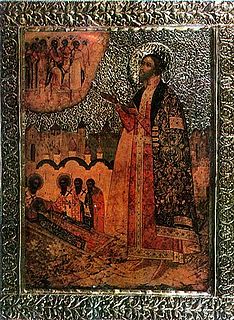 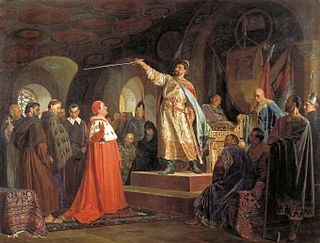 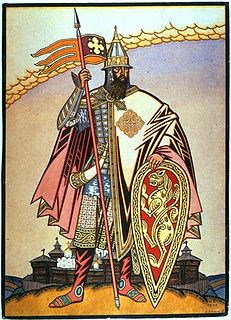 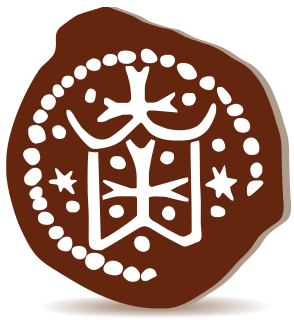 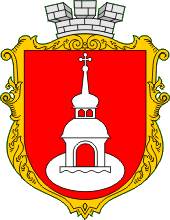 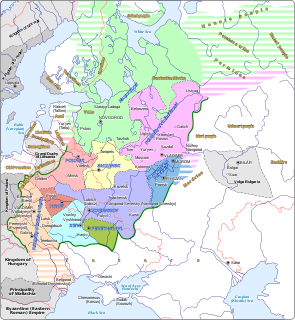 Roman Svyatoslavich or Roman the Handsome was prince of Tmutarakan in Kievan Rus'. The starting year of his reign is uncertain, but he reigned his principality from around 1073 or 1077. His former allies, the Cumans killed him after their unsuccessful joint campaign against his uncle, Vsevolod I of Kiev.