Yashahime: Princess Half-Demon (Japanese: 半妖の夜叉姫, Hepburn: Han'yō no Yashahime) is a Japanese anime television series produced by Sunrise. It is a sequel to the Inuyasha anime series, which itself is based on the original manga series written and illustrated by Rumiko Takahashi. It is the story of Towa Higurashi and Setsuna, Sesshomaru and Rin's twin daughters, and Moroha, Inuyasha and Kagome Higurashi's teenage daughter. The series' first season aired from October 2020 to March 2021. A second season is set to premiere in October 2021.

Several years after the events of Inuyasha: The Final Act , Sesshomaru and Rin's four-year-old daughter Towa is separated from her twin sister Setsuna and gets stranded in the modern era, where she is adopted into her paternal half-aunt Kagome Higurashi's family, raised by Kagome's younger brother Sota and his warmhearted wife Moe. Towa becomes close to her younger adopted sister, six-year-old Mei, who is Towa's "substitute" for Setsuna.

One decade later, when the twins are fourteen-years-old, Towa is reunited with Setsuna, who comes to the modern era through the vast time-traveling power of the mystical Sacred Tree of Ages. During their separation, Setsuna became a hardhearted, feisty demon-slayer working under Kohaku and does not remember her past as they and her dreams were stolen by the mythical Dream Butterfly. In order to restore them, the half-demon twins embark on an adventure while accompanied by their quarter-demon bounty hunter cousin Moroha, who is the feisty, hard-as-nails fourteen-year-old daughter of Kagome and Inuyasha, and who also has no knowledge of her parents; except that her mother is an uppermost-level human priestess and that her father is half dog-demon.

At times, the vital essence of the Sacred Tree of Ages finally reveals itself after many centuries of dormancy, warning them that a longtime rival of their deceased paternal dog-demon grandfather is planning on warping time itself, since Sesshomaru refuses to fight him directly in place of his father. At the same time, it is holding the teenage Rin in suspended animation for Sesshomaru because of her fatal connection to Zero, the elder sister of Kirinmaru and creator of the seven mystical Rainbow Pearls, whose mighty demonic abilities rival those of the Shikon Jewel itself.

The series was first announced in May 2020. [2] It aired from October 3, 2020 to March 20, 2021 on Yomiuri TV and Nippon TV. [3] [4] The series was produced by Sunrise, directed by Teruo Sato with main character designs by Inuyasha original creator Rumiko Takahashi. [2] Staff from Inuyasha returned, with Katsuyuki Sumisawa in charge of the scripts while Rumiko Takahashi acted as storyboard supervisor, [5] Yoshihito Hishinuma in charge of the anime character designs and Kaoru Wada composing the music. [2] The opening theme "New Era" is performed by the male idol group SixTONES, while the ending theme "Break" is performed by Uru. [6] [7] The second opening theme "Burn" is performed by NEWS, while the second ending theme "Kesshō" is performed by Ryokuōshoku Shakai. [8] [9]

Viz Media announced the rights to digital streaming, EST, and home video release of the series for North and Latin American territories. [2] [10] Medialink also announced that it has the rights to the series in Southeast Asian territories. [11] Later, Medialink also licensed to Animax Asia for TV airing from June 21. [12] Viz Media streamed the series on Crunchyroll, Funimation and Hulu. [13] On October 26, 2020, Funimation announced a partnership with Viz Media to release an English dub of the series, with the English cast of Inuyasha reprising their roles. [14] [15] Funimation began streaming the English dub on November 6, 2020 along with Hulu and Crunchyroll. [16] The English dub of the series began broadcasting on Adult Swim's Toonami programming block beginning on June 27, 2021. [17]

In August 2021, it was announced that a manga adaptation by Takashi Shiina is set to start in Shogakukan's Shōnen Sunday S on September 25, 2021. [23]

James Beckett and Monique Thomas of Anime News Network listed Yashahime: Princess Half-Demon as one of the worst anime of the winter 2021 season. [25] 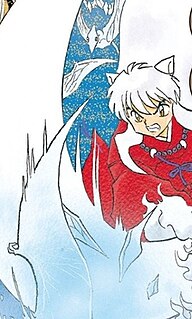 Inuyasha is a fictional character and the titular protagonist of the manga series Inuyasha, created by Rumiko Takahashi. He is a half-demon, half-human from the Sengoku period of Japan. Inuyasha also appears in the anime-only sequel, Yashahime: Princess Half-Demon.

Inuyasha the Movie: Swords of an Honorable Ruler is the third film of the Inuyasha series. The song, "Four Seasons", is performed by Namie Amuro. 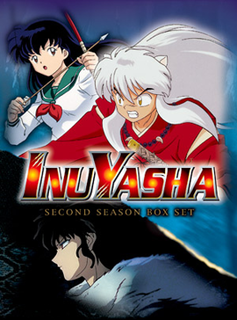 The second season of the anime series Inuyasha aired in Japan on ytv from May 28, 2001, through December 10, 2001. Based on the manga series of the same title by Rumiko Takahashi, the anime was produced by Sunrise. The series continues a half demon Inuyasha's and a high school girl Kagome Higurashi's journey, alongside their friends Shippo, Miroku and Sango to obtain the fragments of the shattered Jewel of Four Souls, a powerful jewel that had been hidden inside Kagome's body, and keep the shards from being used for evil.

The third season of the anime series Inuyasha aired in Japan on ytv from December 17, 2001, through August 12, 2002. Based on the manga series of the same title by Rumiko Takahashi, the anime was produced by Sunrise. The series continues a half demon Inuyasha and a high school girl Kagome Higurashi's journey alongside their friends Shippo, Miroku and Sango to obtain the fragments of the shattered Jewel of Four Souls, a powerful jewel that had been hidden inside Kagome's body, and keep the shards from being used for evil.

The episodes of the Japanese anime series Inuyasha: The Final Act are based on the last twenty-one volumes of the manga series of the same title by Rumiko Takahashi, continuing where the first adaptation left off. The series follows the half dog-demon, half human named Inuyasha, the fifteen-year-old junior high school student Kagome Higurashi and their close companions Miroku, Sango, Shippo and Kirara as they search for the last fragments of the Sacred Jewel of Four Souls and approach their final battle with Naraku. Viz Media licensed the series as InuYasha: The Final Act. It was released in Animax Asia and Animax India. The original staff and cast from the first Inuyasha anime adaptation were brought back together for the new series. The series premiered on Yomiuri TV on October 3, 2009 where it ran for twenty-six episodes, concluding on March 29, 2010. It is the first series to be produced and broadcast in 16:9 widescreen.

Kira Tozer is a Canadian voice actress for cartoons, anime and video games. Her major roles include Minka Mark on Littlest Pet Shop and Kagome Higurashi in the 2012 anime, Inuyasha: The Final Act. She married in 2013.

The Promised Neverland is a Japanese manga series written by Kaiu Shirai and illustrated by Posuka Demizu. It was serialized in Shueisha's Weekly Shōnen Jump from August 2016 to June 2020, with its chapters collected in twenty tankōbon volumes. In North America, Viz Media licensed the manga for English release and serialized it on their digital Weekly Shonen Jump magazine. The series follows a group of orphaned children in their plan to escape from their orphanage, after learning the dark truth behind their existence and the purpose of the orphanage.

That Time I Got Reincarnated as a Slime also known as TenSura (転スラ) or Slime Isekai is a Japanese fantasy light novel series written by Fuse, and illustrated by Mitz Vah. The story is about a salaryman who is murdered and reincarnates in a sword and sorcery world as a slime with unique powers and gathers allies to build his own nation of monsters.

Kaguya-sama: Love Is War is a Japanese romantic comedy manga series by Aka Akasaka. It began serialization in Shueisha's seinen manga magazine Miracle Jump in May 2015 and was transferred to Weekly Young Jump in March 2016. In North America, the manga is licensed in English by Viz Media.

Dr. Stone is a Japanese manga series written by Riichiro Inagaki and illustrated by the South Korean artist Boichi. It has been serialized in Shueisha's Weekly Shōnen Jump since March 2017, with its chapters collected in twenty-two tankōbon volumes as of August 2021. The story follows teenage scientific genius Senku Ishigami, who plans to rebuild civilization after humanity was mysteriously petrified for 3,700 years. Viz Media licensed the manga in North America. Shueisha began to simulpublish the series in English on the website and app Manga Plus since January 2019.

Demon Slayer: Kimetsu no Yaiba is a Japanese manga series written and illustrated by Koyoharu Gotouge. It follows teenage Tanjiro Kamado, who strives to become a demon slayer after his family is slaughtered and his younger sister Nezuko is turned into a demon. It was serialized in Shueisha's shōnen manga magazine Weekly Shōnen Jump from February 2016 to May 2020, with its chapters collected in 23 tankōbon volumes. It has been published in English by Viz Media and simulpublished by Shueisha on their Manga Plus platform.

Mao is a Japanese manga series written and illustrated by Rumiko Takahashi. It has been serialized in Shogakukan's Weekly Shōnen Sunday magazine since May 2019, with its chapters collected in eight tankōbon volumes as of March 2021. In North America, the series is licensed for English release by Viz Media.

Sleepy Princess in the Demon Castle is a Japanese manga series written and illustrated by Kagiji Kumanomata. It has been serialized in Shogakukan's Weekly Shōnen Sunday magazine since May 2016, with its chapters collected in nineteen tankōbon volumes as of August 2021. An anime television series adaptation by Doga Kobo aired from October to December 2020.

The fifth season of the My Hero Academia anime series was produced by Bones and directed by Kenji Nagasaki and Masahiro Mukai, following the story of the original manga series starting from the 21st volume. The fifth season premiered on March 27, 2021, on ytv and NTV. Funimation, Crunchyroll, and Hulu are streaming the season outside of Asia as it airs, and an English dub from Funimation launched on its service on April 10, 2021. Medialink licensed the series in Southeast Asia and South Asia, and is streaming the season on Netflix, Viu, Bilibili, WeTV, iQIYI, meWATCH, and other regional streaming services. The season premiered on Adult Swim's Toonami programming block on May 9, 2021.