Yasuo Ichikawa (一川 保夫, Ichikawa Yasuo, born February 6, 1942) is a Japanese politician of the Democratic Party of Japan, a member of the House of Councillors in the Diet (national legislature) and is the former Minister of Defence.

A native of Komatsu, Ishikawa and graduate of Mie University, he worked at the Ministry of Agriculture, Forestry and Fisheries from 1965 to 1990, and had served in the assembly of Ishikawa Prefecture for two terms since 1991. He was elected to the House of Representatives for the first time in 1996 as a member of the New Frontier Party by proportional representation – he failed to win the Ishikawa 2nd district from Liberal Democrat Yoshirō Mori four times in a row. After losing also his proportional seat in 2005, he was elected to the House of Councillors for the first time in 2007. In 2011, under Prime Minister Yoshihiko Noda's cabinet, he was selected as Minister of Defense [1]

In December 2011 he was the subject of a censure motion from the opposition LDP for failing to know the details of the 1995 rape where three US servicemen kidnapped and sexually assaulted a 12-year-old girl. This followed his subordinate Satoshi Tanaka speaking with reporters in a bar and using euphemisms for sexual assault to discuss moving the US Futenma airbase. Tanaka was sacked as director of the Okinawa Defense Bureau, [2] and in the cabinet reshuffle of January 13, 2012 Ichikawa was replaced by Naoki Tanaka. [3] 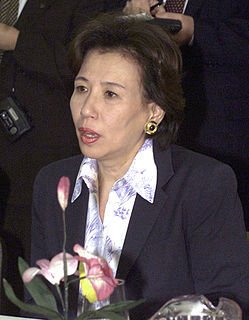 Makiko Tanaka is a Japanese politician. She is the daughter of former Prime Minister Kakuei Tanaka and his official wife Hana. 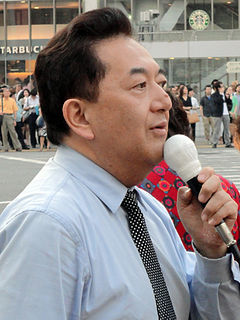 Yasuo Tanaka is a Japanese novelist and politician. He served as the governor of Nagano Prefecture from 2000 to 2006, became president of New Party Nippon, and has been elected to Japan's legislatures. 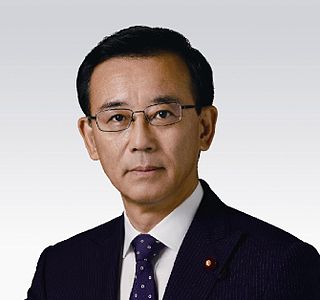 Sadakazu Tanigaki is a Japanese politician who served as a member of the House of Representatives from 1998 to 2016, as Minister of Finance from 2003 to 2006, as President of the Liberal Democratic Party and Leader of the Opposition from 2009 to 2012, as Minister of Justice from 2012 to 2014, and as LDP Secretary-General from 2014 to 2016. He was only the second LDP leader who was not simultaneously Prime Minister of Japan. He retired from politics following a spinal cord injury in 2016 that left him confined to a wheelchair.

The 1995 Okinawa rape incident took place on September 4, 1995, when three U.S. servicemen, U.S. Navy Seaman Marcus Gill and U.S. Marines Rodrico Harp and Kendrick Ledet, who were all serving at Camp Hansen on Okinawa, rented a van and kidnapped a 12-year-old Okinawan girl. They beat her, duct-taped her eyes and mouth shut, and bound her hands. Gill and Harp then raped her, while Ledet claimed he only pretended to do so out of fear of Gill. The incident led to further debate over the continued presence of U.S. forces in Japan. The offenders were tried and convicted in Japanese court by Japanese law, in accordance with the U.S.–Japan Status of Forces Agreement. The families of the defendants initially claimed that Japanese officials had racially discriminated against the men because they were all black and coerced confessions from them, but later retracted the claims. 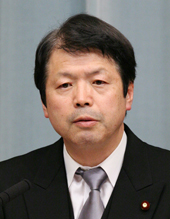 Hideo Hiraoka is a Japanese politician and lawyer who served in the House of Representatives from 2000 to 2012, and as Minister of Justice from 2011 to 2012. He was a member of the Democratic Party of Japan. As a Representative, he represented the 2nd District of Yamaguchi prefecture.

Sumio Mabuchi is a Japanese politician and a member of the House of Representatives in the Diet.

Kenji Yamaoka is a Japanese politician of the Democratic Party of Japan (DPJ), a member of the House of Representatives in the Diet. 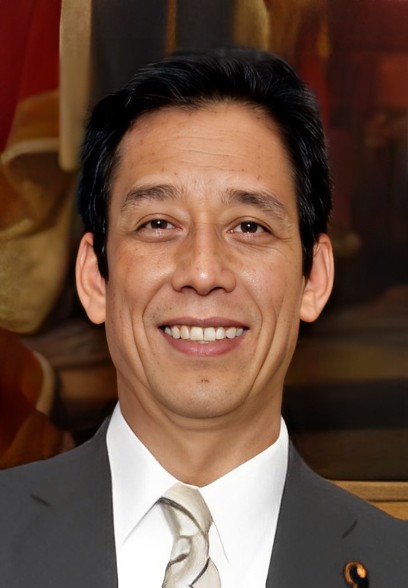 Tatsuo Kawabata is a Japanese former politician from the Democratic Party, and a member of the House of Representatives in the Diet from 1986 to 2017. A native of Ōmihachiman, Shiga, he attended Kyoto University and received a master's degree from it. His elder brother is former mayor of Omihachiman Gohei Kawabata. In September 2011 he was appointed as Minister of Internal Affairs and Communications in the cabinet of newly appointed prime minister Yoshihiko Noda. He was relieved from the post on 1 October 2012. In September 2017, Kawabata announced that he would not run in the 2017 general election and would retire from politics. 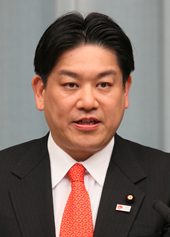 Yuichiro Hata was a Japanese politician of the Constitutional Democratic Party of Japan and a member of the House of Councillors in the Diet of Japan. A native of Setagaya, Tokyo, and graduate of Tamagawa University, he was elected to the House of Councillors for the first time in 1999, a position he retained until his death in 2020. Hata was the Minister of Land, Infrastructure, Transport and Tourism from 4 June 2012 to 26 December 2012. He was the son of the late Prime Minister Tsutomu Hata.

Yasuo is a masculine Japanese given name.

The 22nd Elections to the House of Councillors for the upper house of the legislature of Japan were held on July 11, 2010. In the last election in 2007, the Liberal Democratic Party (LDP) lost its majority to the Democratic Party (DPJ), which managed to gain the largest margin since its formation in 1996. The House of Councillors is elected by halves to six-year terms. The seats up for election in 2010 were last contested in the 2004 election.

Ishikawa 2nd district is a single-member constituency of the House of Representatives, the lower house of the national Diet of Japan. It is located in Southern Ishikawa and covers the cities of Komatsu, Kaga, Nomi, Hakusan, Nonoichi and the Nomi county with only one remaining municipality: Kawakita town. As of 2012, 318,892 eligible voters were registered in the district giving it slightly above average voting weight.

People's Life First was a short-lived political party in Japan. It had 37 out of the 480 seats in the House of Representatives, and 12 in the 242-member House of Councillors. On 28 November 2012, the party merged into Governor of Shiga Yukiko Kada's Japan Future Party based in Ōtsu. 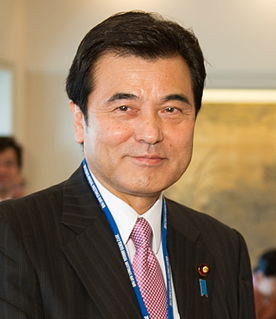 Koriki Jojima, is a Japanese politician who served four terms in the House of Representatives and was Minister of Finance from 1 October to 26 December 2012. 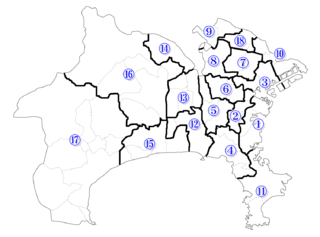 Kanagawa 10th district is a single-member electoral district for the House of Representatives, the lower house of the National Diet of Japan. It is located in North-eastern Kanagawa Prefecture and consists of Kawasaki City's three eastern wards of Kawasaki, Saiwai and Nakahara. As of September 2011, 494,755 voters were registered in the district, giving its voters the second lowest vote weight in the country behind Chiba 4th district.