Yau Kom Tau Village is located in this area. 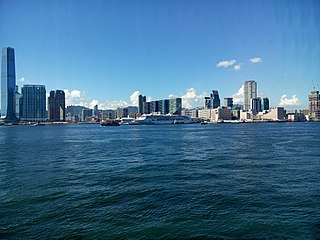 Yau Ma Tei, formerly called Waterloo after Waterloo Road, is an MTR station located in Yau Ma Tei, Kowloon. It is served by the Kwun Tong line and the Tsuen Wan line. The station opened on 22 December 1979 and was renamed as Yau Ma Tei on 31 May 1985 along with Argyle and Chater (Central).

Route 5 is Hong Kong trunk road that runs in an east-west direction across Kowloon and ends in Tsuen Wan in the New Territories, where it connects to Route 9. It is one of the most seriously congested routes in Kowloon, as it serves as an interchange to the Hung Hom Cross-Harbour Tunnel, especially during peak hours.

Shap Pat Heung is an area in the New Territories of Hong Kong. Located south of Yuen Long and northeast of Tai Tong, the area occupied the plain north of hills of Tai Lam. The Cantonese name Shap Pat Heung means eighteen villages at its beginning. It was later expanded to thirty villages. Administratively, it is part of the Yuen Long District.

Nan Fung Centre is a commercial and shopping centre in Castle Peak Road, Tsuen Wan, New Territories, Hong Kong, located nearby the MTR Tsuen Wan station and a bus terminus at its ground floor. It was developed by Nan Fung Group in 1983 and it is one of the earliest large-scale commercial centres in the district.

Approach Beach is a gazetted beach located near Yau Kom Tau on Castle Peak Road in Ting Kau, New Territories, Hong Kong. The beach has barbecue pits and is managed by the Leisure and Cultural Services Department of the Hong Kong Government. The beach is rated as Grade 2 by the Environmental Protection Department for its water quality. 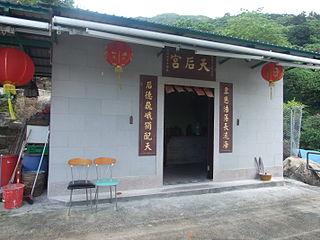 Yau Kom Tau or Yau Kam Tau may refer to: