Yefim Moiseevich Fomin (Russian: Ефим Моисеевич Фомин), (15 January 1909 – 26 June 1941), was a Soviet political commissar. He is known for his part in the 1941 Defense of Brest Fortress, during which the German Army captured and immediately executed him. [1]

Fomin was born into a Jewish family in Kolyshki in Vitebsk Governorate (present-day Liozna Raion, Belarus) in 1909. [2] He lost his parents as a young boy and was raised in orphanages. In 1924, Fomin joined the Komsomol, at the age of 15. He worked at a shoe factory in Vitebsk and then moved to Pskov. There, he was sent to the Communist Party school to prepare for a career as a professional party worker. In 1930, at age of 21, while at the party school, Fomin became a member of the Soviet Communist Party. When he returned from the school, he was assigned to be a propagandist of the Pskov City Committee of the Communist Party.

In 1932 the Party assigned Fomin to the Soviet Army, where he became a political commissar and began a nomadic life of the military: Pskov - Crimea - Kharkiv - Moscow - Latvia. [3]

In August 1938, Fomin was designated as the divisional commissar of the 23rd (Kharkov) Rifle Division, in 1940, he served in Daugavpils, Latvia. However, in March 1941, he was demoted to a regimental commissar and assigned to the 84th Rifle Regiment of the 6th Rifle Division stationed in Brest, Belarus. [4]

On 21 June 1941, Fomin wanted to travel to Daugavpils to bring his family to Brest, but he failed to get a train ticket due to a big crowd of people at the railway station. On 22 June, Fomin was at the Brest Fortress, when the Wehrmacht started the war codenamed Operation Barbarossa. As the only higher commander present he took over the command of the group of Soviet soldiers that defended the Kholm Gate.

The battle for the fortress continued for several days. Fomin moved to the northern part of the fortress' Central island where he was captured on 26 June 1941. [5] Fomin was identified as a commissar and a Jew and due to the Commissar Order he was shot without delay, presumably, near the Kholm Gate.

In January 1957, Fomin was posthumously awarded the Order of Lenin for his role in the defense of the Brest Fortress. In May 1991, at a reunion of veterans of the 6th Rifle Division, Fomin's demotion to regimental commissar was posthumously revoked and he was restored to the rank of divisional commissar. [6]

Brest, formerly Brest-Litowsk, is a city in Belarus at the border with Poland opposite the Polish city of Terespol, where the Bug and Mukhavets rivers meet. It is the capital city of the Brest Region.

The 4th Army was a Soviet field army of World War II that served on the Eastern front of World War II and in the Caucasus during the Cold War. It was disbanded after the fall of the Soviet Union, with its divisions being withdrawn to Russia and disbanded. 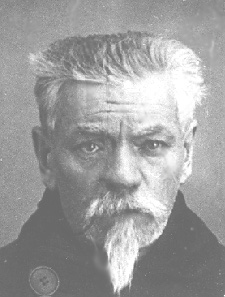 Sergei Pavlovich Medvedev was a Russian Bolshevik revolutionary, metalworker, and trade union organizer. He was born into the peasant estate in a family of Russian ethnicity in Kortino, Moscow Governorate and grew up in the countryside near Moscow and in St. Petersburg. After receiving a primary school education, he began factory work at age thirteen. He first worked at the Obukhov factory in St. Petersburg and participated in the 1901 Obukhov strike. He became a socialist at age fifteen and joined the Bolsheviks when the Russian Social Democratic Workers Party split in 1903.

The defence of Brest Fortress was the first major battle of Operation Barbarossa, the Axis invasion of the Soviet Union launched on 22 June 1941, lasting from 22 to 29 June. The defenders had received no warning of the attack, and the German Heer (army) expected to take Brest on the first day using only infantry and artillery. The defence of the fortress by the Red Army lasted for several days; the defenders lost many men killed and captured and German ground forces took the fortress only after two bombardments by the Luftwaffe.

The following lists events that happened during 1941 in the Union of Soviet Socialist Republics.

The 19th Army was a field army of the Soviet Union's Red Army, formed in 1941 and active during the Second World War. The army was formed three times, although only two of its formations saw combat.

Pyotr Mikhaylovich Gavrilov was a Soviet officer known as the hero of the Defense of Brest Fortress. 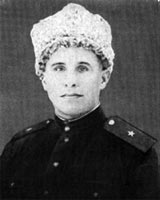 Ivan Sidorovich Lazarenko was a Red Army major general and a posthumous Hero of the Soviet Union.

Fortress of War is a 2010 Russian-Belarusian war film recounting the June 1941 defense of Brest Fortress against invading Wehrmacht forces in the opening stages of Operation Barbarossa, Nazi Germany's invasion of the Soviet Union during World War II. Events are narrated from the perspective of 15-year-old Sasha Akimov, centering on three resistance zones holding out against the protracted German siege. The defending forces are led by regiment commander Major Pyotr Gavrilov, with Regimental Commissar Yefim Fomin, and the head of the 9th Frontier Outpost, Lieutenant Andrey Mitrofanovich Kizhevatov.

Abukhadzhi Idrisov was a Chechen sniper and machine-gunner in the Red Army during the Second World War. Throughout the war he killed a total of 349 enemy combatants for which he was awarded the title Hero of the Soviet Union just shortly before he was deported to the Kazakh SSR solely on the grounds of his Chechen ethnicity. He was only able to return to his native village in Chechnya in 1957 where he worked in agriculture after the Chechen nation was granted the right of return in the Khrushchev era.

The 42nd Rifle Division was a unit of the Red Army during the Great Patriotic War. The division, first formed in 1940, was nearly destroyed in the opening days of the Operation Barbarossa defending the Brest Fortress. Disbanded in late December 1941 and immediately reformed in the Volga Military District. The division then served on the front until disbanded at the end of the war.

The 61st Rifle Corps was a Red Army infantry corps during World War II, formed twice. The 61st Rifle Corps was formed firmed in Tula during September 1939. After Operation Barbarossa, it was transferred to the front in Belarus and fought in the Battle of Smolensk. After suffering heavy losses at Smolensk, it was disbanded in early August 1941. Reformed in spring 1943, the corps fought in Operation Kutuzov, the Lublin–Brest Offensive and the Berlin Offensive. The corps was disbanded after the end of the war in summer 1945.

The 14th Mechanized Corps was a mechanized corps of the Red Army. Formed in March 1941 and stationed in western Belarus, the corps was destroyed in the Battle of Białystok–Minsk in June of the same year.

Alexander Gavrilovich Moiseyevsky was a Soviet Army major general and a Hero of the Soviet Union.

The 334th Rifle Division was formed in August 1941, as a standard Red Army rifle division in the Volga Military District. For most of the war it followed a very similar combat path to that of the 332nd Rifle Division, sometimes serving on adjacent sectors. It fought in the Battle of Moscow and during the winter counteroffensive was assigned to 4th Shock Army, where it would remain until November 1943. During this offensive it helped carve out the Toropets Salient, where it would remain until the autumn of 1943 when it helped to liberate Velizh and began advancing westward again. In the first days of the 1944 summer offensive the 334th shared credit with several other units in the liberation of Vitebsk and was awarded that name as an honorific. The unit advanced into East Prussia in January 1945, distinguishing itself in the siege of the heavily-fortified city of Königsberg and the clearing of the Baltic coast. It continued to serve briefly into the postwar period.

The 19th Guards Rifle Division was formed from the first formation of the 366th Rifle Division on March 17, 1942. At this time it was in the 52nd Army of Volkhov Front, taking part in the Lyuban Offensive Operation, which was planned to encircle and defeat the enemy forces laying siege to Leningrad. However, just at that time the German 18th Army was in the process of cutting off the Soviet Lyuban grouping in a pocket, and over the following months the division was nearly destroyed. Enough survivors emerged from the swamps in June and July to rebuild the unit, and it fought in the Second Sinyavino Offensive before it was shifted south into Kalinin Front to take part in the battle and siege of Velikiye Luki in December. In the summer of 1943 the 19th Guards fought in the battles for Smolensk, and won its first battle honor, "Rudnya". in September. During the offensive in the summer of 1944 it was awarded the Order of the Red Banner for its successes in the fighting around Vitebsk. It was further honored in February, 1945, with the Order of Lenin for its role in the victories in East Prussia. In the summer the division was moved by rail with its 39th Army to the Far East and saw action in the Soviet invasion of Manchuria in August, winning its second battle honor, "Khingan", for its services. The division continued to see service well into the postwar era.

Ivan Nikolaevich Zubachyov was a Soviet officer known for the defense of the Citadel of Brest Fortress.

The 215th Rifle Division was an infantry division of the Red Army during World War II that continued to serve in the Soviet Army during the early years of the Cold War.