YHS majority shareholder is Ng Teng Fong's Far East Organization, and it also develops houses and condominiums. The company also has operations in over 60 countries which includes Thailand, China, Singapore, Malaysia, United States and franchises in Indonesia and Mauritius.

The company has its history dated back to 1900. Founded by Yeo Keng Lian (Chinese: 杨景连), a native of Fujian, China, who began his business career by making soy sauce in Zhangzhou with the Yeo Hiap Seng Sauce Factory (Chinese:杨协成) in 1901. Then he emigrated to Singapore in the 1930s, where he re-established the Yeo Hiap Seng Sauce Factory in 1938. [3] [4] Yeo died in Singapore in 1960. [3]

The name Yeo Hiap Seng is of Christian origin with Hiap Seng meaning unity of Christ as Yeo was Presbyterian. [3]

Although founded in 1938, the company was incorporated in Singapore on 20 December 1955 as Yeo Hiap Seng Canning and Sauce Factory Private Limited and was listed on 7 November 1968 and renamed to its present shorter name.

In June 1995, Robert Ng took over as chairman of Yeo Hiap Seng (YHS). His chairmanship came at the same time as his family increased its stake in the company to 24.9%, just short of the 25% threshold above which they would be required by law to make an offer to buy out all other shareholders. This marked a step forward in his fight with Malaysian billionaire investor Quek Leng Chan for control of YHS and its land holdings in Singapore's Bukit Timah district, which could be worth billions of dollars were they redeveloped into residential real estate. [5] In the end, Ng and his father were able to successfully take advantage of squabbles within the Yeo family to buy up 86% of YHS' stock. [6] Their battle to gain control of the company was later described as "one of the most colourful take-over struggles in Singapore's history" and led to YHS' transformation from a food company to a luxury real estate developer. [7]

Kikkoman Corporation is a Japanese food manufacturer. Its main products and services include soy sauce, food seasoning and flavoring, mirin, shōchū, and sake, juice and other beverages, pharmaceuticals, and restaurant management services. 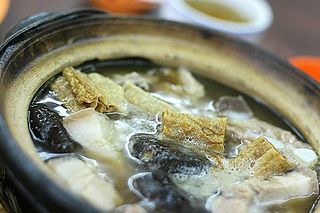 Bak kut teh is a pork rib dish cooked in broth popularly served in Malaysia and Singapore where there is a predominant Hoklo and Teochew community, and also in neighbouring areas like Indonesia in Riau Islands and Southern Thailand.

Ng Teng Fong was a Singaporean real estate tycoon with a major presence in Hong Kong. He is the father of Robert Ng. In 1997, Forbes listed the two as the 30th richest people in the world. 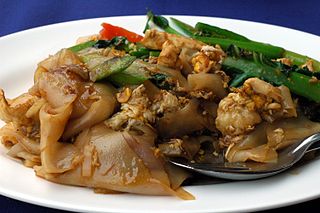 Phat si-io is a Chinese-influenced stir fried noodle dish that is commonly eaten in Thailand. It is also quite popular in Thai restaurants around the world. 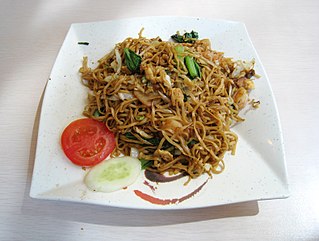 Mie goreng, also known as bakmi goreng, is an often spicy fried noodle dish, originating from Indonesia, common in Malaysia, Brunei Darussalam, and Singapore. It is made with thin yellow noodles fried in cooking oil with garlic, onion or shallots, fried prawn, chicken, beef, or sliced bakso (meatballs), chili, Chinese cabbage, cabbages, tomatoes, egg, and other vegetables. Ubiquitous in Indonesia, it is sold by food vendors from street-hawkers, warungs, to high-end restaurants. It is an Indonesian one-dish meal favourite, although street food hawkers commonly sell it together with nasi goreng. It is commonly available at Mamak stalls in Singapore, Brunei, and Malaysia and is often spicy. In Sri Lanka, mee goreng is a popular dish due to Malay cultural influences and is sold at street food stalls around the country.

Yeoh Ghim SengBBM JP was Speaker of the Parliament of Singapore from 1970 to 1989. He is said to be one of the longest serving Speakers of any parliament in the world.

100plus is a brand of isotonic sports drink manufactured by Fraser and Neave Limited, a global food and beverage conglomerate headquartered in Singapore. It was created and launched in 1983 in both Malaysia and Singapore with the name commemorates 100 years of Fraser and Neave in Asia.

Daryl Ng Win-kongJP, is a Singaporean businessman and company director based in Hong Kong. He is the eldest son of Robert Ng, chairman of Sino Group and its subsidiaries. Daryl is deputy chairman of Sino Group, which comprises Sino Land, Sino Hotels and Tsim Sha Tsui Properties. He is also Chairman of Yeo Hiap Seng. 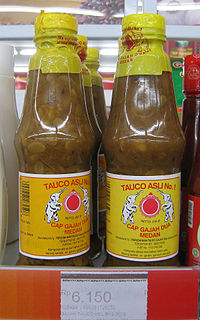 Tauco, Taucu, Taotjo or Tauchu is a paste made from preserved fermented yellow soybeans in Chinese Indonesian and Malaysian cuisines. Tauco is made by boiling yellow soybeans, grinding them, mixing them with flour and fermenting them in order to make a soy paste. The soy paste is soaked in salt water and sun-dried for several weeks, furthering the fermentation process, until the color of the paste has turned yellow-reddish. Good tauco has a distinct aroma. The sauce is also commonly used in other Indonesian cuisines traditions, such as Sundanese cuisine and Javanese cuisine. Taucu is generally used in cooking by Chinese Malaysian, Singaporean and Bruneian.

Kwetiau goreng is a Chinese Indonesian stir fried flat rice noodle dish from Indonesia and popular in Southeast Asia. This flavorful and spicy fried noodle dish is common in Indonesia. It is made from noodles, locally known as kwetiau, which are stir fried in cooking oil with garlic, onion or shallots, beef, chicken, fried prawn, crab or sliced bakso (meatballs), chili, Chinese cabbage, cabbages, tomatoes, egg, and other vegetables with an ample amount of kecap manis. In Asia, kwetiau is available in two forms, dried and fresh. Its recipe is quite similar to another Chinese Indonesian favourite, mie goreng, with the exception of replacing yellow wheat noodles for flat rice noodles.

Chun King was an American line of canned Chinese food products founded in the 1940s by Jeno Paulucci, who also developed Jeno's Pizza Rolls and frozen pizza, and the Michelina's brand of frozen food products, among many others. By 1962, Chun King was bringing in $30 million in annual revenue and accounted for half of all U.S. sales of prepared Chinese food. Chun King was sold to the R. J. Reynolds Tobacco Company, in 1966 for $63 million. 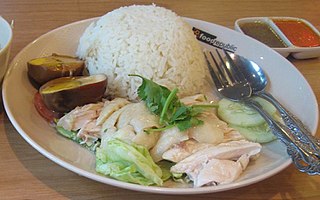 Hainanese chicken rice is a dish of poached chicken and seasoned rice, served with chilli sauce and usually with cucumber garnishes. It was created by immigrants from Hainan in southern China and adapted from the Hainanese dish Wenchang chicken. It is considered one of the national dishes of Singapore and is most commonly associated with Singaporean cuisine but is also seen throughout Southeast Asia, particularly Malaysia where it is a culinary staple.