Last updated January 22, 2021
In this Eastern Slavic name, the patronymic is Pavlovichand the family name is Krylatov.

Krylatov was born on 23 February 1934 in Lysva in the family of Pavel Krylatov and his wife Zoya. After graduating from Perm Music School in the Moscow Conservatory (1953–1959), Yevgeny Krylatov studied at once in two faculties: in the class of the composition with Professor Mikhail Chulaki and in the class of piano with Professor Vladimir Nathanson.

Yevgeny Maksimovich Primakov was a Russian politician and diplomat who served as Prime Minister of Russia from 1998 to 1999. During his long career, he also served as Foreign Minister, Speaker of the Supreme Soviet of the Soviet Union, and chief of the intelligence service. Primakov was an academician (Arabist) and a member of the Presidium of the Russian Academy of Sciences. 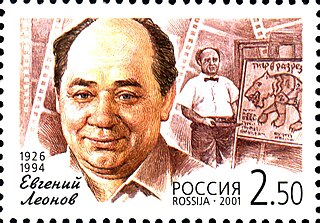 Yevgeny Pavlovich Leonov was a famous Soviet and Russian actor who played main parts in several of the most famous Soviet films, such as Gentlemen of Fortune, Mimino and Striped Trip. Called "one of Russia's best-loved actors", he also provided the voice for many Soviet cartoon characters, including Vinny Pukh (Winnie-the-Pooh). 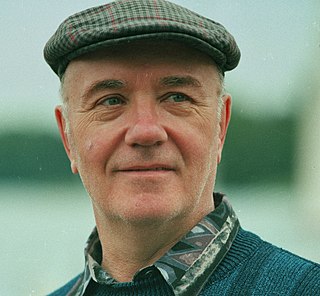 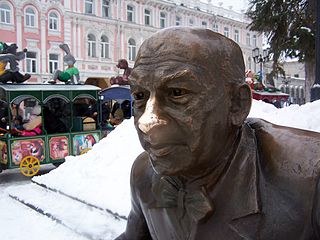 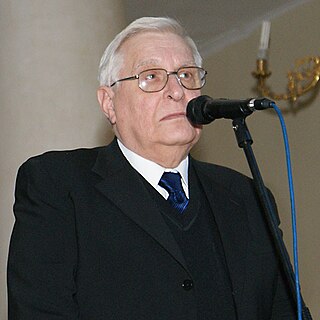 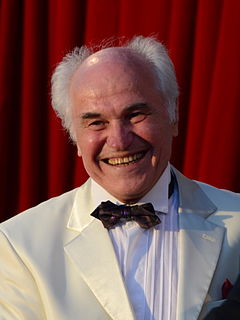 Eugen Doga is a Soviet, Moldovan and Russian composer. He was awarded the People's Artist of the USSR in 1987.

Yevgeny Yakovlevich Vesnik was a Russian and Soviet stage and a film actor. The son of Yakov Vesnik, the first director of the Kryvorizhstal plant, he fought the Germans in the Second World War. He worked at the Maly Theatre from 1963 and was named a People's Artist of the USSR in 1989, three years before his retirement from the stage.

Yevgeny Serafimovich Veltistov (1934-1989) was a Soviet writer and screenwriter. He was a Laureate of the State Prize of the USSR (1982).

Vladimir Ivanovich Popov was a Soviet and Russian animator and art director. A member of ASIFA. He was named Honoured Artist of the RSFSR in 1986. 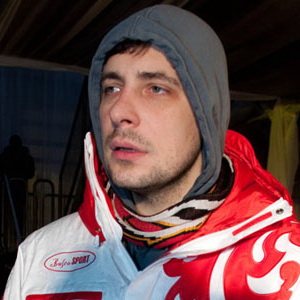 Yevgeny Eduardovich Tsyganov is a Russian film and theater actor. 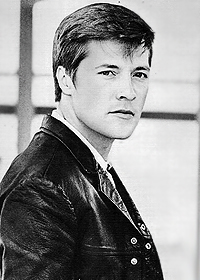 Evgeny Ilich Zharikov was a Soviet and Russian film actor who was awarded the title People's Artist of the RSFSR (1989) and the USSR State Prize (1978).

The Age of Pioneers, also known as Spacewalk or The Spacewalker, is a Russian historical drama film about cosmonaut Alexei Leonov, the first human to perform a spacewalk. Leonov himself served as a consultant for the film. The Age of Pioneers was directed by Dmitriy Kiselev and co-produced by Timur Bekmambetov and Yevgeny Mironov, the latter also starred in the leading role. 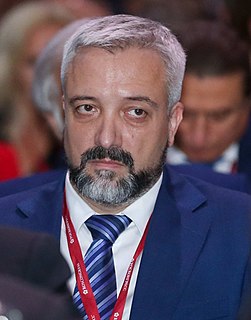 Yevgeny Alexandrovich Primakov is a journalist, TV host, politician and diplomat serving as Head of the Federal Agency for the Commonwealth of Independent States, Compatriots Living Abroad and International Humanitarian Cooperation since 25 June 2020. He previously was the Member of the State Duma from 2018 to 2020. In the media, he is known by the pseudonym Yevgeny Sandro.

Yevgeny Nikolayevich Ponasenkov is a Russian self-proclaimed historian, political writer, journalist, theater director, television host, actor and singer. He was a member of the public organization Russian Academy of Sciences and Arts. He is the author of works on the Napoleonic Wars. Ponasenkov is an organizer of cultural events.

The Boy From 5B is a 1972 Soviet comedy film directed by Ilya Frez. It was edited into three parts, given a narrative voiceover and shown on BBC 1 television in the UK on consecutive mornings during the 1978 Easter and 1979 and 1980 summer holidays.

Umka is a 1969 Soviet animated film. It is based on children's book of the same name by Yuri Yakovlev, who also wrote the screenplay for the film. Umka means "polar bear" in Chukchi language.