The Yomiuri Shimbun (讀賣新聞/読売新聞) (lit. Reading-selling Newspaper or Selling by Reading Newspaper) is a Japanese newspaper published in Tokyo, Osaka, Fukuoka, and other major Japanese cities. [4] It is one of the five major newspapers in Japan; the other four are the Asahi Shimbun , the Chunichi Shimbun (Tokyo Shimbun) the Mainichi Shimbun , and the Nihon Keizai Shimbun . It is headquartered in Otemachi, Chiyoda, Tokyo. [5]

It is a newspaper that represents Tokyo and generally has a conservative orientation. It is one of Japan's leading newspapers, along with the Osaka-based liberal (Third way) Asahi Shimbun and the Nagoya-based Social democratic Chunichi Shimbun.

It is published by regional bureaus, all of them subsidiaries of The Yomiuri Shimbun Holdings, Japan's largest media conglomerate by revenue and the second largest media conglomerate by size behind Sony, [6] [7] which is privately held and controlled, directly and indirectly, by the Shōriki family - descendants and relatives of Matsutarō Shōriki. The Holdings has been owned by the family since Matsutarō Shōriki's purchase of the newspaper in 1924 (currently owning a total of 45.26% stock); despite its control, the family is not involved in its executive operations.

Founded in 1874, [8] the Yomiuri Shimbun is credited with having the largest newspaper circulation in the world as of 2019, [9] [10] having a morning circulation of 7.0 million as of June 2021. [3] The paper is printed twice a day and in several different local editions.

Yomiuri Shimbun established the Yomiuri Prize in 1949. Its winners have included Yukio Mishima and Haruki Murakami.

The Yomiuri was launched in 1874 by the Nisshusha newspaper company as a small daily newspaper. Throughout the 1880s and 1890s the paper came to be known as a literary arts publication with its regular inclusion of work by writers such as Ozaki Kōyō.

In 1924, Shoriki Matsutaro took over management of the company. His innovations included improved news coverage, a full-page radio program guide, and the establishment of Japan's first professional baseball team, now known as the Yomiuri Giants. The emphasis of the paper shifted to broad news coverage aimed at readers in the Tokyo area. By 1941 it had the largest circulation of any daily newspaper in the Tokyo area. In 1942, under wartime conditions, it merged with the Hochi Shimbun and became known as the Yomiuri-Hochi.

The Yomiuri was the center of a labor scandal in 1945 and 1946. In October 1945, a postwar "democratization group" called for the removal of Shoriki Matsutaro, who had supported Imperial Japan's policies during World War II. When Shoriki responded by firing five of the leading members of this group, the writers and editors launched the first "production control" strike on 27 October 1945. This method of striking became an important union tactic in the coal, railroad, and other industries during the postwar period. Shoriki Matsutaro was arrested in December 1945 as a Class-A war criminal and sent to Sugamo Prison. The Yomiuri's employees continued to produce the paper without heeding executive orders until a police raid on June 21, 1946. [11] The charges against Shoriki were dropped and he was released in 1948. According to research by Professor Tetsuo Arima of Waseda University on declassified documents stored at NARA, he agreed to work with the CIA as an informant. [12] [13]

In February 2009, the Yomiuri entered into a tie-up with The Wall Street Journal for editing, printing and distribution. Since March 2009 the major news headlines of the Journal's Asian edition have been summarized in Japanese in the evening edition of the Yomiuri.

The Yomiuri has a history of promoting nuclear power in Japan. [14] In May 2011, when Naoto Kan, then Prime Minister of Japan, asked the Chubu Electric Power Company to shut down several of its Hamaoka Nuclear Power Plants due to safety concerns, the Yomiuri called the request "abrupt" and a difficult situation for Chubu Electric's shareholders. It wrote that Kan "should seriously reflect on the way he made his request." [15] It then followed up with an article wondering how dangerous Hamaoka really was and called Kan's request "a political judgment that went beyond technological worthiness." [16] The next day damage to the pipes inside the condenser was discovered at one of the plants following a leak of seawater into the reactor. [17]

In 2012, the paper reported that Nobutaka Tsutsui, the Minister for Agriculture, had divulged secret information to a Chinese enterprise. Tsutsui sued the Yomiuri Shimbun for libel and was awarded 3.3 million yen in damages in 2015, on the basis that the truth of the allegations could not be confirmed. [18]

The Yomiuri newspaper said in an editorial in 2011 "No written material supporting the claim that government and military authorities were involved in the forcible and systematic recruitment of comfort women has been discovered", and that it regarded the Asian Women's Fund, set up to compensate for wartime abuses, as a failure based on a misunderstanding of history. [22] The New York Times reported on similar statements previously, writing that "The nation's (Japan's) largest newspaper, Yomiuri Shimbun, applauded the revisions" regarding removing the word "forcibly" from referring to laborers brought to Japan in the prewar period and revising the comfort women controversy. [23] Yomiuri editorials have also opposed the DPJ government and denounced denuclearization as "not a viable option". [24]

Other publications and ventures

Yomiuri Shimbun Holdings owns the Chuokoron-Shinsha publishing company, which it acquired in 1999, and the Nippon Television network. It is a member of the Asia News Network. The paper is known as the de facto financial patron of the baseball team Yomiuri Giants. They also sponsor the Japan Fantasy Novel Award annually. It has been a sponsor of the FIFA Club World Cup every time it has been held in Japan since 2006.

Subsequent CD-ROMs, "The Taishō Era", "The pre-war Showa Era I", and "The pre-war Showa era II" were completed eight years after the project was first conceived. "Postwar Recovery", the first part of a postwar Shōwa Era series that includes newspaper stories and images until 1960, is on the way.

The system of indexing each newspaper article and image makes the archives easier to search, and the CD-ROMs have been well received by users as a result. This digital resource is available in most major academic libraries in the United States. 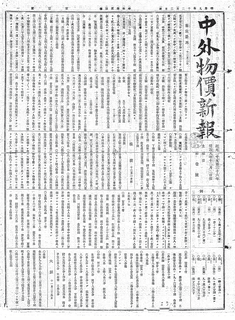 The Nikkei, also known as The Nihon Keizai Shimbun, is the flagship publication of Nikkei, Inc. and the world's largest financial newspaper, with a daily circulation exceeding 1.73 million copies. The Nikkei 225, a stock market index for the Tokyo Stock Exchange, has been calculated by the newspaper since 1950. 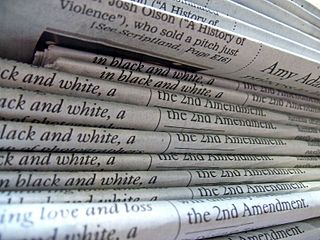 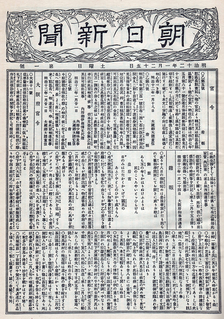 The Asahi Shimbun is one of the four largest newspapers in Japan. Founded in 1879, it is also one of the oldest newspapers in Japan and Asia, and is considered a newspaper of record for Japan. Its circulation, which was 4.57 million for its morning edition and 1.33 million for its evening edition as of July 2021, was second behind that of the Yomiuri Shimbun. By print circulation, it is the third largest newspaper in the world behind the Yomiuri, though its digital size trails that of many global newspapers including The New York Times.

JOIX-DTV, branded as Yomiuri TV, is the Kansai region flagship station of the Nippon News Network and the Nippon Television Network System, owned by the Yomiuri Telecasting Corporation subsidiary of the eponymous Yomiuri Shimbun Holdings, Japan's largest media conglomerate; Yomiuri TV forms part of Yomiuri's main television broadcasting arm alongside Kantō region flagship Nippon TV, which owns a 15.89% share in the company. Founded as New Osaka Television Co. on February 13, 1958, and renamed Yomiuri Telecasting Corporation on August 1, the station started broadcasting on August 28 as the first TV station to be affiliated with Nippon Television Network Corporation. Its studios are located in the Osaka Business Park district of Osaka. 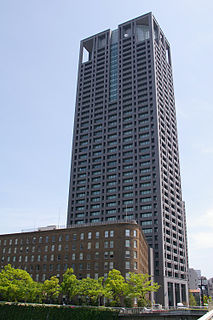 The Kansai Electric Power Company, Incorporated, also known as Kanden (関電), is an electric utility with its operational area of Kansai region, Japan.

Japanese newspapers, similar to their worldwide counterparts, run the gamut from general news-oriented papers to special-interest newspapers devoted to economics, sports, literature, industry, and trade. Newspapers are circulated either nationally, by region, by each prefecture, or by each city. Some newspapers publish as often as two times a day while others publish weekly, monthly, quarterly, or even yearly. The five leading national daily newspapers in Japan are the Asahi Shimbun, Mainichi Shimbun, the Yomiuri Shimbun, Sankei Shimbun and the Nikkei Shimbun. The first two are generally considered liberal/left-leaning while the latter three are considered conservative/right-leaning. The most popular national daily English-language newspaper in Japan is The Japan Times. 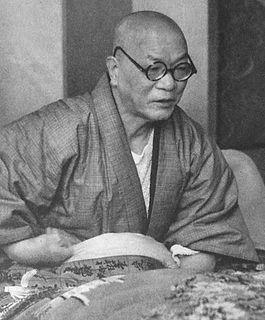 Matsutarō Shōriki was a Japanese media mogul and politician. He owned the Yomiuri Shimbun newspaper, the main mouthpiece for the military dictatorship during the war, after the war it gained Japan’s highest readership while openly distributing nationalistic and pro-American agendas.

Tōru Shōriki was a Japanese businessman and the owner of The Yomiuri Group, the parent of Yomiuri Shimbun Holdings. He was the eldest son of its previous owner, Matsutarō Shōriki.

Hirofumi Yoshimura is a Japanese politician currently serving as the Governor of Osaka Prefecture. He assumed office in April 2019. He has been described as a conservative.

The Yomiuri Shimbun Building (読売新聞ビル) is a skyscraper located in Ōtemachi, Tokyo, Japan.

Hiroshi Hasebe is the professional pseudonym of Makoto Matsuno, a Japanese theatre critic and professor at Tokyo University of the Arts.

Wikimedia Commons has media related to Yomiuri Shimbun .
This page is based on this Wikipedia article
Text is available under the CC BY-SA 4.0 license; additional terms may apply.
Images, videos and audio are available under their respective licenses.