Yoo Jae-suk (Korean : 유재석; Korean pronunciation:  [jud͡ʑεsʌk̚] or [ju] [t͡ɕεsʌk̚] ; born on August 14, 1972), is a South Korean comedian, host and television personality currently signed to FNC Entertainment. He has hosted several variety television shows in South Korea, including Infinite Challenge , Running Man , and Happy Together . Known for his quick wit and appeal across a wide range of demographics, Yoo has established himself as one of South Korea's top comedians and TV personalities, arguably the most well-known and popular celebrity in South Korea. [1] [2]

Yoo's television debut was on the KBS Comedian Festival (for college students) in 1991, where he performed a parody of a commercial with Choi Seung-gyung. His dancing to a cover of the song "Step by Step" by New Kids on the Block was another early memorable moment. [1] In 2002, after nine years as a relatively unknown comedian, thanks to a recommendation by Choi Jin-sil, he hosted the program Live and Enjoy Together. [4] He then rose to prominence when he co-hosted a program called The Crash of MCs with Kang Ho-dong, Lee Hwi-jae, and Kim Han-seok.

His first Grand Prize award was for the talk show Happy Together Friends . [5]

Yoo later hosted the show X-Man , which soon grew to be one of the most popular and highest rated shows in South Korea. During that time, Yoo became increasingly popular and many programs began to nickname him "the nation's MC". He went on to host various shows, including New X-Man, Old TV, and Haja! Go! (Let's Do It) for SBS, but these were all soon canceled due to low ratings on Sunday evenings. However, X-Man has found success in international syndication, and Yoo gained popularity among Korean Wave fans. [6]

Yoo was a part of the cast of the top-rated comedy variety program Infinite Challenge . He had been the host-in-chief since 2005 and was one of the program's founding members.

Despite low ratings during its premiere, the show went on to become one of the most popular and influential variety programs in Korea. Dubbed the "national variety show" in Korea, [7] Infinite Challenge became the forerunner of many programs that used a similar format. [8] Since December 2, 2006, the program has received the highest ratings of prime-time lineups for Saturday evening. [9]

Yoo revealed his love for the program during 1-on-1 talk with fellow co-host, Jeong Hyeong-don, on a "Pause" special (S04E300) that aired on October 20, 2012. He said, "I think my life on television and variety shows will be tied to the fate of Infinite Challenge... When will we ever get to do another program like this? No matter how hard you try, it's going to be impossible to do another show like this." [10]

Yoo also co-hosts Come to Play with Kim Won-hee [11] and Happy Together Season 3 . In particular, Happy Together is one of the longest running talk shows in Korea and has consistently earned high ratings. [12]

Yoo became the main host of Family Outing as part of SBS's Good Sunday lineup. Together with Lee Hyori, Yoon Jong-shin, Kim Su-ro, Lee Chun-hee, Kang Dae-sung, Park Ye-jin, and Kim Jong-kook (since episode 19), they made up the "family" (cast members) of the show. Family Outing became one of the top-rated shows in Korea, consistently achieving the highest ratings for the Sunday mid-afternoon time-slot, and it gained popularity among Hallyu fans. [13]

Since July 11, 2010, Yoo has hosted the urban action variety Running Man together with fellow Infinite Challenge member Haha, fellow Family Outing member Kim Jong-kook, other entertainers such as Ji Suk-jin, Leessang's Gary (who left since episode 324 to focus on his music career), Song Ji-hyo, Lee Kwang-soo, Song Joong-ki (who left since episode 41 to focus on his acting career), Lizzy of After School (who left for unknown reasons), Jeon So-min and Yang Se-chan (both joined since episode 346). Although the program did not have a good start in ratings, it later became very popular and has held a consistent international fanbase to this day. [14]

After the end of Infinite Challenge , Yoo’s biggest show, in March 2018, articles were being written about how Yoo was in a crisis and past his prime. Though with himself still topping popularity charts, new shows of his such as Laborhood on Hire and You Quiz on the Block while finding moderate success and having favourable reviews, were not able to fill the shoes of Infinite Challenge. [15]

Hangout with Yoo [16] [17] was the eagerly anticipated new project with the partnership of the power duo from Infinite Challenge. The main driving forces for the success of ‘Infinite Challenge’ are main program director Kim Tae-ho and Yoo, as the main host. Unfortunately, initial reactions to the show were not ideal and ratings were plummeting, leaving many ‘Infinite Challenge’ fans disappointed.

After the disappointing start a few episodes in, the show began working on a new project. The project was to have Yoo learn to play a simple beat on a drum set. The recorded sample was then passed down from musician to musician in which each musician will add their own accompaniment in, and ultimately end up with a complete song. With the start of this project, ratings and reviews for the show were picking up. [18]

With the show slowly picking up in popularity, [19] [20] the media labelled the show as Yoo’s 2nd heyday with Yoo’s debut as a rookie trot singer, Yoo San-seul for another of the show’s project. Yoo released a three-track trot album, Bbong For Yoo. [21] [22]

From 2015 to 2016, Yoo hosted the program Two Yoo Project Sugar Man together with You Hee-yeol. The program focuses on current popular artists remaking hit songs from singers who have disappeared from the public eye. [23] The show returned again for a second season in 2018 with Yoo co-hosting alongside Yoo Hee-yeol, Joy (Red Velvet), and Park Na-rae. [24] The show then returned again for a third season in late 2019 with Yoo co-hosting alongside You Hee-yeol, Kim Eana and Heize. [25]

In 2012, Yoo appeared in the music video for Psy's hit single "Gangnam Style". In the video, he reprises the retro disco dancing character he created for the mock-band "Sagging Snail" in Infinite Challenge's West Coast Highway Music Festival special, in which Psy also appeared. Following his appearance, Yoo became known worldwide as the "yellow suit guy". [29] He also appeared in Psy's follow-up single, "Gentleman". [30] In 2015, Yoo collaborated with JYP in Infinite Challenge. On July 15, 2015, Yoo signed an exclusive contract with FNC Entertainment after having been without an agency for about five years. [31]

In 2016, Yoo collaborated with EXO for the SM Station single "Dancing King", which was also a collaboration for Infinite Challenge. [32] He performed with them at EXO's EXO Planet #3 - EXO'rDIUM concert in Bangkok. [33]

Known for his exemplary image, Yoo has consistently been picked as a role model by fellow entertainers, as well as the citizens of Korea. [42] He makes donations regularly to several causes, and has participated in philanthropic acts. [43] [44] [45]

Yoo is the first television host to have his own wax figure, currently displayed at the Grevin Seoul Museum. [46]

Music credits adapted from the Korea Music Copyright Association. As of 23 December 2019 [update] . [73] 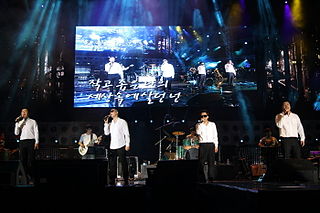 Dynamic Duo is a South Korean hip hop duo that consists of rappers Choiza and Gaeko. They rose to fame with their 2004 debut album, Taxi Driver, which became the best-selling Korean hip hop album ever. They are signed to Amoeba Culture, a hip hop record label that they founded in 2006.

Ha Dong-hoon, better known by his stage name Haha (Korean: 하하), is a South Korea singer, variety show host and member of RGP. He is best known for being in the sitcom, Nonstop and for co-hosting two popular variety programs, MBC's Infinite Challenge and SBS's Running Man. He has also hosted his own show, titled "Ya Man TV" on Mnet in 2015.

Jung Hyung-don is a South Korean comedian and television host. He is best known for his roles on the variety shows Infinite Challenge and Weekly Idol.

Kim Jung-yoo, better known as MC Sniper, is a South Korean rapper. He is known for writing controversial lyrics that challenge social injustice and mainstream society. He was a contestant on Show Me the Money and a producer on both seasons of Tribe of Hip Hop. He released his first album, So Sniper..., on May 17, 2002. 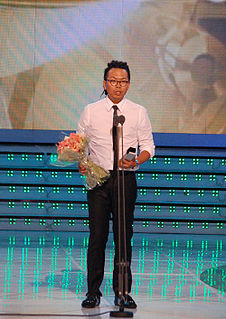 10 cm is a South Korean musical act. The band originally consisted of two members: Kwon Jung-yeol and Yoon Cheol-jong. The name of the band, 10 cm, refers to height difference of the two core members. Since its debut in 2010 with the release of 10cm The First EP, the band has been a rookie among other Korean bands. The band won "This Year's Discovery Award" at the 2010 Mnet Asian Music Awards, and "Best Pop Song Award" at the 2011 Korean Music Awards. 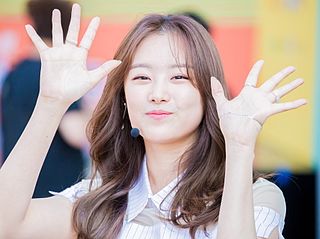 Song Ji-eun,, better known mononymously as Jieun, is a South Korean singer best known as a member of the South Korean girl group Secret. Aside from her group's activities, she has released several solo songs and participated in various OSTs. In 2011, her second single, "Going Crazy" featuring Bang Yong-guk, went to become her first number one single on the Gaon Chart as a solo artist.

Jung Eun-ji is a South Korean singer, songwriter, actress and voice actress. She is best known as a member of the South Korean girl group Apink. Jung made her acting debut in the coming-of-age drama, Reply 1997 in 2012. She has since had roles in That Winter, the Wind Blows (2013), Trot Lovers (2014), Cheer Up! (2015), and Untouchable (2017) in addition to various voice acting roles. She released her debut solo album, Dream, in 2016. 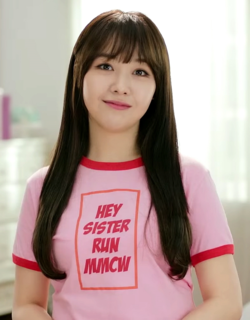 Bang Min-ah, better known by the mononym Minah, is a South Korean singer and actress. She debuted as a member of the girl group Girl's Day in 2010 and released her first solo album, I Am a Woman Too, in 2015. She has acted in various films and television series, including lead roles in Beautiful Gong Shim (2016) and My Absolute Boyfriend (2019). 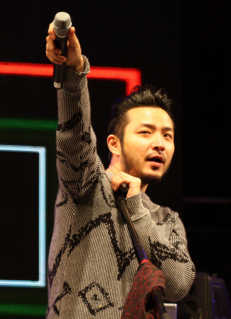 Kim Jin-tae, better known by his stage name Verbal Jint, is a South Korean musician, rapper and record producer who is known for his groundbreaking innovations in Korean hip hop rhyme schemes. He established himself as one of South Korea's most popular underground rappers of the 2000s before achieving mainstream success. He is signed to the hip hop record label Brand New Music, under which he runs his own independent label, Otherside.

Choi Dong-hoon, better known by the stage name Primary, is a South Korean hip hop musician and record producer. He was signed under Amoeba Culture. 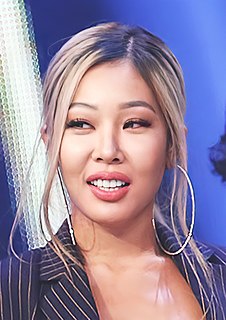 Jessica Hyun-ju Ho, better known by her stage name Jessi, is a Korean-American rapper, singer, and songwriter based in South Korea. She was born in New York, raised in New Jersey, and moved to South Korea at the age of 15.

Kim Se-jeong, better known by the mononym Sejeong, is a South Korean singer and actress signed under Jellyfish Entertainment. She is best known as the runner-up contestant in Produce 101, a former member of the girl group I.O.I, and as a member of Gugudan and its subgroup Gugudan SeMiNa. She was a co-host of the variety show Talents for Sale in 2016. She also played the leading role in the teen drama School 2017 She has been a cast member of Busted! since 2018. And in the 2019 mystery romantic-comedy I Wanna Hear Your Song.

December was a South Korean duo formed by CS Happy Entertainment in 2009. They debuted on October 27, 2009 with Dear My Lover.

Choi Kwang-ryul, known by the stage name Kanto, is a South Korean rapper and composer. He debuted as a soloist with his debut single, What You Want, on October 25, 2013. He later debuted as a member of South Korean hip hop and R&B quartet Troy in September 2014. He released his first EP, 14216, on September 27, 2016.

Jo Woo-chan, is a South Korean rapper. He was a contestant on Show Me the Money 6. He released his first collaborative single, "OGZ", on January 5, 2018. 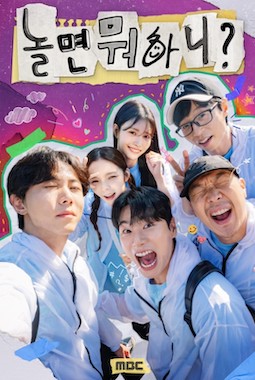