Last updated May 01, 2021
Not to be confused with Yorktown.
For other uses, see Yorkton (disambiguation).
City in Saskatchewan, Canada

Yorkton was founded in 1882 and incorporated as a city in 1928. The city is bordered by the rural municipalities of Orkney to the north, west, and south, and Wallace on the east.

In 1882 a group of businessmen and investors formed the York Farmers Colonization Company. Authorized to issue up to $300,000 in debentures and lenient government credit terms on land purchases encouraged company representatives to visit the District of Assiniboia of the North-West Territories with the intent to view some crown land available near the Manitoba border. They were impressed with what they saw and the group purchased portions of 6 townships near the Little Whitesand River (now Yorkton Creek) for the purpose of settlement and to establish a centre for trade there. [8] This centre would become known as York Colony. [9]

The company founded the settlers' colony on the banks of the Little Whitesand River where lots were given freely to settlers who purchased land from them. The colony remained at its site until 1889. It was originally located at PT SE 1/4 13-26-4 W2M. [10]

In 1889 the rail line was extended to the Yorkton area. It was at this time the colony townsite relocated alongside the new rail line. [11]

Yorkton is located in the aspen parkland ecosystem. [12] The terrain is mainly one of agriculture and there is no forestry industry. [13] It is also in an area of black calcareous chernozemic soils. [12] [13] The Yorkton area was located on the edge of an area of a maximum glacial lake. [13] The quaternary geology has left the area as a moraine plain consisting of glacial deposits. [12] The bedrock geology is the pembina member of Vermillion River Formation and Riding Mountain Formation. Yorkton is located in the physiographic region of the Quill Lake-Yorkton Plain region of the Saskatchewan Plains Region. [13]

Yorkton has a humid continental climate (Köppen climate classification Dfb ), with extreme seasonal temperatures. It has warm summers and cold winters, with the average daily temperatures ranging from −17.9 °C (−0.2 °F) in January to 17.8 °C (64.0 °F) in July.

The first settlers to the Yorkton colony were English from Eastern Ontario and Great Britain. 6 miles (9.7 km) west were Scottish settlers at the settlement of Orkney. [21] A significant number of residents are also descended from immigrants from Ukraine who came in the early 20th century.

The city of Yorkton, the Rural Municipality of Orkney No. 244, the town of Springside and the village of Ebenezer form the census agglomeration (CA) of Yorkton, Saskatchewan with a combined 2011 population of 18,238 on a land area of 843.37 square kilometres. [27]

The Yorkton Gallagher Centre is an entertainment complex constructed in 1977 by the civic government and the Yorkton Exhibition Association. The centre includes an arena, curling rink, conference rooms and an indoor swimming pool. [29] Until 2005, the facility was called the Parkland Agriplex. In the early 1900s an older Agriplex building was located on the fair grounds adjacent to the Gallagher Centre. [30]

Yorkton is home to a branch of the Saskatchewan Western Development Museum, which houses a number of exhibits depicting pioneer life in the town and on the surrounding prairie. The museum includes an early pioneer log home and an extensive outdoor exhibit of agricultural machinery, including early tractors and steam engines. [21]

The Yorkton Terriers are a team in the Saskatchewan Junior Hockey League. The Yorkton Rawtec Maulers are a Midget AAA ice hockey team and they are a member of the SMAAAHL. The teams play their games in the 2,300 seat Farrell Agencies Arena in the Yorkton Gallagher Centre [34] [35]

Yorkton Cardinals are a baseball team playing in the Western Canadian Baseball League. [36]

The Yorkton Bulldogs are a retired box lacrosse team formed in 2003. They are a member of the Prairie Gold Lacrosse League. [37]

The current mayor as of 2020 is Mitch Hippsley. He is serving with councillors Randy Goulden, Quinn Haider, Dustin Brears, Darcy Zaharia, Chris Wyatt, and Ken Chyz. [38]

The city is located in the Provincial Electoral District of Yorkton. [39] This riding is served in the Legislative Assembly of Saskatchewan by Saskatchewan Party MLA Greg Ottenbreit. [40]

The federal constituency of Yorkton—Melville [41] is represented in the House of Commons of Canada by Cathay Wagantall of the Conservative Party of Canada.

From 1968 to 1993, Yorkton was represented federally by New Democratic Party MP Lorne Nystrom who at his first election win was the youngest person to be elected to the Canadian Parliament.

Yorkton established its first hospital in 1902, and this was followed by a maternity care home which lasted a couple of decades. [12] The original hospital was converted into a residential apartment, which in 2014 suffered a large fire which engulfed the entire building. [42] The current hospital, the Yorkton Regional Health Centre, is located on Bradbrooke Drive and is part of the Sunrise Health Region. [43]

During the Second World War an airport was built 2.8 nautical miles (5.2 km; 3.2 mi) north of Yorkton for the Royal Canadian Air Force's No. 11 Service Flying Training School. It is now operated as the Yorkton Municipal Airport ( IATA : YQV, ICAO : CYQV). [44] [45]

Yorkton is located at the intersection of Hwy 52, Hwy 10, Hwy 9 and The Yellowhead which is part of the Trans Canada Highway [46]

Parkland College has campuses in Yorkton.

Sacred Heart High School was founded by the Sisters Servants of Mary Immaculate, and the school celebrated its 75th Anniversary in 1991. [48] Dream Builders is an alternative education program offering grades 6 through 12 with a work experience component. [48] Yorkton Regional High School opened November 10, 1967 offering grades 9 to 12. [49]

The Royal Canadian Air Force Station Yorkton (ADC ID: C-51) was a Long Range Radar (LRR) and Ground Air Transmitter Receiver (GATR) facility of the Pinetree Line. The site was SAGE compatible from day one. The facility which was in use during the Cold War was renamed CFS Yorkton (Canadian Forces Station) in 1967. The station located near Yorkton was operational from 1963–1986.

Cable television services are supplied by Access Communications. Access is a Saskatchewan-owned not-for-profit cooperative established in 1974. It also supplies home phone and internet service to the community. [60]

Sasktel provides max tv services on both DSL and Fiber to the prem. Sasktel is owned by the provincial government to serve the people of Saskatchewan with tel, internet and tv services.

Yorkton was previously served by CKOS-TV channel 5, a private CBC Television outlet; formerly a sister station of CICC, it became an owned-and-operated repeater of CBKT in 2002, before closing down with the rest of CBC's repeater network in 2012.

Melville is a small city in the east-central portion of Saskatchewan, Canada. The city is 145 kilometres (90 mi) northeast of the provincial capital of Regina and 45 kilometres (28 mi) southwest of Yorkton. Melville is bordered by the rural municipalities of Cana No. 214 and Stanley No. 215. Its population at the 2016 census was 4,562, making it Saskatchewan's smallest city. It is also home of hockey's Melville Millionaires, who compete in the Saskatchewan Junior Hockey League, and baseball's Melville Millionaires, who compete in the Western Canadian Baseball League. 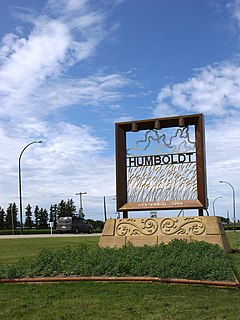 Humboldt is a city in the province of Saskatchewan, Canada. It is located 113 km east of Saskatoon at the junction of Highway 5 and Highway 20. The city is surrounded by the Rural Municipality of Humboldt No. 370. 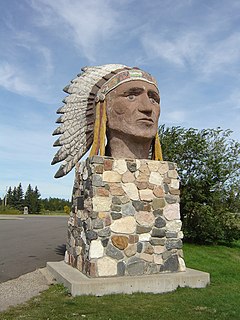 Indian Head is a town in southeast Saskatchewan, Canada, 69 kilometres (43 mi) east of Regina on the Trans-Canada Highway. It "had its beginnings in 1882 as the first settlers, mainly of Scottish origin, pushed into the area in advance of the railroad, most traveling by ox-cart from Brandon." "Indian" refers to Aboriginal Canadians. The town is known for its federally operated experimental farm and tree nursery, which has produced and distributed seedlings for shelter belts since 1901. For many years the program was run by the Prairie Farm Rehabilitation Administration (PFRA).

Sturgis is a town of 620 people in east central Saskatchewan, Canada. The Town of Sturgis is 95 km north of Yorkton on Highway 9. It is located in the Assiniboine river valley near the lakes and woods region of the province.

Assiniboia is a town in Southern Saskatchewan, Canada. It is located 110 km (68 mi) south-southwest of Moose Jaw beside Highway 2 and Highway 13. 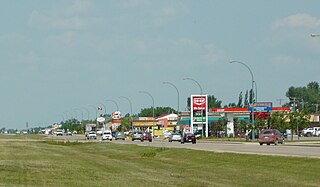 Martensville is a city located in Saskatchewan, Canada, just 8 kilometres (5.0 mi) north of Saskatoon, and 14 kilometres (8.7 mi) southwest of Clarkboro Ferry which crosses the South Saskatchewan River. It is a bedroom community of Saskatoon. It is surrounded by the Rural Municipality of Corman Park No. 344. The community is served by the Saskatoon/Richter Field Aerodrome located immediately west of the city across Highway 12. 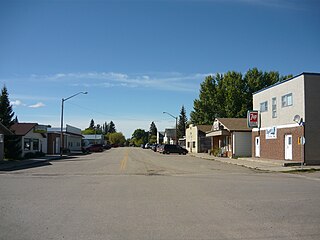 Langham is a town in Saskatchewan, Canada. It is located on Highway 16, 35 kilometres northwest of the city of Saskatoon. The 2011 census reported a population of 1,290, with 489 homes in the community.

Blaine Lake is a town in central Saskatchewan, Canada. It is located 85 km north of Saskatoon, 104 km southwest of Prince Albert and 104 km east of North Battleford at the junction of Highway 12 and Highway 40. Nearby are the urban centres of Shellbrook and Rosthern. Blaine Lake is considered to be the "Gateway to the Northern Lakes" due to its proximity to fishing, hunting and camping sites, as well as its convenient location at a junction of two highways.

Wynyard is a town in eastern Saskatchewan, Canada, 132 km west of Yorkton and 190 km east of Saskatoon. Wynyard is in but not part of the rural municipality of Big Quill No. 308. It is located on the Yellowhead Highway just south of Big Quill Lake.

Esterhazy is a town in the southeastern portion of the province of Saskatchewan, Canada, located 83 km southeast of Yorkton along Highways 22 and 80. The town is located within the rural municipality of Fertile Belt No. 183.

Kelvington is a town of 864 residents in the rural municipality of Kelvington No. 366, in the Canadian province of Saskatchewan. Kelvington is located at the intersection of Highway 38 and Highway 49. It is east of Saskatoon. 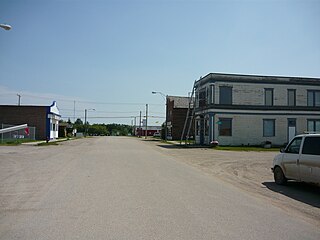 Dundurn is a town of 647 residents in the rural municipality of Dundurn No. 314, in the Canadian province of Saskatchewan. Dundurn is located on Highway 11 or Louis Riel Trail in central Saskatchewan, about 42 km south of Saskatoon. As well as being an agricultural town, it is also a bedroom community for both Camp Dundurn and Saskatoon.

Rose Valley is a town in the rural municipality of Ponass Lake No. 367, in the Canadian province of Saskatchewan. Rose Valley is located at the intersection of Highway 35 and Primary Grid 746 in east-central Saskatchewan. Wheat and dairying are the main economic industries in this area. 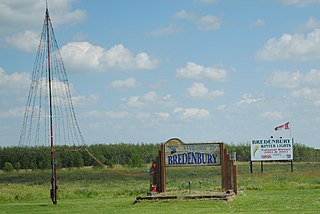 Bredenbury is a town, in the rural municipality of Saltcoats No. 213, in the Canadian province of Saskatchewan. Bredenbury is located on Highway 16 in eastern Saskatchewan. As of the 2016 Canadian Census, the population of Bredenbury was 372. The main industries in the area are farming as well as potash mining near Esterhazy. The community is known in the area for its enthusiastic Christmas light displays which have won national awards. 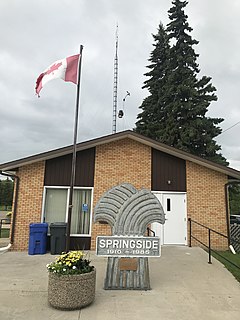 Springside is a town in Saskatchewan, Canada within Rural Municipality of Orkney No. 244. It is located about 24km northwest of the city of Yorkton along the Yellowhead Highway.

Milestone is a town in southeast Saskatchewan, Canada, on Saskatchewan Highway 39. The town was named after C. W. Milestone in 1893. The town serves as a service centre for the neighbouring countryside with the area's economy dominated by agriculture.