The Young Conservatives (Czech : Mladí konzervativci, MK CZ) is a right-wing political youth organisation in the Czech Republic. It is the youth wing of the Civic Democratic Party (ODS), a centre-right political party, and shares that party's conservative and economically liberal ideology.

The founding congress was held on 8 December 1991 as a result of previous preparations through Charter of Young Conservatives by a group of students at the University of Technology in Brno and Law Students' Association "Všehrd" from Faculty of Law at the Charles University. First Chairman of the Young Conservatives we elected David Částek.

Original ideological course of the Young Conservatives was given by the Charter of Young Conservatives following basic conservative principles: Democracy, Nationhood, Rule of Law, Liberty, Free Market, Tradition, Private Ownership, Family and Morality. Through its history Young Conservatives were closely cooperating with the Civic Democratic Party (ODS). Organization defines its approach towards the European Union as Eurorealistic or Euroskeptic.

The Young Conservatives organize wide range of events from meetings with local or national politicians to elections campaigns and international events. The most significant events since 1991 are listed below:

Campaign in the Republic of Ireland for an Irish 'no' vote in the 2002 referendum on the Treaty of Nice.

Below are listed as follows Chairmen of the Young Conservatives.

The European Young Conservatives (EYC) is a grouping of youth wings of conservative and centre-right political parties in Europe.

Petr Mach is a Czech economist and former Member of the European Parliament. He is the founder of the Party of Free Citizens which he led until 2017 when he was replaced by Tomáš Pajonk.

Petr Fiala is a Czech politician, political scientist and university professor who has been leader of the Civic Democratic Party (ODS) since 2014. He has served as a member of the Chamber of Deputies since 2013. From 2012 to 2013 Fiala was Minister of Education, Youth and Sports in the Cabinet of Prime Minister Petr Nečas.

Pravý Břeh is a conservative think tank based in the Czech Republic. It is a formed by a group of intellectuals with an objective to think, propose and implement reforms that are in par with the ideals of the right wing thinkers. The name right bank is coined taking into consideration the objectives of right wing, that are in contrast with the objectives of the left wing. It produces an eponymous online newspaper. 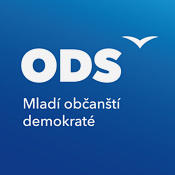