Youyi County (simplified Chinese :友谊县; traditional Chinese :友誼縣; pinyin :Yǒuyì Xiàn; literally: "friendship") is a county of eastern Heilongjiang province, People's Republic of China. It is under the jurisdiction of the prefecture-level city of Shuangyashan.

A Friendship Store is a state-run store in the People's Republic of China (PRC), which initially sold exclusively to foreign visitors and tourists, diplomats, and government officials, but now has no restrictions on customers.

Pingxiang is a county-level city under the administration of the prefecture-level city of Chongzuo, in the southwest of the Guangxi Zhuang Autonomous Region, China.

Youyi Road is a station on the Shanghai Metro Line 3. It is part of the northern extension of that line from Jiangwan Town to North Jiangyang Road that opened on 18 December 2006.

The Youyi Bridge is a bridge on the Karakoram Highway at Thakot in Khyber-Pakhtunkhwa province of Pakistan. Its inauguration was in August 27, 2004.

Fuyu is a county of western Heilongjiang province, People's Republic of China, under the administration of Qiqihar City, the downtown of which is 65 kilometres (40 mi) to the southwest. Various economic crops and the milk are produced in the fertile land. The county has an area of 4,335 square kilometres (1,674 sq mi), and a population of 300,000 inhabitants. 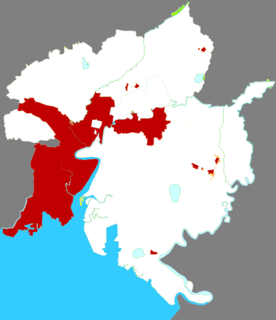 Xinglongtai District is a district under the administration of the city of Panjin, Liaoning province, People's Republic of China. It has a total area of 194 square kilometres (75 sq mi), and a population of approximately 370,000 people. The district's postal code is 124010, and the district government is located on Shiyou Street.

Youyi may refer to the following locations: 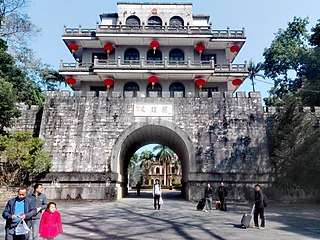 Friendship Pass, also commonly known by its older name Ải Nam Quan (隘南關), is a pass near the border between China's Guangxi and Vietnam's Lạng Sơn Province, on the Chinese side of the border. Vietnamese National Route 1A starts near to this pass, which lies less than 5 km north of the town of Đồng Đăng in Lạng Sơn Province, ending in Năm Căn in Cà Mau Province. China National Highway 322 runs from here to Guangxi Province and Hunan Province. This is one of the busiest border trading points of Vietnam. 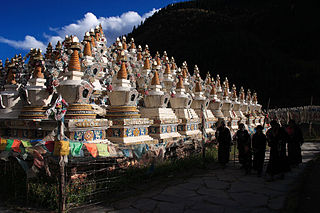 Xinlong County is a county in the west of Sichuan Province, China. It is under the administration of the Garzê Tibetan Autonomous Prefecture.

Qiaoxi District is a district of Shijiazhuang, the capital of Hebei province, China.

Lunan District is a district of the city of Tangshan, Hebei province, China. 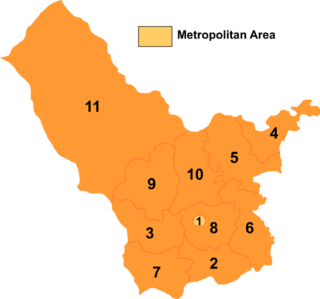 Chahar Right Middle Banner is a banner of Inner Mongolia, People's Republic of China, bordered by Chahar Right Back Banner to the east, Zhuozi County to the south, and Siziwang Banner to the northwest. It is under the administration of Ulaan Chab City.

Huangpu Coach Terminal Station is a future terminus on Line 5 of the Guangzhou Metro in Guangzhou City, Guangdong Province, China. It will be located under Chuangye Road(Chinese: 创业路) at the west of Youyi Road, Guangzhou Economic and Technological Development Zone in the Luogang District.

Sanjiazi (Chinese: 三家子; pinyin: Sānjiāzi; is a village or Ilanbotokso in Youyi Daur, Manchu, and Kirghiz Ethnic Township, Fuyu County, Heilongjiang, China. The village is about 22 km southwest of the administrative center of Fuyu, and about 6 km west of the main road from Qiqihar. 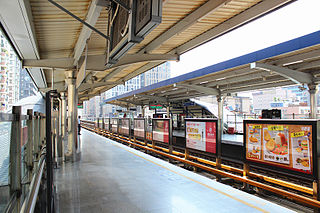 Youyi Road Station, is a station of Line 1 of Wuhan Metro. It entered revenue service along with the completion of Line 1, Phase 1 on July 28, 2004. It is located in Jianghan District.