Yu Gam-dong (Hangul:유감동;Hanja:兪甘同) (died after 1428),was a notable Gisaeng,dancer,writer,artist,and poet who lived during the Korean Joseon Dynasty of the 15th century. Her Gisaeng name was Gamdong.

In her early years she was arranged to marry Choi Jung-ki (최중기,崔仲基),a county governor and head of a myeon. [2]

She was raped by Kim Yeo-dal (김여달,金如達) and divorced,becoming a Gisaeng. [3] As a Gisaeng she was active as a dancer and poet. She wrote poetry and painted pictures,but most of her work has been destroyed or not been preserved. [4]

As a divorced woman,she became known for her love life,having numerous male lovers,something extremely controversial in Korean society at that time. [2] Reportedly,she had 39 lovers,among them Public Works Minister Seong Dal-saeng,secretary of the Office of Inspector-General Yi Hyo-rye,a craftsman as well as her husband's nephew and brother-in-law. [5] This was technically adultery,as she was living estranged from her husband but not formally divorced from him. In 1428,in accordance with the law,she was therefore punished for adultery by being flogged and made a slave for a government office in a remote region. [5]

There was at this time an increasing severity in the persecution of women who committed adultery,and particularly noblewomen such as Yu Gam-dong,Geumeumdong and Dongja,both noblewomen who committed adultery with male relatives and where punished,and above all the noblewoman Eoeuludong,who was executed in 1480 after a famous scandal in which she had committed adultery with multiple men including royal relatives,court officials and slaves,and these cases eventually resulted in the death penalty formally introduced for female adultery by King Jungjong in 1513. [5]

Sejong the Great was the fourth king of the Joseon dynasty of Korea. He was the third son of King Taejong from Queen Wongyeong,and was designated as Crown Prince after his older brother,Grand Prince Yangnyeong,was stripped of his title. He ascended to the throne in 1418,but during the first four years of his reign,Taejong governed as regent and executed Sejong's father-in-law,Sim On,and his close associates. 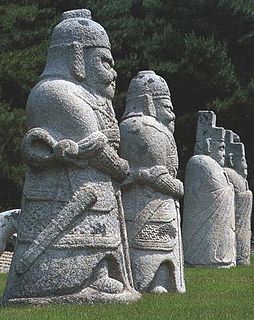 Taejong of Joseon was the third monarch of the Korean Joseon Dynasty and the father of King Sejong the Great. 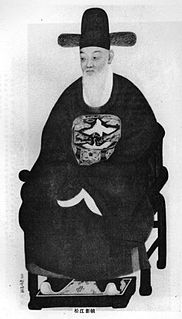 Jeong Cheol was a Korean statesman and poet. He used the pen-names Gyeham (계함) and Songgang (송강),and studied under Kim Yunjae at Hwanbyeokdang. He was expelled by the Easterners. He was from the Yeonil Jeong clan.

Munjong of Joseon was the fifth king of the Joseon dynasty,who ruled Korea from 1450 to 1452. He was the eldest son of King Sejong and succeeded him in 1450,but died of disease two years later. He was succeeded by his son,Danjong of Joseon.

Sejo of Joseon was the seventh king of the Joseon Dynasty of Korea. He was the son of King Sejong and brother of Munjong of Joseon and uncle of Danjong of Joseon,against whom he led a coup d'état to become king himself in 1455. 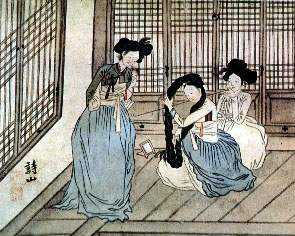 Kisaeng,also called ginyeo,were women from outcast or slave families who were trained to be courtesans,providing artistic entertainment and conversation to men of upper class. First appearing in Goryeo,kisaeng were the government's legal entertainers,required to perform various functions for the state. Many were employed at court,but they were also spread throughout the country. They were carefully trained and frequently accomplished in the fine arts,poetry,and prose,and although they were of low social class,they were respected as educated artists. Aside from entertainment,their roles included medical care and needlework.

The history of the kisaeng covers the entire second millennium,from the Goryeo dynasty to modern South Korea. The kisaeng system first emerged in the early Goryeo period,and was at its height in the middle Joseon Dynasty. The kisaeng were contribute to entertain others,such as the Yangbans and kings. although some kisaeng also held positions of importance in the court or in literary culture. A strange silence hangs over the official histories of Korea when it comes to the kisaeng. They enter only occasionally into official records such as the Goryeosa or Joseon Wangjo Sillok. Yet references to kisaeng are quite widespread in the "anecdotal histories" of later Joseon,and Silhak thinkers such as Yi Ik and Dasan gave some thought to their role and station in society. Even today,many formal histories of Korea pay little or no heed to the story of the kisaeng. For example,Ki-baek Lee's New History of Korea does not contain a single reference to the kisaeng.

Queen Soheon,of the Cheongsong Sim clan,was a posthumous name bestowed to the wife and queen consort of Yi Do,King Sejong and the mother of Yi Hyang,King Munjong and Yi Yu,King Sejo. She was Queen consort of Joseon from 1418 until her death in 1446 and honoured as Queen Gong (공비).

Hwang Jini is a Korean drama broadcast on KBS2 in 2006. The series was based on the tumultuous life of Hwang Jini,who lived in 16th-century Joseon and became the most famous gisaeng in Korean history. Lead actress Ha Ji-won won the Grand Prize (Daesang) at the 2006 KBS Drama Awards for her performance.

The Great Merchant is a 2010 South Korean historical drama starring Lee Mi-yeon,Han Jae-suk,Park Sol-mi,Ha Seok-jin,and Go Doo-shim. It aired on KBS1 from March 6 to June 13,2010 on Saturdays and Sundays at 20:40 for 30 episodes.

Grand Prince Yangnyeong was a former Crown Prince of the Joseon Dynasty of Korea. He was the first son and fourth child of King Taejong and his wife,Queen Wongyeong. Yangnyeong was the elder brother of Sejong the Great,and an ancestor of Syngman Rhee,an independence activist and the first President of South Korea.

Kim Ja-jeom was a Korean scholar-official of the Joseon Dynasty period. He was one of the disciples of Seong Hon and was came from the Andong Kim clan.

Eoudong or Uhwudong,also known as Eoeuludong,née Park,was a Korean dancer,writer,artist,and poet from a noble family in the Joseon Dynasty of the 15th century. Most of her work has not been preserved.

Princess Yi Gu-ji was a Joseon Dynasty princess,writer,artist,and poet. She was forced to commit suicide after it was discovered that she had cohabited with a slave after being widowed. 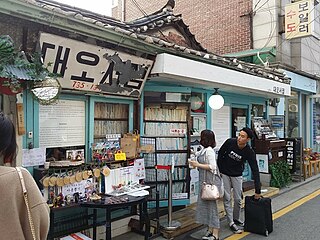 Seochon (서촌) is one of the oldest neighborhoods of Jongno-gu in northern Seoul,South Korea. It translates as "West village" or "Western village" as it is west of the Gyeongbok Palace. It is also thought that the name could have derived from Mt Inwangsan as the mountain used to be called "Seosan" or "old mountain in the west." Seochon is traditionally associated with the Joseon dynasty and Korean literature.

Crown Princess Hwi of the Andong Kim clan (1410–1429),also known as Deposed Consort Kim,was the first wife of Yi Hyang,Munjong of Joseon,while he was still the Crown Prince,but was demoted to commoner and thrown out of the palace after she used witchcraft to gain her husband's affection. 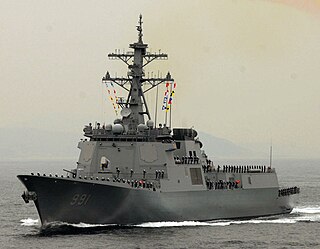 ROKS Sejong the Great (DDG-991) is the lead ship of the her class of guided missile destroyer built for the Republic of Korea Navy. She was the first Aegis-built destroyer of the service and was named after the fourth king of the Joseon dynasty of Korea,Sejong the Great.

Royal Consort Jeong of the Juksan An clan or formally called as Royal Grand Consort An during the three reign kings:U,Chang and Gongyang's reign,was a Korean Royal Consort and the 4th wife of King Gongmin of Goryeo. She was also known with her Dharma name as Deok-wol and her new royal title as Princess Uihwa given by King Taejo of Joseon in 1392. 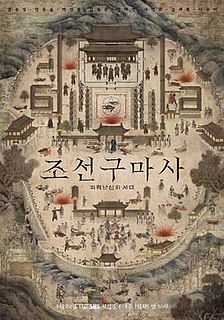 Joseon Exorcist is a South Korean historical-supernatural television series. The series,directed by Shin Kyung-soo and written by Park Gye-ok,stars Jang Dong-yoon,Park Sung-hoon and Kam Woo-sung. The series follows the fight of the royal family to protect people from the evil spirits,who use human frailties to demolish Joseon. The first two episodes aired on SBS TV on March 22 and 23,2021,at 22:00 (KST) before being canceled due to historical inaccuracies and Chinese props present in the series that resulted in the backlash from many Korean viewers.