Last updated December 20, 2020
In this Chinese name, the family name is Yuan .

Yuan Zhao was a son of Yuan Baohui (元寶暉) the Prince of Lintao, who was a grandson of Emperor Xiaowen and therefore cousin to Emperor Xiaoming, the reigning emperor at the time of Yuan Zhao's birth in 526.

Traditional historians treat Yuan Zhao ambiguously, and subsequent Northern Wei emperors never explicitly officially declared whether he was an emperor or not. He was not given an imperial posthumous name or temple name, but neither was his imperial status declared null. The official history of Northern Wei, the Book of Wei , written during the succeeding Northern Qi, did not list Yuan Zhao in its imperial biographies (and indeed, did not have a biography for him or his father at all), listing the events during his brief reign under the biography of Emperor Xiaoming, but used the term beng (崩) to describe his death, [2] a term reserved for the deaths of emperors and empresses.

Year 528 (DXXVIII) was a leap year starting on Saturday of the Julian calendar. At the time, it was known as the Year of the Consulship of Sabbatius without colleague. The denomination 528 for this year has been used since the early medieval period, when the Anno Domini calendar era became the prevalent method in Europe for naming years. 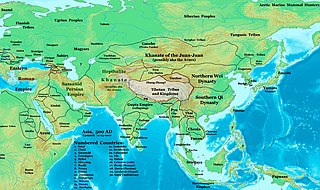 Empress Dowager Hu, formally Empress Ling (靈皇后,), was an empress dowager of the nomadic dynasty Northern Wei (515-528). She was a concubine of Emperor Xuanwu, and she became regent and empress dowager after her son Emperor Xiaoming became emperor after Emperor Xuanwu's death in 515. She was considered to be intelligent but overly lenient, and during her regency, many agrarian rebellions occurred while corruption raged among imperial officials. In 528, she was believed to have poisoned her son Emperor Xiaoming after he tried to have her lover Zheng Yan (鄭儼) executed. This caused the general Erzhu Rong to attack and capture the capital Luoyang. Erzhu threw her into the Yellow River to drown.

Emperor Xiaoming of Northern Wei ( 魏孝明帝), personal name Yuan Xu (元詡), was an emperor of the Xianbei dynasty Northern Wei (386–535). He ascended the throne in the age of five (515), so governmental matters were dominated by his mother Empress Dowager Hu. In 528, Emperor Xiaoming tried to curb his mother's powers and kill her lover Zheng Yan (鄭儼) by conspiring with the general Erzhu Rong. As a result, 18-year-old emperor was poisoned by his mother, who was soon overthrown by Erzhu. From that point on, Northern Wei royal lineage had no actual power. The next ruler, Emperor Xiaozhuang (507–531) was established by Erzhu. Since Erzhu's rival, general Gao Huan, enthroned another royal offspring, the country was soon split in two rival polities, Eastern and Western Wei, both of which did not hold long on the political map of the Southern and Northern Dynasties.

Yuan Yong (元雍), né Tuoba Yong (拓拔雍), courtesy name Simu (思穆), formally Prince Wenmu of Gaoyang (高陽文穆王), was an imperial prince of the Chinese/Xianbei dynasty Northern Wei. He was very powerful during the reign of his grandnephew Emperor Xiaoming, and by corrupt means grew very rich. This, however, drew resentment from the populace, and after Emperor Xiaoming's death in 528 and the subsequent overthrowing of Emperor Xiaoming's mother Empress Dowager Hu by the general Erzhu Rong, Erzhu had him and over 2,000 other officials slaughtered at Heyin.

Xiao Baoyin (蕭寶寅) (487–530), courtesy name Zhiliang (智亮), was an imperial prince of the Chinese dynasty Southern Qi. In 502, as Southern Qi was on the edge of being taken over by the general Xiao Yan, who was preparing by killing the imperial princes, Xiao Baoyin fled to rival Northern Wei and became an official and general in the Northern Wei government. In 527, as Northern Wei was embroiled in agrarian rebellions, Xiao Baoyin rebelled and tried to reestablish Southern Qi, but was soon defeated and forced to flee to a rebel leader, Moqi Chounu (万俟醜奴), and he served under Moqi until both were captured in 530 by the paramount general Erzhu Rong's nephew Erzhu Tianguang. He was forced to commit suicide.

Yuan Ye (元曄), courtesy name Huaxing (華興), nickname Penzi (盆子), often known as the Prince of Changguang (長廣王), was briefly an emperor of the Xianbei dynasty Northern Wei. He was declared emperor by members of the paramount general Erzhu Rong's clan in 530 after Emperor Xiaozhuang had killed Erzhu Rong, and he carried imperial title for several months. However, as a member of the imperial clan who was distant from the lineage of recent emperors (as a descendant of Emperor Wencheng's brother Yuan Zhen the Prince of Nan'an, he was not a credible emperor, and in 531, after the Erzhus had prevailed over Emperor Xiaozhuang and put him to death, they forced Yuan Ye to yield the throne to Emperor Xiaozhuang's cousin Yuan Gong the Prince of Guangling, who took the throne as Emperor Jiemin. Emperor Jiemin treated Yuan Ye with respect and created him the Prince of Donghai, a higher title than his prior title of Prince of Changguang, but after Emperor Jiemin and the Erzhus were in turn overthrown by a coalition led by the general Gao Huan and replaced with Emperor Xiaowu, Emperor Xiaowu forced Yuan Ye to commit suicide.

Erzhu Rong (爾朱榮), courtesy name Tianbao (天寶), formally Prince Wu of Jin (晉武王), was a general of the Chinese/Xianbei dynasty Northern Wei. He was of Xiongnu ancestry, and after Emperor Xiaoming was killed by his mother Empress Dowager Hu in 528, Erzhu overthrew her and put Emperor Xiaozhuang on the throne, but at the same time slaughtered many imperial officials and took over most of actual power either directly or through associates. He then contributed much to the rebuilding of the Northern Wei state, which had been rendered fractured by agrarian rebellions during Emperor Xiaoming's reign. However, in 530, Emperor Xiaozhuang, believing that Erzhu would eventually usurp the throne, tricked Erzhu into the palace and ambushed him. Subsequently, however, Erzhu's clan members, led by his cousin Erzhu Shilong and nephew Erzhu Zhao, defeated and killed Emperor Xiaozhuang. He was often compared by historians to the Han Dynasty general Dong Zhuo, for his ferocity in battle and for his violence and lack of tact.

Yuan Hao (元顥), courtesy name Ziming (子明) was an imperial prince and pretender to the throne of the Chinese/Xianbei dynasty Northern Wei, who briefly received allegiance from most of the provinces south of the Yellow River after he captured the capital Luoyang with support of neighboring Liang Dynasty. He became complacent after capturing Luoyang, however, and when the general Erzhu Rong, who supported Emperor Xiaozhuang, counterattacked later that year, Yuan Hao fled Luoyang and was killed in flight.

Emperor Jiemin of Northern Wei ( 魏節閔帝), also known as Emperor Qianfei (前廢帝), at times referred to by pre-ascension title Prince of Guangling (廣陵王), personal name Yuan Gong (元恭), courtesy name Xiuye (脩業), was an emperor of Northern Wei. He became emperor after the clan members of the paramount general Erzhu Rong, after Erzhu Rong was killed by Emperor Xiaozhuang, overthrew Emperor Xiaozhuang. Emperor Jiemin tried to revive the Northern Wei state, but with his power curbed by the Erzhus, was not able to accomplish much. After the general Gao Huan defeated the Erzhus in 532, Emperor Jiemin was imprisoned by Gao and subsequently poisoned to death by Emperor Xiaowu, whom Gao made emperor.