Yuliy Chersanovich Kim (Russian : Ю́лий Черса́нович Ким, Korean : 율리 킴; born 23 December 1936, Moscow) is one of Russia's foremost bards, composer, poet, songwriter for theater and films. His songs, encompassing everything from mild humor to biting political satire, appear in at least fifty Soviet movies, including Bumbarash , The Twelve Chairs , and An Ordinary Miracle , as well as the songs "The Brave Captain," "The Black Sea," "The Whale-Fish," "Cursed Lips," "Captain Bering," and "Baron Germont Went to War." Since 1998, he has been living in Israel and has made periodic tours through Russia, Europe, and the United States. [1]

Kim was born in 1936 in Moscow to Kim Chersan (1904–1938), a journalist of Korean descent, and Nina Valentinovna Vsesvyatskaya (1907-1974), a teacher of Russian language and literature who came from a Russian family of doctors. [1] [2] [3] Her grandfather Vasiliy Vsesvyatskiy was a protoiereus of the Russian Orthodox Church in the Ugodsko-Zavodsky Uezd of the Kaluga Governorate who baptized Georgy Zhukov. [3] [4]

Parents of Kim were victims of the Great Purge of 1937 and 1938, in which his father was executed and his mother was sentenced as a "family member of a traitor of the Motherland" to five years in a labor camp and three years of exile, so that Kim didn't see her until age 9. [2] [5] She was rehabilitated during the Khrushchev Thaw period in 1958, but before that, she was under the "101st kilometer" law and could not live in Moscow, so Kim's family settled in Maloyaroslavets, Kaluga Oblast. In 1951, the family moved to Turkmenistan. Kim returned to Moscow in 1954 to enter the Moscow State Pedagogical Institute.

In 1959, Kim graduated from the Department of History and Philology of Moscow State Pedagogical University. During his student years, he began writing poems and setting some of them to music. Upon graduation, he was sent to teach in the village of Il'pyrsky, Kamchatka, near Anapka, where he taught for three years. He taught history, literature, geography, and other subjects, and also directed a number of musical plays with the schoolchildren. Since then, the sea has become one of the main themes of his songs.

After returning to Moscow, Kim worked as a school teacher, and at the same time participated in the Soviet dissident movement, which cost him his job in 1968. Subsequently, Kim earned a living by writing songs for plays and movies as well as publishing plays under the pseudonym Yu. Mikhailov, which he used until 1986. At the same time, while he was barred from giving concerts, he continued his singing underground.

With the advent of glasnost, Kim was finally able to perform legally. Since the breakup of the Soviet Union, he has been acclaimed throughout the Russian-speaking world and has performed in numerous locations in Russia, Europe, and the United States. He has received numerous awards, such as the Bulat Okudzhava Prize of the Russian Federation.

Today, Yuliy Kim's discography includes over 20 titles on CD, audio and video tape, and DVD. His songs have been included in almost all anthologies of author’s song as well as many anthologies of modern Russian poetry.

His first wife was Irina Yakir — granddaughter of Red Army commander Iona Yakir. They married in 1966, and in 1998 they immigrated to Israel. After Irina's death in 1999, Kim married Lidia Lugovaya, Irina's close friend since school days. [1] [7] He currently splits his time between Jerusalem and Moscow. 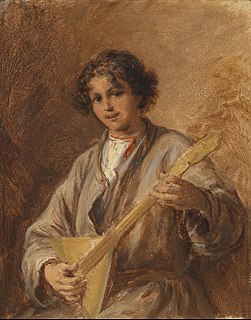 The term bard came to be used in the Soviet Union in the early 1960s, and continues to be used in Russia today, to refer to singer-songwriters who wrote songs outside the Soviet establishment, similarly to folk singers of the American folk music revival. Because in bard music songwriters perform their own songs, the genre is also commonly referred to as author song. Bard poetry differs from other poetry mainly in being sung with simple guitar accompaniment as opposed to being spoken. Another difference is that it focuses less on style and more on meaning. This means that fewer stylistic devices are used, and the poetry is often in the form of a narrative. What separates bard poetry from other songs is that the music is far less important than the lyrics; chord progressions are often very simple and tend to repeat from one bard song to another. A far more obvious difference is the commerce-free nature of the genre; songs are written to be sung and not to be sold, as the bards are often working professionals in a non-musical occupation.

Larisa Iosifovna Bogoraz was a dissident in the Soviet Union. 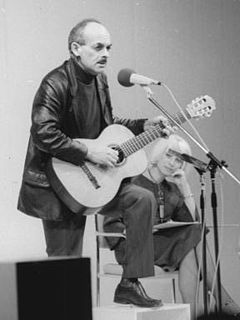 Bulat Shalvovich Okudzhava was a Soviet and Russian poet, writer, musician, novelist, and singer-songwriter of Georgian-Armenian ancestry. He was one of the founders of the Soviet genre called "author song", or "guitar song", and the author of about 200 songs, set to his own poetry. His songs are a mixture of Russian poetic and folksong traditions and the French chansonnier style represented by such contemporaries of Okudzhava as Georges Brassens. Though his songs were never overtly political, the freshness and independence of Okudzhava's artistic voice presented a subtle challenge to Soviet cultural authorities, who were thus hesitant for many years to give him official recognition. 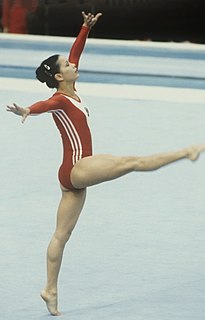 Nellie Vladimirovna Kim is a retired Soviet gymnast who won three gold medals and a silver medal at the 1976 Summer Olympics in Montreal, and two gold medals at the 1980 Summer Olympics. She was the second woman in Olympic history to earn a perfect 10 score and the first woman to score it on the vault and on the floor exercise, rivaling Nadia Comăneci, Ludmilla Tourischeva, and other strong competitors of the 1970s. Nellie Kim worked for a long time as a coach, training several national teams, and judged many major international competitions. As President of the Women's Artistic Gymnastics Technical Committee, she coordinates the introduction of new rules in women's gymnastics, as provided by the new Code of Points, developed by the FIG in 2004–2005 and in effect since 2006. Her gymnastic appearances are remembered for "her strong feminine, temperamental and charismatic appeal". 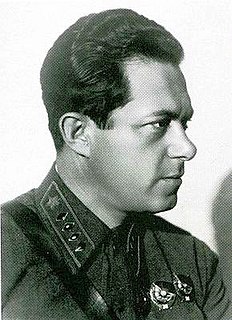 Iona Emmanuilovich Yakir was a Red Army commander and one of the world's major military reformers between World War I and World War II. He was an early and major military victim of the Great Purge, alongside Mikhail Tukhachevsky. 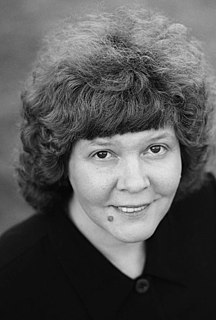 Serafim Sergeyevich Tulikov was a Russian and Soviet composer, who was born in the Imperial Russia, and died in Russia. He was often credited as S. Tulikov in his musical works and his cameo appearance in Russian television series. Serafim Tulikov is known for his patriotic and officially ideological compositions.

Edward Samoilovich Kuznetsov is a Soviet-born dissident, human rights activist, Prisoner of Zion and writer who settled in Israel in 1979.

Russian chanson is a neologism for a musical genre covering a range of Russian songs, including city romance songs, author song performed by singer-songwriters, and blatnaya pesnya or "criminals' songs" that are based on the themes of the urban underclass and the criminal underworld. 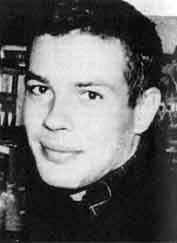 Vadim Nikolaevich Delaunay was a Soviet poet and dissident, who participated in the 1968 Red Square demonstration of protest against military suppression of the Prague Spring.

The 1968 Red Square demonstration took place on 25 August 1968 at Red Square, Moscow, Soviet Union, to protest the invasion of Czechoslovakia by the Soviet Union and its Warsaw Pact allies, that occurred during the night of 20–21 August 1968, crushing the Prague Spring, a set of de-centralization reforms promoted by Alexander Dubček.

Irina Vitalyevna Ponarovskaya is a Soviet and Russian singer and film actress, popular in the 1980s and the 1990s. 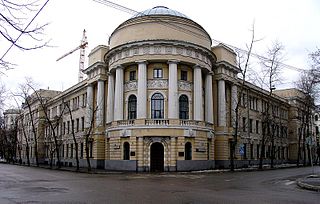 Moscow State Pedagogical University or Moscow State University of Education is a major educational and scientific institution in Moscow, Russia, with eighteen faculties and seven branches in other Russian cities. The institution has operated under a series of names since 1872.

Victor Aleksandrovich Krasin was a Russian human rights activist, economist, a former Soviet dissident and a political prisoner. At the time of his death Krasin was a US citizen.

Georgiy Nikolayevich Daneliya, also known as Giya Daneliya, was a Soviet and Russian film director and screenwriter. He was named a People's Artist of the USSR in 1989.

Anna Alexandrovna Barkova, July 16, 1901 – April 29, 1976, was a Soviet poet, journalist, playwright, essayist, memoirist, and writer of fiction. She was imprisoned for more than 20 years in the Gulag. In 2017 a film about her life was released by Ceská Televize, titled 8 hlav sílenství, starring the popular singer Aneta Langerová; it's mainly about her life in the camps and the women she loved.

Yuliy is a given name. Notable people with the name include:

Tatyana Mikhailovna Velikanova was a mathematician and Soviet dissident. A veteran of the human rights movement in the Soviet Union, she was an editor of A Chronicle of Current Events for most of that underground periodical's existence (1968-1983), bravely exposing her involvement with the anonymously edited and distributed bulletin at a press conference in May 1974.

Anatoly Aleksandrovich Yakobson was a literary critic, teacher, poet and a central figure in the human rights movement in the Soviet Union.