The Zadran (Pashto : ځدراڼ‎dzadrāṇ; pronounced dzādroṇ in the Khost-Paktia dialect), also spelled Dzadran or Jadran, is a Pashtun tribe that inhabits the Loya Paktia region in southeastern Afghanistan (Khost, Paktia, and Paktika provinces) and parts of Waziristan in neighboring Pakistan. "Zadran: Pashtun tribe mainly residing in the “Zadran Arc” a 9-district area encompassing portions of the Khost, Paktya, and Paktika provinces." [1] [2] [3] [4]

The Zadran are a branch of the Karlani tribal confederacy. [5] They are the largest Pashtun tribal group in Afghanistan's mountainous southeastern region, usually found in areas that are unsuitable for settled agricultural production. They have a reputation for militancy dating to the Soviet–Afghan War. Well-known Taliban fighter Jalaluddin Haqqani, who in later years headed the Haqqani network, is of the Zadran tribe himself, though he is recognized for ending the malik system by forcing Mohammad Omar Babrakzai to leave Paktia province. Babrakzai was the most powerful malik, or tribal chieftain, of the Zadran in the 1980s. [6] [7]

The known tribal tree for the Zadran tribe is as follow: [8] Pashtūnistān is a geographic historical region inhabited by the indigenous Pashtun people of modern-day Afghanistan and Pakistan in South-Central Asia, wherein Pashtun culture, language, and national identity have been based. Alternative names historically used for the region include "Pashtūnkhwā" (پښتونخوا) and "Afghānistān" (افغانستان), since at least the 3rd century CE onward. Pashtunistan borders Iran to the west, Persian and Turkic-speaking areas of Turkestan region to the north, Kashmir to the northeast, Punjab to the east, and Balochistan to the south. The region is alternatively called Pakhtūnistān, Pathānistān, or Pashtūnkhwa.

Paktia is one of the 34 provinces of Afghanistan, located in the east of the country. Forming part of the larger Loya Paktia region, Paktia Province is divided into 15 districts and has a population of roughly 623,000, which is mostly a tribal society living in rural areas. Pashtuns make up the majority of the population but smaller number of 01% are also found. Gardez is the provincial capital.

Waziristan is a mountainous region covering the former FATA agencies of North Waziristan and South Waziristan which are now districts of Khyber Pakhtunkhwa province of Pakistan. Waziristan covers some 11,585 square kilometres (4,500 sq mi). The area is populated by ethnic Pashtuns. It is named after the Wazir tribe. The language spoken in the valley is Pashto, predominantly the Waziri dialect. The region forms the southern part of Pakistan's Federally Administered Tribal Areas, which is now part of Khyber Pakhtunkhwa province.

Said Akbar Khan Babrakzai or Said Akbar khan was a Pashtun tribesmen from the tribal regions of Afghanistan He was a Pashtun of the Babrakzai clan and was also responsible for the assassination of the first Prime Minister of Pakistan, Liaqat Ali Khan, in Rawalpindi, Punjab Province, on October 16, 1951.

Jalaluddin Haqqani was an Afghan militant commander who founded the Haqqani network, an insurgent group fighting in guerilla warfare against US-led NATO forces and the now former government of Afghanistan they support.

Nika District, also known as Naka, is one of the most remote districts in Paktika Province, Afghanistan. It lies in a bowl-shaped valley and is only accessible by a few rocky river beds and a single dirt road, the latter of which is not passable in winter. The valley's economy is rudimentary and relies on wood cutting and subsistence farming. The district is within the heartland of the Zadran tribe of Pashtuns. The population in 2019 was estimated at 16,747. It was, until the US invasion 2001, a bastion for the Taliban, with mid-level and a few senior Taliban commanders spending time there, including Jalaluddin Haqqani, who has since taken up a prominent role in Al Queda and is rumored to have been one of Osama bin Laden's senior advisors. 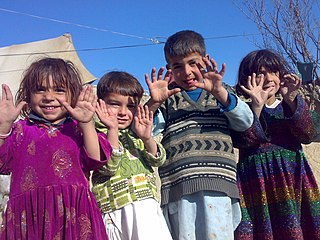 The Haqqani network is an Afghan guerrilla insurgent group, built around the family of the same name, that has used asymmetric warfare in Afghanistan to fight against Soviet forces in the 1980s, and US-led NATO forces and the Islamic Republic of Afghanistan government in the 21st century. It is considered to be a "semi-autonomous" offshoot of the Taliban. It has been most active in eastern Afghanistan and across the Durand Line in north-west Pakistan.

Zēṛōk is the main town of Zerok District in Paktika Province, Afghanistan. It is located within the heart of Zadran land on the main Khost-Urgun road.

Babrak Khan was a Zadran chieftain who was the father of Said Akbar Babrak and of Mazrak Zadran.