ZTE traces its roots back to 1912, at the time of the Austro-Hungarian Empire. Its first match was a 4–2 defeat to a team from Vasvár. The team was first composed of members of a literary and debating society. ZTE flourished under coach József Vadász, but World War I halted its progress. In 1920, Zalaegerszegi TE, or "Gymanistics Club of Zalaegerszeg," was born. They were defeated in their debut match, losing 2–1 to AK Szombathely on August 21, 1920, but were motivated by a crowd of over 2,000 fans.

ZTE's league history began in 1924, when they joined the Hungarian second division. The club won the title a decade later and entered the top flight in 1934. However, the start of World War II under the regime of Admiral Miklós Horthy saw ZTE's field and equipment confiscated. After the war, in 1957, ZTE merged with two other local teams, signalling the rebirth of the club.

From then on to the 1990s, however, ZTE did not really challenge the Hungarian title much. The league was dominated by Budapest club Ferencvárosi TC. In 1994, ZTE managed to gain a solid foothold on the Hungarian first division.

In the 2000s, the club reached their zenith by winning the Hungarian League for the first time in the club history. In the 2001–02 season, Zalaegrszeg finished second in the first stage of the championship gaining 61 points while Budapest rivals MTK Budapest FC 64 points. In the championship play-off Zalaegerszeg secured their first ever league title and finished on 71 points and Péter Bozsik's team overtook Budapest rivals Ferencváros and MTK Budapest along the way. [1] [2] Krisztián Kenesei and Gábor Egressy were the key figures of the title-winning team by scoring 37 goals. In the 2002–03 season, Zalaegerszeg finished in the bottom half of the table and competed in the relegation play-offs. In the following seasons, ZTE would consolidate in the lower half of the table, finishing in 9th, 6th and 11th place respectively.

In the 2002–03 UEFA Champions League qualifying phase Zalaegerszeg defeated Croatian champions NK Zagreb on away goals. The first match was played in Zalaegerszeg and the club won it by 1–0. [3] The only goal was scored by Darko Ljubojević. In the second leg Zagreb was winning by 2–0 when in the 87th minute Zalaegerszeg was awarded a penalty which was scored by Flórián Urbán. [4] ZTE beat Zagreb on away goals. In the third qualifying round Zalaegerszeg faced English giants Manchester United. In the first leg, ZTE provided a stunning shock by winning 1–0 with a last minute goal from Béla Koplárovics. [5] However, in the return leg at Old Trafford, Man United won a convincing 5–0 victory. [6] Ruud van Nistelrooy scored in the 5th minute and in the 75th minute then David Beckham, Paul Scholes, Ole Gunnar Solskjær scored. The English side progressed to the first group stage with a 5–1 aggregate victory. In the 2006–07 season after nine rounds Zalaegerszeg was on the top of the league table. [7] At the end of the season the club finished third securing a place in the European competitions of the Intertoto Cup 2007. In the spring of 2009 János Csank was appointed as the coach of the club. [8] The success coach has already won two Hunagrian League titles with Vác and Ferencváros.

In the 2010–11 season Zalaegerszeg was competing for the Europa League position with Budapest rivals Ferencváros but ZTE finished fourth and could not secure a place for the qualifiers. In the 2011–12 season Zalaegerszeg started the season with five consecutive defeats which resulted the dismissal of János Csank. He was replaced by former Ferencváros coach László Prukner. The first half of the 2011–12 Hungarian League season was a nightmare for the club since they finished last gaining only 6 points without any victories. On April 21, 2012 Zalaegerszeg were relegated to the second division of the Hungarian League after the defeat against titleholders Videoton.

On 15 May 2014, former Zalaegerszeg player Gergely Kocsárdi was elected as director of the club. It was also announced that the company called Pharos '95 gained more than 50% of the shares of the club for about 16 million HUF. [9]

Before the 2020-21 Nemzeti Bajnokság I season it was rumoured that former PSV Eindhoven and Hungary national football team star Balázs Dzsudzsák would be signed by the club. However, Gábor Végh, the owner of the club, claimed that the club had not started any negotiations with Dzsudzsák. [11]

In the 2021–22 Nemzeti Bajnokság I season, Zalaegerszeg finished 8th. One of the most spectacular victories of the season was when Zalaegerszeg beat Ferencváros 2-1 at the Groupama Aréna on 16 October 2021. However, on the negative side, Zalaegerszeg lost to Gyirmót 2-1 at home on 8 May 2022. [12]

The colours of the club are   blue and   white.

Zalaegerszeg play their matches in the ZTE Arena. The stadium is able to host 14000 people. Due to the increased attention Zalaegerszeg played their 2002–03 UEFA Champions League match against Manchester United at the Ferenc Puskás Stadium.

Ferencvárosi Torna Club, known as Ferencváros, Fradi, or simply FTC - Ferencvárosi Torna Club, is a professional football club based in Ferencváros, Budapest, Hungary, that competes in the Nemzeti Bajnokság I, the top flight of Hungarian football. Ferencváros was founded in 1899 by Ferenc Springer and a group of local residents of Budapest's ninth district, Ferencváros. Ferencváros is best known internationally for winning the 1964–65 edition of the Inter-Cities Fairs Cup after defeating Juventus 1–0 in Turin in the final. Ferencváros also reached the final in the same competition in 1968, when they lost to Leeds United, as well as the final in the 1974–75 season of the European Cup Winners' Cup, losing to Dynamo Kyiv. 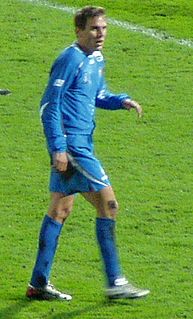 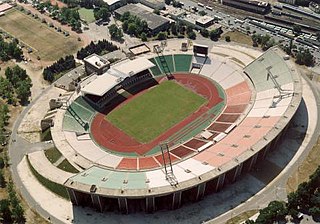 The Ferenc Puskás Stadium, or formerly People's Stadium (Népstadion) was a multi-purpose stadium in the 14th district (Zugló) of Budapest, Hungary. It was situated between the Puskás Ferenc Stadion and the Keleti pályaudvar metro stations. It was used mainly for football matches. The stadium, which was an all-seater, in the 2000s had a safe capacity of 38,652, though its original capacity exceeded 100,000. The stadium was closed in 2016 and demolished in 2017 to give place to the Puskás Aréna.

Balázs Dzsudzsák is a Hungarian professional footballer who plays for Nemzeti Bajnokság I club Debreceni VSC.

Kecskeméti Testedző Egyesület, commonly known as Kecskeméti TE or simply Kecskemét, is a sports club based in Kecskemét, Hungary. It is most famous for its football team which competes in the Nemzeti Bajnokság I, the first tier of Hungarian football. Kecskeméti TE's highest achievement to-date is winning the Magyar Kupa in the 2010–11 season, and gaining entry into the Europa League.

Róbert Waltner is a Hungarian football coach and a former player. He is currently serving as the manager for Hungarian first division team Paksi FC.

The 2009–10 Magyar Kupa was the 70th season of Hungary's annual knock-out cup football competition. It started with the first match of Round 1 on 5 August 2009 and ended with the Final held on 8 May 2010 at Stadium Puskás Ferenc, Budapest. The winners earned a place in the second qualifying round of the 2010–11 UEFA Europa League. Budapest Honvéd were the defending champions.

The 2011–12 Nemzeti Bajnokság I, also known as NB I for short, was the 110th season of top-tier football in Hungary. The league was officially named OTP Bank Liga for sponsorship reasons. The season began on 15 July 2011 and ended on 27 May 2012. Videoton were the defending champions, having won their first Hungarian championship at the end of the 2010–11 season.

László Prukner is a Hungarian football manager and former player, formerly managing Ferencvárosi TC, where he was in charge from 2010 to 2011. Prukner previously managed Kaposvári Rákóczi FC.

Paksi FC (Paks) is a Hungarian football club based in Paks. Since its founding in 1952, it has played at either a county or national level. In 2006, it ascended to Borsodi Liga, or NB I, the top division in Hungarian football, for the first time. It plays its home games at Fehérvári úti Stadion. The team colors are green and white. In the 2010–11 Hungarian Division, the team finished second and qualified for the Europa League 2011–12 season.

Dávid Miklós Sigér is a Hungarian professional footballer who plays as a midfielder for Ferencváros and the Hungary national team. 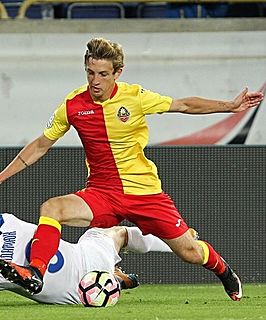 Artem Favorov is a Ukrainian professional footballer who plays as a striker for Zalaegerszeg on loan from Puskás Akadémia.

The 2019–20 Nemzeti Bajnokság I, also known as NB I, was the 121st season of top-tier football in Hungary. The league was officially named OTP Bank Liga for sponsorship reasons. Ferencváros were the defending champions. The season was postponed on 16 March 2020 due to the COVID-19 pandemic and resumed on 23 May.

The 2020–21 Nemzeti Bajnokság I, also known as NB I, is the 122nd season of top-tier football in Hungary. The league was officially named OTP Bank Liga for sponsorship reasons. Ferencváros were the defending champions.

Imre Aranyos is a Hungarian former professional footballer who played as a midfielder. He gained three caps for Hungary and was a member of 1993–94 Vác FC-Samsung squad that won Nemzeti Bajnokság I and became Hungarian champion first and up to date the last time in the club's history.

Wikimedia Commons has media related to Zalaegerszegi TE .
This page is based on this Wikipedia article
Text is available under the CC BY-SA 4.0 license; additional terms may apply.
Images, videos and audio are available under their respective licenses.