Zamfara is mostly populated with the Hausa and Fulani people. The Zamfarawa mainly in Anka, Gummi, Bukkuyum and Talata Mafara Local Governments areas. Gobirawa populated Shinkafi Local Government. Gobirawa actually migrated from the Gobir Kingdom. Burmawa are found in Bakura and Fulani peopled Bungudu, Maradun, Gusau and are scattered all over the State. In Chafe, Bungudu and Maru, most are mainly Katsinawa, Garewatawa and Hadejawa. While Alibawa peopled Kaura Namoda and Zurmi, while Alawan Shehu Usmanu Fulani Are Found in Birninmagaji.

It is bordered to the north by the Republic of the Niger, to the south by Kaduna State, to the east by Katsina State, and to the west by the states of Sokoto and Niger. It has a population of 9,278,873 according to the 2006 census and contains fourteen local government areas.

The people of Zamfara have over the years struggled for autonomy, but it was not until 1996 that the then military administration of the late General Sani Abacha detached the Zamfara State from Sokoto State with an area of 38,418 square kilometres. The first Governor was Jibril Yakubu.

The area today called Zamfara state was one of the old states like Kano, Katsina, Gobir, Kabi and Zazzau. The earliest inhabitants of Zamfara were said to have been hunters and giants. [4] They established their first settlement at Dutsi, which was the first capital of Zamfara. It extends up to the bend of River Rima to the north west and River Ka in the south west. Zamfara Kingdom was established in the 11th century and flourished up to 16th century as a city-state. Its capital has shifted with the fortunes of the kingdom from place to place like Dutsi and Birnin Zamfara.

In the first half of the 18th century, its then capital Birnin Zamfara, was destroyed by the Gobir Kingdom and a new capital was established in Anka by the second half of the 19th century. Zamfara had many centers of commerce and scholarship that attracted many scholars like the Yandoto city. It became part of the Sokoto Caliphate after the 1804 jihad by Usman dan Fodio. In fact, Usman Danfodiyo settled in Sabon Gari where Sarkin Zamfara Abarshi had already established a garrison headquarters during the early days of his Jihad as a base from where fought Gobir and Kabi. [5]

At the wake of British colonialism, the emerging town of Gusau became an important commercial and administrative center with road and rail networks passing through it. With the creation of states during the Gowon Administration, Zamfara Kingdom became part of the then North West state and later the Sokoto State. [5]

The climate condition of Zamfara is tropical with temperatures rising up to 38 °C (100.4 °F) and above between March and May. Rainy season starts in late May to September while the mild season known as Harmattan lasts from December to April.

Zamfara State consists of fourteen (14) Local Government Areas. They are:

Zamfara State is mainly populated by Hausa and Fulani people, with some members of Gwari, Kamuku, Kambari, Dukawa, Bussawa and Zabarma ethnic communities. [6] Others include the Igbo, Yoruba, Kanuri, Nupe and Tiv.

Hausa is the official language of the state. Other main languages spoken in Zamfara are English, French, Fulfulde, Arabic; minority populations also speak languages like: Yoruba and Igbo.

The Kainji languages C'Lela and Gwamhi-Wuri are spoken in Gummi LGA. Ut-Ma'in is also spoken in the state and in Kebbe, Sokoto State. [7]

Agriculture and gold mining are the state's main occupations and the central source of income. Irrigation is required for cereals and legumes, hence the slogan "farming is our pride". [8]

Over 80 percent of the population is engaged in agriculture. Major products include millet, guinea corn, maize, rice, groundnut, cotton, tobacco and beans. [9]

A list of tertiary institutions in Zamfara state include:

In 2009, gold mining became a greater source of income in Zamfara State as worldwide gold prices rose dramatically. [13] High concentrations of lead in the ore from which gold was being extracted led to a lead poisoning outbreak in the state, requiring national and international intervention to remediate affected areas and provide medical care to children with severe lead poisoning.

On 26 February 2021, 279 girls were abducted from their boarding school located in Jangebe, Zamfara during the Zamfara kidnapping. They have since been released. [14]

Islam is the principal and major religion of the state. Christianity also has many adherents. The original native religions also remain but they have the fewest followers. These religions are mainly practiced in ancient settlements like Dutsi and Kwatarkwashi. Zamfara was the first state in Nigeria to introduce Sharia law during the tenure of Ahmad Sani Yerima, the former Governor of the state.

Zamfara State holds some number of tourist attractions which are of historical or religious importance. These include Jata, an ancient settlement of Zamfara located around the hill with a large cave around where traditional practices were performed. [9]

Sokoto is a major city located in the extreme northwest of Nigeria, near the confluence of the Sokoto River and the Rima River. As of 2006 it has a population of people over 427,760. Sokoto is the modern-day capital of Sokoto State and was previously the capital of the north-western states.

The Fulani War of 1804–1808, also known as the Fulani Jihad or Jihad of Usman dan Fodio, was a military conflict in present-day Nigeria and Cameroon. The war began when Usman Dan Fodiyo, a prominent Islamic scholar and teacher, was exiled from Gobir by King Yunfa, one of his former students. 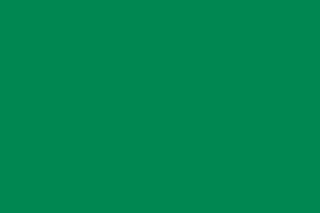 The Sokoto Caliphate was a Sunni Muslim caliphate in West Africa. It was founded by Usman dan Fodio in 1804 during the Fulani jihads after defeating the Hausa Kingdoms in the Fulani War. The boundaries of the caliphate make up present-day Cameroon, Burkina Faso, Niger, and Nigeria. It was dissolved when the British and Germans conquered the area in 1903 and annexed it into the newly established Northern Nigeria Protectorate and Kamerun respectively. 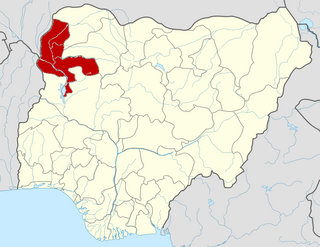 Kebbi State is a state in northwestern Nigeria, bordered to the east and north by the states of Sokoto and Zamfara, and to the south by Niger State while its western border forms part of the national borders with Benin Republic and Niger. Named for the city of Birnin Kebbi—the state's capital and largest city—Kebbi State was formed from a part of Sokoto State on 27 August 1991. Of the 36 states of Nigeria, Kebbi is the tenth largest in area and 22nd most populous with an estimated population of about 4.4 million as of 2016. 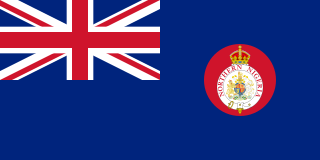 Northern Nigeria was an autonomous division within Nigeria, distinctly different from the southern part of the country, with independent customs, foreign relations and security structures. In 1962 it acquired the territory of the British Northern Cameroons, which voted to become a province within Northern Nigeria.

Gobir was a city-state in what is now Nigeria. Founded by the Hausa in the eleventh century, Gobir was one of the seven original kingdoms of Hausa land, and continued under Hausa rule for nearly seven hundred years. Its capital was the city of Alkalawa. In the early 19th century elements of the ruling dynasty fled north to what is today Niger from which a rival dynasty developed ruling as Sarkin Gobir at Tibiri. In 1975 a reunited traditional sultanate took up residence in Sabon Birni, Nigeria.

The Gusau Dam holds a reservoir on the Sokoto River just upstream from Gusau, capital of Zamfara State in Nigeria. It supplies water to the city and neighboring communities. In 2006, the dam collapsed, killing 40 people and destroying 500 homes.

Isa is a town and Local Government Area in the state of Sokoto in Nigeria. It shares borders with Shinkafi in Zamfara State, Goronyo and Sabon Birni from west and north respectively in Sokoto and the Republic of Niger in the east.

Kaura Namoda is a Local Government Area in Zamfara State, Nigeria. Its headquarters are in the town of Kaura-Namoda, home to the Federal Polytechnic, Kaura-Namoda. It has an area of 868 km2 and a population of 281,367 at the 2006 census.

Garba Nadama was a Nigerian politician who was the second civilian governor of Sokoto State, Nigeria, in the short-lived Nigerian Second Republic, holding office from January 1982 to November 1983. He succeeded Shehu Kangiwa, who had died in a polo accident.

Ahmed Rufai Sani Yerima was Governor of Zamfara State, Nigeria from May 1999 to May 2007, and served as Senator for Zamfara West and Deputy Minority Leader in the Senate. He is a member of the All Progressives Congress (APC).

Ahmadu Atiku also known as Ahmadu Zarruku was Sultan of Sokoto from 1859 to 1866. Prior to becoming Sultan, he was head of the Abu Bakr Atiku branch of Uthman Dan Fodio's family and held the title of Sarkin Zamfara with responsibilities for Sokoto town and south-east Sokoto. Atiku established the military settlement (ribat) at Chimmola which was across the valley from the town of Wurno and which he used as the seat of government.

Abdur Rahman Atiku sometimes known as, Abdu or Abd al-Rahman bin Atiku was Sultan of Sokoto from 1891 to 1902. In earlier vacancies, he had been a contender from the house of Atiku, but the house had been passed over three times since the death of Ahmadu Rufai in 1873. Abubakar Na Rabah, Mu'azu and Umaru bin Ali subsequent Sultans after Rufai were from the house of Muhammed Bello.

The 2019 Nigerian House of Representatives elections in Zamfara State was held on February 23, 2019, to elect members of the House of Representatives to represent Zamfara State, Nigeria. The All Progressives Congress won all seats but the Supreme Court nullified the elections of all the candidates of the APC in the elections. The court ruled that the APC did not conduct valid primaries in the build-up to the elections. A unanimous judgement by a five-member panel of Judges decided that the party had no valid candidate and cannot be said to have won the general elections.