Dame Zara Kate Bate DBE ( née Dickins;previously Fell and Holt;10 March 1909 –14 June 1989) was an Australian fashion entrepreneur. She was best known as the wife of Harold Holt,who was prime minister of Australia from 1966 until his disappearance in 1967.

Bate was born Zara Kate Dickins on 10 March 1909 at her parents' home in Kew,Victoria. [1] She was the second of four children born to Violet ( née MacDonald) and Sydney Dickins. [2] She was of Irish and Scottish descent,her mother being born in Scotland. [1]

Bate's father was a successful businessman. The family owned a Grégoire motorcar and employed a cook,parlour maid and governess. She was educated at home until about the age of 10,which she "remembered with distaste" and "remained convinced that such an education was a poor preparation for school and life". [1] In 1919,Bate began attending Ruyton Girls' School. She left school in 1925 at the age of 16,after completing her final year of secondary education at Toorak College. [2] She was first introduced to her future husband Harold Holt in early 1926,through a university student she was dating. [3]

In 1929,aged 19,Bate and her friend Betty James opened a dress shop named "Magg" on Little Collins Street,funded by a loan of £150 (equivalent to $6,000in 2018) from her father. [4] The shop was originally based in an upstairs room,but soon moved down the street into an old blacksmith's shop which they renovated. [5] She and James were featured in the women's section of The Herald as "two well-known Melbourne girls who have joined forces and gone into business", [6] and she later recalled that she was the only girl from her class at Toorak College to have "gone into trade". [5] After about a year,James left the partnership to marry architect Roy Grounds. Bate carried on alone for another year, [4] becoming exhausted by her work of purchasing fabric and designing,sewing and fitting dresses. [7] Her mother eventually insisted that she close the shop. Upon liquidating her stock she ended up with a profit of £1,500 (equivalent to $70,000in 2018),which she used to fund a trip around the world. [4]

Bate worked in marketing for her father's food manufacturing business during World War II,after separating from her first husband. She designed labels and advertisements for its Tandaco trademark,incorporating plastic recycled from munitions factories into its packaging. [5] [8] In May 1949,Bate resumed her partnership with Betty Grounds,opening a new Magg shop in Toorak. [9] She was the head designer while Grounds looked after the business aspects. [10] The business was immediately successful,benefiting from strong interest in designer wear after the end of wartime clothing rationing. [5] It employed up to 50 people, [4] with a boutique in Melbourne's Myer Emporium and a second shop at Double Bay in Sydney. [4] Magg was later managed by Bate's daughter-in-law Caroline Holt before being sold off in 1976. [11] In 1979 Bate was appointed as chair of Yves Saint Laurent's Australian subsidiary. [12]

A collection of Bate's dresses is held by the National Gallery of Victoria. [13] In 1964 The Canberra Times reported that she regarded her "greatest fashion triumph" as a mother-of-pearl silk skimmer dress worn by Tania Verstak,the winner of the Miss International 1962 pageant. [14] She designed the Australian women's uniform for the 1968 Summer Olympics in Mexico City,providing one design in "wattle yellow" for official use and another in "Olympic green" crimplene for casual wear. [15] In 1966,Bate was said to favour monochromatic "total look" dresses that were well-cut and "strongly styled". She praised the miniskirt style that Jean Shrimpton had controversially introduced to Australia the previous year,although noting that it did not suit all figures,and expressed her disdain for hats. [16]

Her first husband was Colonel James Fell,by whom she had three sons,Nicholas (1937) and twins Sam and Andrew (1939). Their marriage broke down soon after the birth of the twins. They divorced,and in 1946 she married Harold Holt,a Liberal Party politician. He legally adopted her children and gave them his surname. Tom Frame's biography The Life and Death of Harold Holt reveals that Holt was the twins' biological father.

Harold Holt was a member of Robert Menzies' cabinet continuously from 1949,becoming deputy Liberal leader in 1956 and Treasurer in 1958. When Menzies retired in January 1966,Holt became Prime Minister. Zara brought a new style and prominence to the role of prime minister's wife. [17] According to Diane Langmore,the author of Prime Ministers' Wives (published 1992),Zara Holt "was the only one of the prime ministers' wives to have been a successful businesswoman. No intellectual,and not particularly introspective,she had common sense and a lack of pretension which endeared her to many. [...] The tragedies of life did not make her bitter or cynical;she retained an openness and warmth until her death." [18]

In December 1967,Harold Holt disappeared while swimming near Portsea,Victoria;his body was never recovered.

Zara Holt was created a Dame Commander of the Order of the British Empire in the Queen's Birthday Honours of June 1968,for "devotion to the public interest". [19] In 1968 Dame Zara published My Life and Harry:An autobiography. [20]

On 19 February 1969,Dame Zara Holt married Jeff Bate,a farmer,Liberal politician and member of the Bate family of Tilba,New South Wales. She then became known as Dame Zara Bate. It was the third marriage for both of them. In the early 1970s,Dame Zara promoted Maxwell House instant coffee and Amana microwave ovens and refrigerators in television commercials. After Jeff Bate's death in 1984,Dame Zara retired to the Gold Coast,where she died in 1989 at age 80. 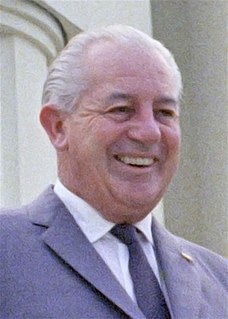 Harold Edward Holt was an Australian politician who served as the 17th prime minister of Australia from 1966 until his presumed death in 1967. He held office as leader of the Liberal Party. 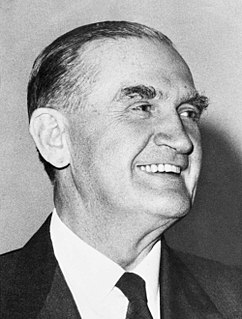 Sir John McEwen,was an Australian politician who served as the 18th prime minister of Australia,holding office from 1967 to 1968 in a caretaker capacity after the disappearance of Harold Holt. He was the leader of the Country Party from 1958 to 1971. 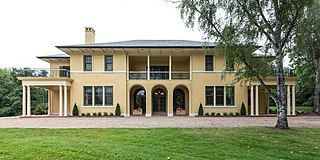 Malvern is an affluent inner suburb in Melbourne,Victoria,Australia,8 km south-east of Melbourne's Central Business District,located within the City of Stonnington local government area. Malvern recorded a population of 9,929 at the 2021 census. 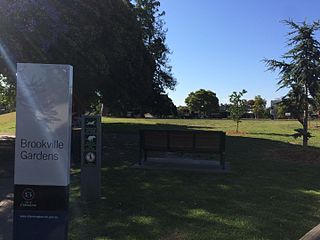 Toorak is an extremely affluent inner suburb in Melbourne,Victoria,Australia,5 km (3.1 mi) south-east of Melbourne's Central Business District,located within the City of Stonnington local government area,on Boonwurrung Land. Toorak recorded a population of 12,817 at the 2021 census.

The Division of Higgins is an Australian Electoral Division in Victoria for the Australian House of Representatives. The division covers 41 km2 (16 sq mi) in Melbourne's inner south-eastern suburbs. The main suburbs include Armadale,Ashburton,Carnegie,Glen Iris,Kooyong,Malvern,Malvern East,Murrumbeena,Prahran and Toorak;along with parts of Camberwell,Ormond and South Yarra. Though historically a safe conservative seat,Higgins was won by the Liberal Party by a margin of just 3.9 percent over the Labor Party at the 2019 election,the closest result in the seat’s history. It then flipped to Labor in the 2022 election. 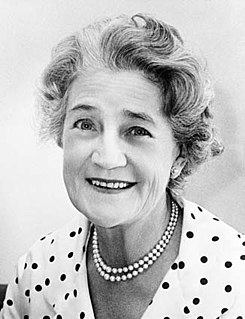 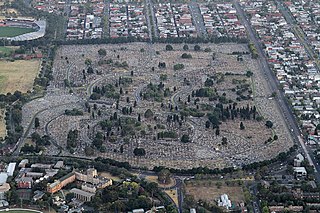 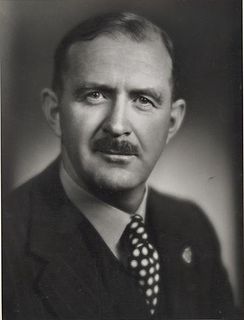 Henry Jefferson Percival "Jeff" Bate was an Australian politician,representing the United Australia Party and the Liberal Party of Australia for most of his career,but ended as an independent. 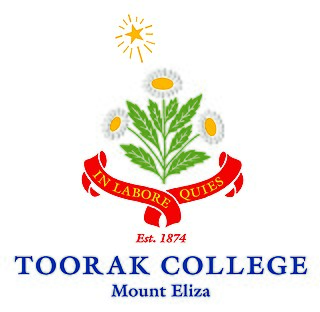 Toorak College is an independent,inter-denominational,boarding and day school for girls,grades 5 - 12 and is co-educational,boys and girls,from pre-school through grade four. The school is located on the Mornington Peninsula,above Port Phillip Bay in Mount Eliza,a town approximately forty kilometres south of Melbourne,Victoria,Australia.

Dame Mabel Brookes,DBE was an Australian community worker,activist,socialite,writer,historian,memoirist and humanitarian. Born Mabel Balcombe Emmerton in Raveloe,South Yarra,Victoria in 1890,her best-known service was as president of the Queen Victoria Hospital from 1923 to 1970,where she presided over the addition of three new wings within ten years.

Dame Anne Mills McEwen DBE,known as Annie McEwen,was an Australian social activist,and the wife of John McEwen. She was active in the Country Party and devoted her life to working for the public good. 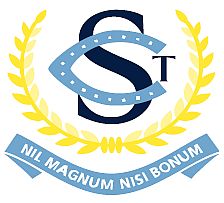 St Catherine's School is an independent and non-denominational Christian day and boarding school for girls,located in Toorak,an inner south-eastern suburb of Melbourne,Victoria,Australia. 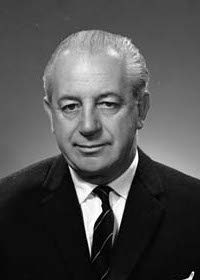 The Holt government was the federal executive government of Australia led by Prime Minister Harold Holt. It was made up of members of a Liberal-Country Party coalition in the Australian Parliament from 26 January 1966 to 19 December 1967.

The Bate family is an Australian political family:

On 1965 Derby Day at Flemington Racecourse in Melbourne,Australia,English model Jean Shrimpton wore a white minidress that sparked controversy and was later described as a pivotal moment in women's fashion. The dress was made by Shrimpton's dressmaker,Colin Rolfe,and its hem was 4 in (10 cm) above the knee because he had not been supplied with enough fabric to complete their intended design.

On 17 December 1967,Harold Holt,the Prime Minister of Australia,disappeared while swimming in the sea near Portsea,Victoria. An enormous search operation was mounted in and around Cheviot Beach,but his body was never recovered. Holt was presumed to have died,and his memorial service five days later was attended by many world leaders. It is generally agreed that his disappearance was a simple case of an accidental drowning,but a number of conspiracy theories surfaced,most famously the suggestion that he was a spy from the People's Republic of China and had been collected by a Chinese submarine. Holt was the third Australian prime minister to die in office,after Joseph Lyons in 1939 and John Curtin in 1945. He was initially replaced in a caretaker capacity by John McEwen,and then by John Gorton following a Liberal Party leadership election. Holt's death has entered Australian folklore,and was commemorated by,among other things,the Harold Holt Memorial Swimming Centre.

Peter Hamilton Bailey was a former Australian public servant and academic. He served as an advisor to seven Australian prime ministers,and later became a professor in human rights law at the Australian National University (ANU).

The Liberal Party of Australia held a leadership ballot on 20 January 1966,following the resignation of Robert Menzies. Incumbent deputy leader Harold Holt was elected unopposed as his successor,and was sworn in as prime minister on 26 January. William McMahon defeated Paul Hasluck in the ballot to replace Holt as deputy leader.