This district is one of the most beautiful and peaceful areas of Herat City. Fushanj is the old name of this area, but now the people name this area Zendejan (the only survival). There are many old and ancient histories about this name, but the most famous one relate to the time when Genghis Khan attacked to this ancient city, killed all and no one was remain except one. And later as the result, the other people called this area Zendejan which mean the only survival.

Zendejan has about 70 thousand people, including 157 villages. There are 22 schools in the district, including 3 female and 4 male high schools with a total of 17,000 students which 7,000 students are girls, and all the people in this district speak Farsi/Dari.

Most of the people in this district are farmers. Wheat and grain, besides there are plenty of fruits such as apples, pear, grapes, figs, peanuts, berries, in their gardens. Recently; most of the people grow Saffron, and Saffron of this area is known as the best Saffron in the world. Also silk industry of this area is one of other important skills these people have.

Safranbolu is a town and district of Karabük Province in the Black Sea region of Turkey. It is about 9 km north of the city of Karabük, 200 kilometres (120 mi) north of Ankara and about 100 km south of the Black Sea coast. The town's historic names in Greek were Theodoroupolis and later Saframpolis (Σαφράμπολις). Its former names in Turkish were Zalifre and Taraklıborlu. It was part of Kastamonu Province until 1923 and Zonguldak Province between 1923 and 1995.

South Khorasan Province is a province located in eastern Iran. Birjand is the centre of the province. The other major cities are Ferdows, Tabas and Qaen. In 2014, it was placed in Region 5. 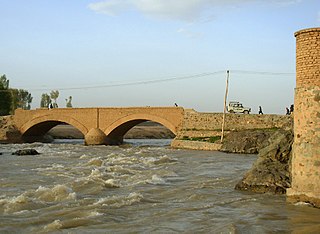 Qayen is a city in and the capital of Qaen County, in South Khorasan Province, Iran. The population at the 2006 census, was 32,474 in 8,492 families. Qaen is also called the City of Saffron because it is a major saffron producer and saffron from Qaen is prized for its unique aroma and strong colour.

Germi County is a county in Ardabil Province in Iran. It is on the north of Ardabil city. The capital of the county is Germi. 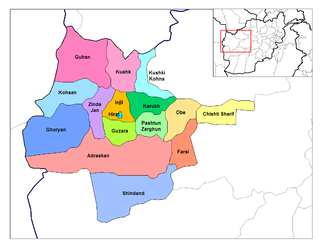 Marvast is a city in and capital of Marvast District, Khatam County, Yazd Province, Iran. At the 2006 census, its population was 7,585, in 1,966 families.