Last updated June 19, 2021
Chinese epidemiologist at the Chinese Center for Disease Control and Prevention
In this Chinese name, the family name is Zeng .

Zeng Guang (Chinese :曾光; pinyin :Zēng Guāng; born 22 May 1946) is a Chinese epidemiologist who is a chief scientist and doctoral supervisor at the Chinese Center for Disease Control and Prevention (Chinese CDC). [1] He is a member of the High-level Expert Panel of National Health Commission. [2]

Zeng was born in 1946 in the Republic of China. After graduating from Hebei Medical College (now Hebei Medical University), he was in graduate school of Peking Union Medical College, studying for a master's degree in medical science. He was a visiting scholar at the Centers for Disease Control and Prevention (CDC) between 1985 and 1986. In 2003, he served as a consultant for the SARS Prevention and Control Headquarters. During the COVID-19 pandemic, on January 29, 2020, he stated in an interview with People's Daily that "the incubation period of the disease falls within 14 days" and he also recommended that people should avoid panic and overreaction. [3]

The United States Centers for Disease Control and Prevention is the national public health agency of the United States. It is a United States federal agency, under the Department of Health and Human Services, and is headquartered in Atlanta, Georgia.

Julie Louise Gerberding is an American infectious disease expert who was the first woman to serve as the director of the U.S. Centers for Disease Control and Prevention (CDC). She is currently the executive vice president for strategic communications, global public policy & population health and the chief patient officer at Merck.

HIV/AIDS in China can be traced to an initial outbreak of the human immunodeficiency virus (HIV) first recognized in 1989 among injecting drug users along China's southern border. Figures from the Chinese Center for Disease Control and Prevention, World Health Organization, and UNAIDS estimate that there were 1.25 million people living with HIV/AIDS in China at the end of 2018, with 135,000 new infections from 2017. The reported incidence of HIV/AIDS in China is relatively low, but the Chinese government anticipates that the number of individuals infected annually will continue to increase. 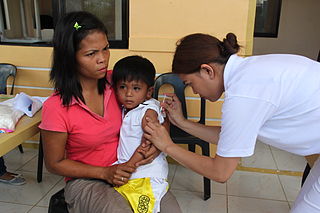 Measles vaccine protects against becoming infected with measles. Nearly all of those who do not develop immunity after a single dose develop it after a second dose. When rates of vaccination within a population are greater than 92%, outbreaks of measles typically no longer occur; however, they may occur again if rates of vaccination decrease. The vaccine's effectiveness lasts many years. It is unclear if it becomes less effective over time. The vaccine may also protect against measles if given within a couple of days after exposure to measles. 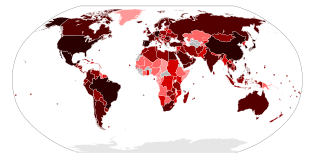 The 2009 swine flu pandemic was an influenza pandemic that lasted about 19 months, from January 2009 to August 2010, and was the most recent flu pandemic involving H1N1 influenza virus. The first two discoveries were independently made in the United States in April 2009. The virus appeared to be a new strain of H1N1 that resulted from a previous triple reassortment of bird, swine, and human flu viruses and that further combined with a Eurasian pig flu virus, leading to the term "swine flu".

The Chinese Center for Disease Control and Prevention is an independent agency of the National Health Commission, based in Beijing, China. Established in 1983, it works to protect public health and safety by providing information to enhance health decisions, and to promote health through partnerships with provincial health departments and other organizations. The CCDC focuses national attention on developing and applying disease prevention and control, environmental health, occupational safety and health, health promotion, prevention and education activities designed to improve the health of the people of the People's Republic of China. 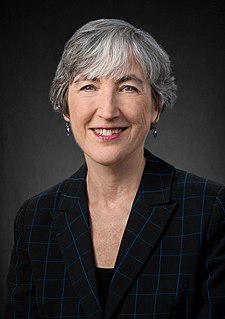 Anne Schuchat is an American medical doctor. She is a former rear admiral and assistant surgeon general in the United States Public Health Service Commissioned Corps, who currently serves as the principal deputy director of the Centers for Disease Control and Prevention (CDC).

Kevin Andrew Fenton FFPH is a regional director at Public Health England. He was formerly director of the United States National Center for HIV/AIDS, Viral Hepatitis, STD, and TB Prevention, part of the Centers for Disease Control and Prevention. 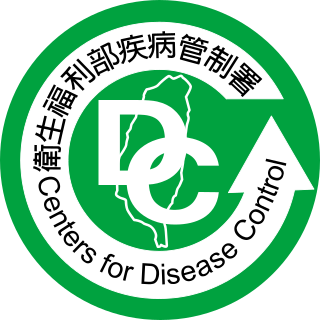 The National Health Commission of the People's Republic of China is a cabinet-level executive department of the State Council which is responsible for formulating health policies in Mainland China. It was formed on 19 March 2018. The ministry is headquartered in Beijing. The commission is led by a Minister of cabinet rank in the state council. Ma Xiaowei is the current Minister in charge of the Commission and Party Branch Secretary. Its predecessor was the National Health and Family Planning Commission. 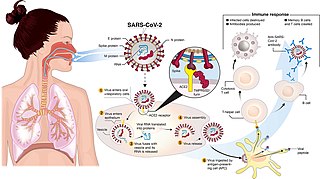 Coronavirus disease 2019 (COVID-19) is a contagious disease caused by severe acute respiratory syndrome coronavirus 2 (SARS-CoV-2). The first known case was identified in Wuhan, China in December 2019. The disease has since spread worldwide, leading to an ongoing pandemic.

There is no specific, effective treatment or cure for coronavirus disease 2019 (COVID-19), the disease caused by the SARS-CoV-2 virus. Thus, the cornerstone of management of COVID-19 is supportive care, which includes treatment to relieve symptoms, fluid therapy, oxygen support and prone positioning as needed, and medications or devices to support other affected vital organs.

Zeng Yi was a Chinese virologist. He was a professor at Beijing University of Technology and a researcher at Chinese Center for Disease Control and Prevention. 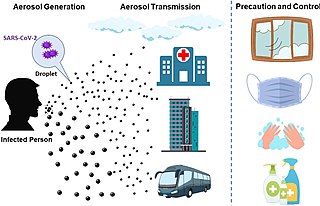 The transmission of COVID-19 is the passing of coronavirus disease 2019 from person to person. The disease is mainly transmitted via the respiratory route when people inhale droplets and particles that infected people release as they breathe, talk, cough, sneeze, or sing. Infected people are more likely to transmit COVID-19 the when they are physically close. However, infection can occur over longer distances, particularly indoors.