listen )) is a Chinese surname and also the name of an ancient state in today's Henan province. It is written as 鄭 in traditional Chinese and 郑 in simplified Chinese. It is the 7th name on the Hundred Family Surnames poem.

The surname also has taken form outside of Chinese societies: in Vietnamese as Trịnh. In Korean, the name is written 정 and transliterated as Chung, Jung, or Jeong. It is the fifth most common Korean surname (after Kim, Lee, Park, and Choi), with about 4.85% of the South Korean population (2,230,611 people) having this name.[ citation needed ]

The Zheng surname originated in Henan. In 806 BC, King Xuan, the penultimate king of the Western Zhou Dynasty, enfeoffed his younger brother Prince You, who became posthumously known as Duke Huan of Zheng, at Zheng (present-day Hua County, Shaanxi). Duke Huan was killed along with King You of Zhou when the Quanrong tribes sacked the Zhou capital Haojing in 771 BC. Duke Huan was succeeded by his son Duke Wu, who helped King Ping of Zhou establish the Eastern Zhou Dynasty in Luoyang, and his feudal state of Zheng was also moved east to present-day Henan. His descendants and many people of the state later adopted Zheng as their surname. [6] [7] [8]

The city of Xingyang is considered as the origin place of the people whose surname is Zheng. Today, Xingyang is under the administration of the prefecture-level city of Zhengzhou (鄭州) which translates to "Settlement of Zheng". Zhengzhou is the capital of Henan province and is located within the boundaries of the ancient state of Zheng (state). There is also another city called Xinzheng ("New Zheng"), also under the administration of Zhengzhou.

The Zheng clan character (鄭) is featured prominently on the flag of the short-lived rebel Kingdom of Tungning founded by Ming-loyalist Koxinga (who had the surname Zheng) in Taiwan. Also called the Kingdom of Formosa.

Of the top 30 cities in China, 郑 ranked 4th most common surname in the city of Fuzhou. [12]

King Ling of Zhou, personal name Ji Xiexin, was the twenty-third king of the Chinese Zhou Dynasty and the eleventh of Eastern Zhou. He died in 545 BC. 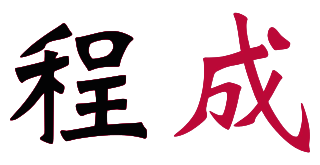 Cheng can be a transcription of one of several Chinese surnames. Since the syllable Cheng represents different sounds in Hanyu pinyin and the Wade–Giles systems of Chinese romanization, some ambiguity will exist as to which sound is represented by the letters "Cheng" if the romanisation and tone is not known. Also within each system of romanisation, each syllable can represent one of several different characters, as with any Chinese syllable.

Zheng Yi was a powerful Chinese pirate operating from Guangdong and throughout the South China Sea in the late 1700s. 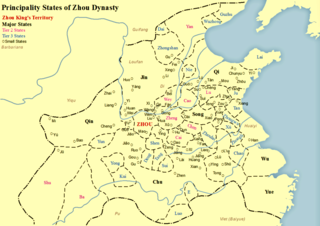 Zheng was a vassal state in China during the Zhou Dynasty located in the centre of ancient China in modern-day Henan Province on the North China Plain about 75 miles (121 km) east of the royal capital at Luoyang. It was the most powerful of the vassal states at the beginning of the Eastern Zhou, and was the first state to clearly establish a code of law in its late period of 543 BCE. Its ruling house had the ancestral name Ji (姬), making them a branch of the Zhou royal house, who were given the rank of Bo (伯), corresponding roughly to being a Count.

The Kingdom of Tungning or Kingdom of Formosa was a government that ruled part of southwestern Formosa (Taiwan) between 1661 and 1683. It was founded by Koxinga as part of the loyalist movement to restore the Ming dynasty in China after it was overthrown by the Manchu-led Qing dynasty. Koxinga hoped to recapture the mainland China from the Qing, using the island as a base of operations. Until its annexation by the Qing Dynasty in 1683, the Kingdom was ruled by Koxinga's heirs, the House of Koxinga.

Zheng Keshuang, Prince of Yanping, courtesy name Shihong, art name Huitang, was the third and last ruler of the Kingdom of Tungning in Taiwan in the 17th century. He was the second son of Zheng Jing and a grandson of Koxinga. After surrendering to the Qing dynasty in 1683, he was ennobled as Duke Hanjun, and lived the rest of his life in Beijing.

The romanisation of the Chinese language in Singapore is not dictated by a single policy, nor is its policy implementation consistent, as the local Chinese community is composed of a myriad of topolect groups. Although Hanyu Pinyin is adopted as the preferred romanisation system for Mandarin and the standard of Chinese education, the general lack of a romanisation standard for other Chinese varieties results in some level of inconsistency. This may be illustrated by the many variants for the same Chinese characters often found in surnames such as Low, Loh, Lo; Tay, Teh; Teo, Teoh; Yong, Yeong.

The Hundred Family Surnames, commonly known as Bai Jia Xing, also translated as Hundreds of Chinese Surnames, is a classic Chinese text composed of common Chinese surnames. The book was composed in the early Song dynasty. It originally contained 411 surnames, and was later expanded to 504. Of these, 444 are single-character surnames, and 60 are double-character surnames. About 800 names have been derived from the original ones. 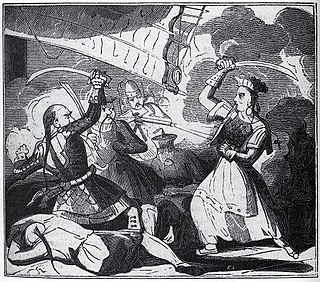 Zheng Yi Sao, also known as Ching Shih, meaning wife of Ching (Zheng), was a Chinese pirate leader who terrorized the South China Sea from 1807 to 1810. Zheng Yi Sao was a honorific bestowed upon her by the people of Guangdong, meaning wife of Zheng Yi. She was the unofficial commander of the Guangdong Pirate Confederation, which was composed of 400 junks and between 40,000 to 60,000 pirates in 1805. Her ships entered into conflict with several major powers, such as the East India Company, the Portuguese Empire, and Qing China.

The Cui clan of Qinghe (清河崔氏) was an eminent Chinese family of high-ranking government officials and Confucian scholars. The clan's ancestral home was in Qinghe Commandery (清河郡), which covered parts of present-day Shandong and Hebei provinces. 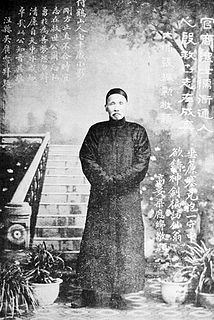 Zheng Guanying or Cheng Kuan-ying was a Chinese reformist active in the late Qing Dynasty. He was a proponent of fighting economic dominance by Western countries of China through economic nationalism, of parliamentary representative democracy, and of women's rights.

Cheng Changgeng was a Qing dynasty Hui opera and Peking opera artist based in Beijing, who specialized in laosheng roles, or old gentlemen. Sometimes called the "Father of Peking Opera", he was the leader of the Three Celebrations Company (三慶班) as well as the leader of the actor's guild in Beijing. He was from Qianshan, Anhui.

The Zheng clan of Xingyang (滎陽鄭氏) was a prominent Chinese clan, chiefly based around Xingyang. Tracing their origins to the rulers of the State of Zheng, they became highly prominent in government during the Northern and Southern Dynasties, where they became one of the "Four Clans" in Northern Wei, and also during the Tang Dynasty.

Tongyushi (彤魚氏) was a legendary empress, the third wife of the Yellow Emperor. According to tradition, she invented the cooking and chopsticks in the 27th century BC.

Surname list
This page lists people with the surname Zheng.
If an internal link intending to refer to a specific person led you to this page, you may wish to change that link by adding the person's given name(s) to the link.
This page is based on this Wikipedia article
Text is available under the CC BY-SA 4.0 license; additional terms may apply.
Images, videos and audio are available under their respective licenses.