Ion Heliade Rădulescu or Ion Heliade was a Wallachian, later Romanian academic, Romantic and Classicist poet, essayist, memoirist, short story writer, newspaper editor and politician. A prolific translator of foreign literature into Romanian, he was also the author of books on linguistics and history. For much of his life, Heliade Rădulescu was a teacher at Saint Sava College in Bucharest, which he helped reopen. He was a founding member and first president of the Romanian Academy.

Lanurile may refer to several villages in Romania: 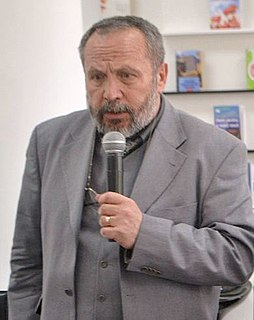 Nichita Danilov is a Romanian poet. He served as the acting ambassador of Romania to Moldova in 1999.

The 2019–20 Liga IV Argeș was the 52nd season of the Liga IV Argeș, the fourth tier of the Romanian football league system. The season began on 24 August 2019 and was ended officially on 21 July 2020, after it was suspended in March 2020, due to COVID-19 pandemic in Romania. Voința Budeasa was crowned as county champion.

The 2019–20 Liga IV Dolj, commonly known as Liga IV Mass for sponsorship reasons, was the 52nd season of the Liga IV Dolj, the fourth tier of the Romanian football league system. The season began on 24 August 2019 and was scheduled to end in June 2020, but was suspended in March because of the COVID-19 pandemic in Romania.

Dimitrie Cariagdi was a Romanian politician.