The Zizhi Tongjian (Chinese :資治通鑑; pinyin :Zīzhì Tōngjiàn; lit. 'Comprehensive Mirror in Aid of Governance' [note 1] ) is a pioneering reference work in Chinese historiography, published in 1084 AD during the Song dynasty in the form of a chronicle. In 1065 AD, Emperor Yingzong of Song ordered the great historian Sima Guang (1019–1086 AD) to lead with other scholars such as his chief assistants Liu Shu, Liu Ban and Fan Zuyu, [1] the compilation of a universal history of China. The task took 19 years to complete, [1] and in 1084 AD, it was presented to his successor Emperor Shenzong of Song. The Zizhi Tongjian records Chinese history from 403 BC to 959 AD, covering 16 dynasties and spanning across almost 1400 years, [1] and contains 294 volumes ( 卷 ) and about 3 million Chinese characters.

The principal text of the Zizhi Tongjian was recorded on 294 juan (Chinese : 卷 ), which are scrolls corresponding to a volume, chapter, or section of the work. The text is a chronological narrative of the history of China from the Warring States to the Five Dynasties. The major contributor, Sima (family name) Guang, was active in each step from collecting events and dates from various previous works to drafting and publication.

Sima Guang left the traditional usage in Chinese historiography. For almost 1,000 years since the Shiji was written, standard Chinese dynastic histories had primarily divided chapters between annals ( 紀 ) of rulers, and biographies ( 傳 ) of officials. In Chinese terms, the book changed the format of histories from biographical style (紀傳體) to chronological style (編年體), which is better suited for analysis, activism and criticism. According to Wilkinson: "It had an enormous influence on later Chinese historical writing, either directly or through its many abbreviations, continuations, and adaptations. It remains an extraordinarily useful first reference for a quick and reliable coverage of events at a particular time." [2]

The 294 juan sweep through several Chinese historical periods (Warring States, Qin, Han, Three Kingdoms, Jin and the Sixteen Kingdoms, Southern and Northern Dynasties, Sui, Tang, and Five Dynasties). It was one of the largest historical compilations (magna opera) in history.

Historian Rafe de Crespigny has published translations of chapters 54–59 and 59–69 under the titles "Emperor Huan and Emperor Ling" and "To Establish Peace" (Australian National University), respectively, covering 157–220 CE, while the next ten chapters (70–79) covering up to 265 CE were previously translated by Achilles Fang in "The Chronicle of the Three Kingdoms" (Harvard University Press). Chapters 1–8, covering the years 403–207 BCE, have been translated into English with copious notes and annotations. [4] Some additional sections of Zizhi Tongjian pertaining to the Xiongnu people from Northern China have been translated into English. [5]

The book consisted of 294 chapters, of which the following number describe each respective dynastic era: 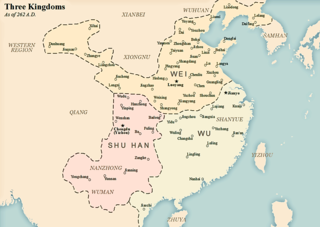 Wiman Joseon was part of the Gojoseon period of ancient Korean history. It began with Wiman's seizure of the throne from Gojoseon's King Jun and ended with the death of King Ugeo who was a grandson of Wiman. Apart from archaeological data, the main source on this period of Korean history comes from chapter 115 of Sima Qian's Shiji. Wiman was originally a Chinese military leader from the Kingdom of Yan under the Han dynasty.

Richard Rafe Champion de Crespigny, also known as Zhang Leifu, is an Australian sinologist and historian, currently an adjunct professor in the College of Asia and the Pacific at the Australian National University. He specialises in the history, geography, and literature of the Han dynasty, particularly the translation and historiography of material concerning the Han dynasty and the Three Kingdoms period.

Guo Zongxun (郭宗訓), also known by his posthumous name Gongdi, was the third and last emperor of ancient China's short-lived Later Zhou during the Five Dynasties and Ten Kingdoms period. He reigned from July 959, when he succeeded his father Chai Rong, until February 960, when he was overthrown by general Zhao Kuangyin, who founded the Song Dynasty.

Yanmen Pass, also known by its Chinese name Yanmenguan and as Xixingguan, is a mountain pass which includes three fortified gatehouses along the Great Wall of China. The area was a strategic choke point in ancient and medieval China, controlling access between the valleys of central Shanxi and the Eurasian Steppe. This made it the scene of various important battles, extending into World War II, and the area around the gatehouses and this stretch of the Great Wall is now a AAAAA-rated tourist attraction. The scenic area is located just outside Yanmenguan Village in Yanmenguan Township in Dai County, Xinzhou City, Shanxi Province, China.

The Xu Zizhi Tongjian Changbian is an 1183 Chinese history book by Li Tao which chronicles the history of Northern Song Dynasty (960–1127). The book took Li Tao about 40 years to complete and was finally published in 1183 with 980 chapters. However, only 520 chapters are extant. As the sequel to Sima Guang's landmark work Zizhi Tongjian, it follows the same format, but is not as concise and refined.

Xu Zizhi Tongjian was a book chronicling Chinese history of Song Dynasty between 960-1279 and Yuan Dynasty between 1279-1370. Credited to Bi Yuan (畢沅) (1730-1797), a high-ranking politician in the Qing Dynasty, the book was not completed until after his death in 1801 by Feng Jiwu (馮集梧). Authors include historians Yan Changming (嚴長明), Cheng Jinfang (程晉芳), Shao Jinhan (邵晉涵), Hong Liangji (洪亮吉), Sun Xingyan (孫星衍) and Zhang Xuecheng (章學誠). One of the many sequels to Sima Guang's landmark work Zizhi Tongjian, it follows the same format, including comments on differences from various sources. Of the 220 volumes only 38 are on the Yuan Dynasty compared to 182 on the preceding Song Dynasty.

Fàn Zhi, formally the Duke of Lu (魯國公), was a civil official who served under 12 emperors of 6 dynasties during imperial China's Five Dynasties and Ten Kingdoms period and the subsequent Song Dynasty. He was the Later Zhou chancellor from 951 until 960, and the Song Dynasty chancellor from 960 until 964, not long before his death. A strict adherent to legal guidelines, he had influenced Later Zhou and Song rulers to rely more on civil administration in an age dominated by the military. Fàn was a member of the elite Fàn family.

Liu Min (劉旻), named Liu Chong (劉崇) before 951, also known by his temple name Shizu (世祖), was the founding emperor of imperial China's Northern Han state during the Five Dynasties and Ten Kingdoms period. He was an ethnic Shatuo and the younger brother of Later Han's founder Liu Zhiyuan.

The Sushui Jiwen is a book written by the Song Dynasty historian Sima Guang (1019–1086) in imperial China. While working with Liu Daoyuan (劉道原) and others to compile a never-published Zizhi Tongjian Houji (資治通鑑後記), a book on the Song Dynasty history, Sima Guang collected many miscellaneous anecdotes. While he might have intended to include them in Tongjian Changbian, the "weird" stories became Sushui Jiwen in c. 1180 after his death. The Sushui is a small tributary of the Yellow River, and Sima Guang was nicknamed Mr. Sushui (涑水先生) as his hometown of Xia County is on the Sushui. Because the book was compiled by later editors, the number of chapters vary according to the edition: one has 10 chapters, another has 2, and the one in Siku Quanshu has 16 — although many repetitions occur in ch. 9–13.

Guo Chong, known as Guo Chongwei before 951, was a military general and officer who successively served the Later Tang, Later Jin, Later Han, Later Zhou and Song dynasties. He was likely an ethnic Shatuo.

Bao Xuan, courtesy name Zidu (子都), was a Han dynasty censor during the reign of Emperor Ai, known for his integrity and courage. He was exiled for offending the grand councilor Kong Guang (孔光), and later died in prison for opposing Wang Mang.

Dugu Xin (獨孤信), Xianbei name Qimitou (期彌頭), known as Dugu Ruyuan (獨孤如願) before 540, was a prominent military general and official during the chaotic Northern and Southern dynasties period of imperial China. In 534, Dugu Xin followed Emperor Xiaowu of Northern Wei to the west to join the warlord Yuwen Tai, and in the ensuing years led Western Wei forces against their archnemesis, the Eastern Wei. Despite an early debacle, he captured the former Northern Wei capital Luoyang from Eastern Wei in 537. He rose to high ranks under Yuwen Tai, and his eldest daughter married Yuwen Tai's son Yuwen Yu. When the Northern Zhou dynasty replaced Western Wei, Dugu Xin was created Duke of Wei (衛國公), but was soon forced by the powerful regent Yuwen Hu to commit suicide for challenging him.

Empress Fu was an empress consort and empress dowager during the Later Zhou dynasty. She was a daughter of general Fu Yanqing and a younger sister of Empress Xuanyi, who was married to the Later Zhou emperor Guo Rong from 951 or so to 956. Guo Rong had been without a wife ever since Empress Xuanyi's death in 956, and he married the younger Fu in July 959 when he fell critically ill. The marriage was clearly political and most likely not consummated: Guo Rong died 10 days later and was succeeded by his 6-year-old son Guo Zongxun. Empress Dowager Fu as his guardian became the regent.