Zlatko Aleksovski (born 8 January 1960) is a former Bosnian Croat prison commander during the Bosnian War who was indicted by the International Criminal Tribunal for the former Yugoslavia and sentenced to seven years imprisonment for unlawful treatment of prisoners in Lašva Valley area in Bosnia and Herzegovina.

Zlatko Aleksovski was born in Pakrac, SR Croatia on 8 January 1960. [1] Aleksovski grew up and was educated in the town of Zenica in SR Bosnia and Herzegovina of the SFR Yugoslavia. [2] He later attained a degree from the University of Sarajevo in Sociology. After graduating from University, Aleksovski worked in the prison at Zenica as a prison officer from 1987–92, in charge of rehabilitating and overseeing for the welfare of approximately fifty prisoners. [2]

Role in the Bosnian War

During the Croat–Bosniak War (part of the 1992–95 Bosnian War) Aleksovski was the prison commander of Kaonik prison in Busovača municipality [3] from January to May 1993. [1]

During this period he received several hundred Bosniak civilians from the Croatian Defence Council (HVO) at the detention centre in Kaonik. [4]

During his command at Kaonik prison, the ICTY found that "Many detainees under his control were subjected to inhumane treatment, including excessive and cruel interrogation, physical and psychological harm, and forced labour, the detainees were also used as human shields and murdered or otherwise killed." [3] After serving as prison commander at Kaonik, Aleksovski later served as HVO 'Head of District' at Mostar Prison in Bosnia and Herzegovina. [5]

On 8 June 1996 shortly after the end of the Bosnian War, Aleksovski was arrested by Croatian authorities in Split, before being transferred to the ICTY in The Hague, Netherlands on 28 April 1997. [1] The Supreme Court of Croatia had authorised Aleksovski's extradition to The Hague, however he wasn't actually extradited until the United States had pressured Croatia to do so. [6] On 2 November 1995 the ICTY charged Aleksovski of violating two articles of the ICTY Statute "on the basis of both individual criminal responsibility and superior criminal responsibility" per Article 7 of the ICTY Statute. [4] [7] Aleksovski was charged violating the following Articles of the ICTY Statute:

On 7 May 1999 Aleksovski was initially sentenced to imprisonment for two and a half years. [9]

Aleksovski's defence filed an appeal (regarding the guilty verdict to Article 3) on 17 May 1999 and the prosecution countered with another appeal (regarding the not guilty verdict to Article 2 and the length of the sentence) on 19 May 1999. Due to the ongoing appeals Aleksovski was released from 7 May 1999 until 9 February 2000 [4] when the ICTY ordered his re-arrest. [6] The ICTY's Appeals Chamber came to a conclusion on 24 March 2000. [4] The defence's appeal regarding the conviction was eventually denied, while the prosecution's appeal regarding the judgement and the sentence was allowed. [4] The Appeals Chamber stated that Aleksovski was "the commander of the prison and as such the authority who could have prevented crimes in the prison and certainly should not have involved himself in them. An appropriate sentence should reflect these factors". [6] Aleksovski's sentence was consequently increased to seven years imprisonment. [4]

On 22 September 2000, Aleksovski was transferred to Finland to serve the remainder of his seven-year prison sentence. [6] Finland was one of the countries in agreement with the ICTY to enforce sentences. [4] Aleksovski was released from prison a year later, on 14 November 2001.[ why? ] [6]

Aleksovski describes himself as being an ethnic Croat. [2] He is married with two children. [2]

Tihomir Blaškić is a retired general of the Croatian Defence Council (HVO) who served during the Bosnian War and the Croat–Bosniak War. The International Criminal Tribunal for the Former Yugoslavia (ICTY) indicted him on war crimes charges and in 2000 he was sentenced to 45 years of prison. In July 2004, the ICTY, on appeal, determined that his command responsibility for most of the charges was non-existent and his sentence was lessened to nine years imprisonment. He was released the following month. 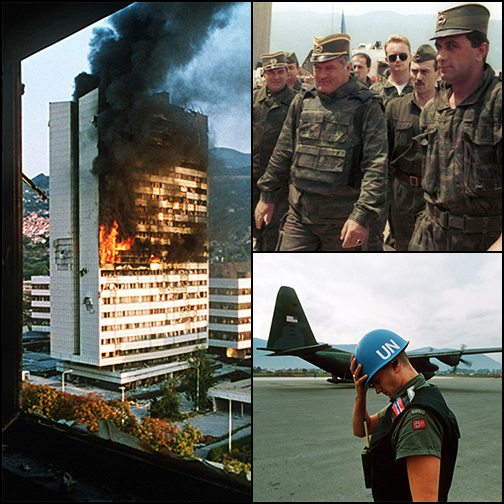 The Bosnian War was an international armed conflict that took place in Bosnia and Herzegovina between 1992 and 1995. The war is commonly seen as having started on 6 April 1992, following a number of violent incidents earlier in the year, but also in 1991. The war ended on 14 December 1995. The main belligerents were the forces of the Republic of Bosnia and Herzegovina and those of Herzeg-Bosnia and Republika Srpska, proto-states led and supplied by Croatia and Serbia, respectively.

Vojislav Šešelj is a Serbian politician, founder and president of the far-right Serbian Radical Party (SRS); he was convicted of war crimes by the International Criminal Tribunal for the former Yugoslavia (ICTY). Between 1998 and 2000, he served as the deputy prime minister of Serbia.

Jadranko Prlić is a Bosnian Croat politician who held the position of Prime Minister of the Croatian Republic of Herzeg-Bosnia, an unrecognized entity within Bosnia and Herzegovina, from 1993 to 1996. From 1994 to 1996, he was the Federal Minister of Defence and from 1997 to 2001, the Minister of Foreign Affairs after the Dayton Peace Accords.

Bruno Stojić is a Bosnian Croat politician convicted by the International Criminal Tribunal for the former Yugoslavia (ICTY). His trial, joined with five co-accused Bosnian-Croat politicians active in the Croatian Republic of Herzeg-Bosnia wartime entity, ended with him being found guilty and sentenced to 20 years in prison.

The Čelebići camp was a prison camp run by joint Bosniak and Bosnian Croat forces during the Bosnian War where Serb prisoners were detained and subjected to murder, beatings, torture, sexual assaults and otherwise cruel and inhumane treatment. The facility was used by several units of the Bosnian Ministry of the Interior (MUP), Croatian Defence Council (HVO) and later the Bosnian Territorial Defence Forces (TO). It was located in Čelebići, a village in the central Bosnian municipality of Konjic.

Dario Kordić is a Bosnian Croat former politician from the Croatian Democratic Union of Bosnia and Herzegovina, military commander of the Croatian Defence Council (HVO) between 1992 and 1994, vice president of the Croatian Republic of Herzeg-Bosnia, a self-proclaimed Croat territory in Bosnia and Herzegovina and convicted war criminal. He was sentenced to 25 years in prison in February 2001 for war crimes committed against the Bosniak population during the 1992–94 Bosniak-Croat war, and was released in June 2014 after having served two thirds of his sentence.

Hazim Delić is a Bosnian former prison camp commander who served as the deputy commander of the Čelebići camp, a joint Bosniak and Bosnian Croat forces run prison camp, during the Bosnian War. The majority of the prisoners who were detained in the camp were men, captured during and after the military operations at Bradina and Donje Selo and their surrounding areas.

The Ahmići massacre was the culmination of the Lašva Valley ethnic cleansing committed by the Croatian Community of Herzeg-Bosnia's political and military leadership on Bosniak civilians during the Croat-Bosniak War in April 1993. It was the largest massacre committed during the conflict between Bosnian Croats and the Bosniak-dominated Bosnian government.

Operation Neretva '93 was an Army of the Republic of Bosnia and Herzegovina (ARBiH) operation against the Croatian Defence Council (HVO) in September 1993 on a 200 km long front from Gornji Vakuf to south of Mostar, one of its largest of the year, during the Croat–Bosniak War. The ARBiH made limited gains in the area of northern Herzegovina and around Mostar, but did not achieve a breakthrough to the southern Neretva, where the HVO retained control. The operation was halted in October. During the operation, dozens of Croat civilians were killed in the Grabovica and Uzdol massacres.

The Lašva Valley ethnic cleansing, also known as the Lašva Valley case, refers to numerous war crimes committed during the Bosnian war by the Croatian Community of Herzeg-Bosnia's political and military leadership on Bosnian Muslim (Bosniak) civilians in the Lašva Valley region of Bosnia-Herzegovina. The campaign, planned from May 1992 to March 1993 and erupting the following April, was meant to implement objectives set forth by Croat nationalists in November 1991. The Lašva Valley's Bosniaks were subjected to persecution on political, and religious grounds, deliberately discriminated against in the context of a widespread attack on the region's civilian population and suffered mass murder, rape, imprisonment in camps, as well as the destruction of cultural sites and private property. This was often followed by anti-Bosniak propaganda, particularly in the municipalities of Vitez, Busovača, Novi Travnik and Kiseljak. 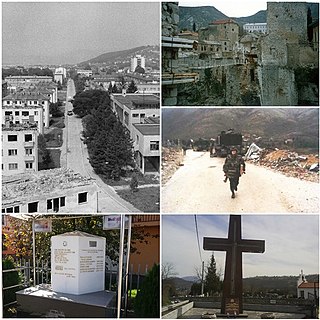 The Croat–Bosniak War was a conflict between the Republic of Bosnia and Herzegovina and the self-proclaimed Croatian Republic of Herzeg-Bosnia, supported by Croatia, that lasted from 18 October 1992 to 23 February 1994. It is often referred to as a "war within a war" because it was part of the larger Bosnian War. In the beginning, Bosniaks and Croats fought in an alliance against the Yugoslav People's Army (JNA) and the Army of Republika Srpska (VRS). By the end of 1992, however, tensions between Bosniaks and Croats increased. The first armed incidents between them occurred in October 1992 in central Bosnia. Their military alliance held out until early 1993 when their cooperation fell apart and the two former allies engaged in open conflict.

Bosnian mujahideen, also called El Mudžahid, were foreign Muslim volunteers who fought on the Bosniak side during the 1992–95 Bosnian War. They first arrived in central Bosnia in the second half of 1992 with the aim of helping their Bosnian Muslim co-religionists in fights against Serb and Croat forces. Mostly they came from North Africa, the Near East and the Middle East. Estimates of their numbers vary from 500 to 6,000.

Radoslav Brđanin is a Bosnian Serb convicted war criminal. In 2004 he was sentenced to 32 years imprisonment by the International Criminal Tribunal for the Former Yugoslavia for crimes committed during the Bosnian War. The sentence, which he is serving in Denmark, was reduced by two years on appeal in 2008.

The Croat–Bosniak War was a conflict between the Republic of Bosnia and Herzegovina and the Croatian Community of Herzeg-Bosnia, supported by Croatia, that lasted from 19 June 1992 – 23 February 1994. The Croat-Bosniak War is often referred to as a "war within a war" because it was part of the larger Bosnian War. 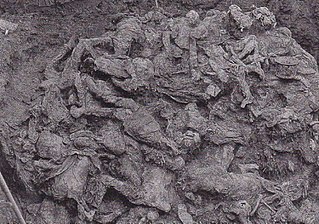 Ethnic cleansing occurred during the Bosnian War (1992–95) as large numbers of Bosnian Muslims (Bosniaks) and Bosnian Croats were forced to flee their homes or were expelled by the Army of Republika Srpska and Serb paramilitaries. Bosniaks and Bosnian Serbs had also been forced to flee or were expelled by Bosnian Croat forces, though on a restricted scale and in lesser numbers. The UN Security Council Final Report (1994) states while Bosniaks also engaged in "grave breaches of the Geneva Conventions and other violations of international humanitarian law", they did not engage in "systematic ethnic cleansing" to the same degree as Bosnian Serb forces. According to the report, "there is no factual basis for arguing that there is a 'moral equivalence' between the warring factions".

Amir Kubura is a former Bosnian commander of the Army of the Republic of Bosnia and Herzegovina and officer of the Yugoslav People's Army who was indicted by the International Criminal Tribunal for the former Yugoslavia and sentenced to two years imprisonment for 'plunder of public or private property'.

The Battle of Bugojno was fought between forces of the Army of the Republic of Bosnia and Herzegovina (ARBiH) and the Croatian Defence Council (HVO) for control of the town and municipality of Bugojno in central Bosnia, from 18–28 July 1993. The area of Bugojno was under joint control of the ARBiH 307th Brigade and the HVO Eugen Kvaternik Brigade since the start of the Bosnian War. Violent incidents in Bugojno followed the escalation of the Croat-Bosniak War in adjacent municipalities throughout the 1st half of 1993. Bugojno was spared from fighting and the two local brigades were still formally allied by June 1993, at the time of an ARBiH offensive in central Bosnia.