Zoran Janjetov (Serbian Cyrillic : Зоран Јањетов; born 23 June 1961) is a Serbian comics artist. Janjetov is among most prominent comics creators of former Yugoslavia, published worldwide. [1] [2] He is best known as the illustrator of Avant l'Incal and The Technopriests , written by Alejandro Jodorowsky. [3]

During the mid-1980s, Janjetov was a vocalist for the Yugoslav art rock band Heroina, with which he recorded one album.

Janjetov started to draw at very early age with strong support from his parents. His father, an architect by profession, gave him the knowledge needed to start his career. Young Janjetov was influenced by the works of Walt Disney, and had already made his first short comic at age seven.

After finishing high school, he continued his education at the Academy of Arts in Novi Sad, where he graduated.

From 1981 to 1995, Janjetov worked on the Bernard Panasonik, published in magazines Yu strip magazin and Vreme zabave .

In 1986, Janjetov was chosen by Alejandro Jodorowski to finish the colour art in The Incal . [4]

In 1983, Janjetov became a vocalist for the art rock band Heroina. [5] With the band he recorded one self-titled album, produced by Mitar Subotić and released in 1985. [5]

The Prize for a Series is one of the prizes awarded by the Angoulême International Comics Festival. This prize was first awarded in 2004, then after two more years was cancelled. It was reinstated in 2010 and has been awarded ever since.

The Incal is a French graphic novel series written by Alejandro Jodorowsky and originally illustrated by Jean Giraud. The Incal, with first pages originally released as Une aventure de John Difool in Métal hurlant and published by Les Humanoïdes Associés, introduced Jodorowsky's "Jodoverse", a fictional universe in which his science fiction comics take place. It is an epic space opera blending fantastical intergalactic voyage, science, technology, political intrigues, conspiracies, messianism, mysticism, poetry, debauchery, love stories, and satire. The Incal includes and expands the concepts and artwork from the abandoned film project Dune directed by Jodorowsky and designed by Giraud from the early 1970s.

Les Humanoïdes Associés ("Humanoïdes") is a Franco-American publishing house specializing in comics and graphic novels. Founded in December 1974 by comic artists Mœbius, Jean-Pierre Dionnet, Philippe Druillet, and financial director Bernard Farkas in order to publish Métal Hurlant, it quickly expanded to include a variety of science fiction works, featuring mature themes that were not commonplace in the Franco-Belgian comic world. Considered revolutionary in the comic book form at the time, chiefly due to its focus on the science fiction genre, the work found in Humanoïdes inspired many generations of authors and filmmakers.

Travis Charest is a Canadian comic book penciller, inker and painter, known for his work on such books as Darkstars, WildC.A.T.s, Grifter/Shi, WildC.A.T.s/X-Men: The Golden Age and The Metabarons. He is known for his detailed line work and muted color palette, and is a much sought-after cover artist, having done extensive cover work for many other books, such as various Star Wars series from Dark Horse Comics.

Mitar Subotić "Suba", also known as Rex Ilusivii, was a Serbian-born musician and composer who was set to become one of Brazil's most prominent producers when he died in November 1999. 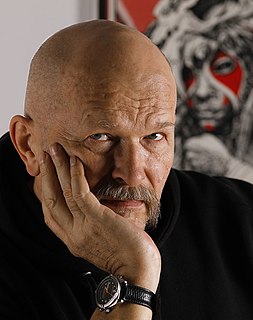 Georges Bess is a comics artist and comic book creator, best known for his collaborations with Alejandro Jodorowsky.

Bjesovi is the self-titled and second album of the Serbian rock band Bjesovi released in 1994.

Godina sirotinjske zabave is the second album by the Serbian alternative rock band Block Out, released by Metropolis Records in 1996. The album was rereleased by Multimedia records in 2004.

Pop Mašina was a Yugoslav progressive rock band from Belgrade. Pop Mašina was formed in 1972, and released two studio albums and one live album before disbanding in 1978. After Pop Mašina disbanded, the band's former members formed a short-lasting hard rock band Rok Mašina.

Angel's Breath was a project by Serbian and Yugoslav musicians Milan Mladenović and Mitar Subotić "Suba". Initially named Dah Anđela and founded in 1985 by the two musicians with the guitarist Goran Vejvoda, the project was reactivated in São Paulo, Brazil, where Subotić had moved to live in the early 1990s, with a lineup of Brazilian musicians.

Zdravko Zupan was a Yugoslav comic book creator and historian.

Momčilo "Moma" Rajin is a Serbian art and music critic, theorist and historian, artist, publisher and cultural facilitator, living and working in Belgrade.

Heroina was a Yugoslav art rock band from Novi Sad.

Ex YU rock enciklopedija 1960 - 2006 is a book by Serbian author, journalist and music critic Petar Janjatović. Published in 2007, the book represents the third, expanded edition of Janjatović's 1998 book Ilustrovana YU rock enciklopedija 1960 - 1997. The book features information about most important acts of the rock scene of Socialist Federal Republic of Yugoslavia, as well as of scenes of the successor states.