Zubkov (Russian : Зубков, from зуб meaning tooth) is a Russian masculine surname, its feminine counterpart is Zubkova. It may refer to

Kuznetsov, Kuznyetsov, Kuznetsoff, or Kouznetsov or Kuznetsova is the third most common Russian surname, an equivalent of the English "Smith".

Yakovlev (Яковлев) is an East Slavic surname derived from the masculine given name Yakov. Yakovleva is the feminine form.

Kozlov or Kozlova is a Russian surname. It derives from the sobriquet "козёл". Notable people with the surname include:

Alexeyev, Alekseyev, Alexeiev, Alexeev or Alekseev is a common Russian surname that is derived from the male given name Alexey (Алексей) and literally means Alexey's. Often the same name appears in English in several different transliterations. Similarly, Alexeyeva, Alekseyeva, Alexeeva and Alekseeva are female versions of the same last name.

Bykov, or Bykova, is a common Russian last name, derived from the word "бык" (bull), and may refer to:

Petrenko is a surname of Ukrainian origin derived from the first name Petro and effectively renders into English as of Peter/Peter's. It may refer to:

Polyakov or Poliakov,, or Polyakova, Polyakova is a Russian language surname. It may be transliterated as Poliakoff. 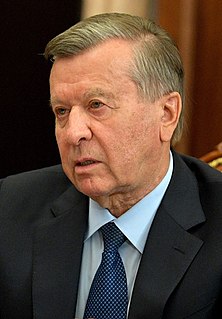 Viktor Alekseyevich Zubkov is a Russian politician and businessman who served as the 36th Prime Minister of Russia from September 2007 to May 2008. He was Vladimir Putin's First Deputy Prime Minister during the presidency of Dmitry Medvedev.

Viktor Alekseyevich Zubkov was a Soviet professional basketball player and coach. At a height of 2.04 m, he played at the center position. He is considered to be one of the most distinguished players of Soviet and European basketball in the 1950s and 1960s.

Viktor Kuznetsov may refer to:

Events from the year 2012 in the Russia

Kramarenko Ukrainian and Russian surname. It does not change according to the gender of the bearer.