Zucca may refer to:

André Zucca (1897-1973) was a French photographer and Nazi collaborator, most well known for his work with the German propaganda magazine Signal.

Mana-Zucca was an American actress, singer, pianist and composer.

Momordica is a genus of about 60 species of annual or perennial climbers herbaceous or rarely small shrubs belonging to the family Cucurbitaceae, natives of tropical and subtropical Africa and Asia and Australia. Most species produce floral oils and are visited by specialist pollinators in the apid tribe Ctenoplectrini. A molecular phylogeny that includes all species is available. 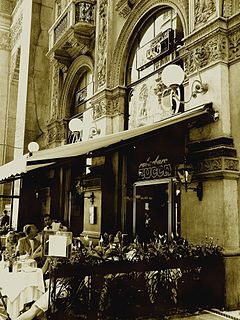 Zucca is a commercial Italian aperitif. Although zucca is the Italian word for "squash" or "pumpkin", it actually takes its name after Zucca's bar, located in the Galleria Vittorio Emanuele II in Milan. Its base ingredient is in fact rhubarb, also combined with zest, cardamom seeds and other curative herbs. The liqueur has a delicate and pleasant bittersweet taste and is often mixed with soda water and ice. 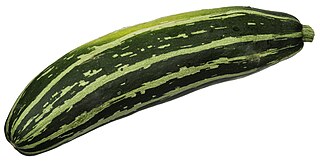 The zucchini or courgette is a summer squash which can reach nearly 1 metre in length, but is usually harvested when still immature at about 15 to 25 cm. A zucchini is a thin-skinned cultivar of what in Britain and Ireland is referred to as a marrow. In South Africa, a zucchini is known as a baby marrow. 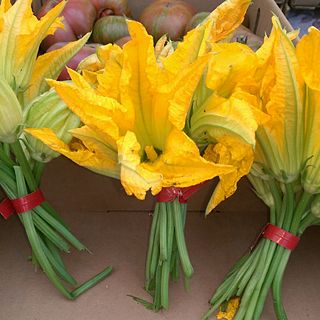 Squash blossoms are the edible flowers of Cucurbita species, particularly Cucurbita pepo, the species that produces zucchini (courgette), marrow, spaghetti squash, and many other types of squash.

Sofia Milos is a Swiss-born Italian/Greek actress. She is best known for her role as Yelina Salas on CSI: Miami. She has also had a role on The Sopranos as Camorra Boss Annalisa Zucca, as well as roles in TV series such as Curb your Enthusiasm, Friends and ER.

"Commendatori" is the seventeenth episode of the HBO original series The Sopranos and the fourth of the show's second season. It was written by David Chase and directed by Tim Van Patten, and originally aired on February 6, 2000.

One by One is an album by American soul music group the Impressions, released in 1965. It consists mostly of cover songs with only a few originals. 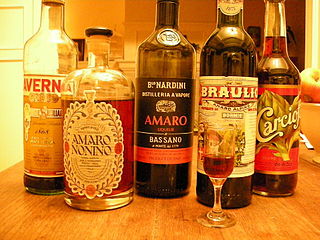 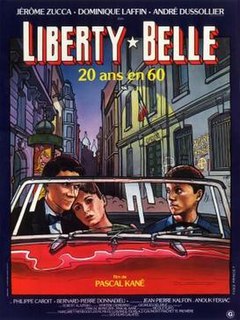 Liberty Belle is a 1983 French drama film and is also Juliette Binoche's film debut. The film premiered at the 1983 Cannes Film Festival.

The Corsi were an ancient people of Sardinia and Corsica, to which they gave the name, as well as one of the three major groups among which the ancient Sardinians considered themselves divided. Noted by Ptolemy, they dwelt at the extreme north-east of Sardinia, in the region today known as Gallura, near the Tibulati and immediately north of the Coracenses.

Nodal marginal zone B cell lymphoma (NMZL) is an uncommon form of marginal-zone lymphoma that can produce colonization of the follicles in the lymph node. It is a form of low grade lymphoma with similar incidence in men and women and a mean age of 61 years. It is often associated with Sjogren syndrome. It shows interfollicular infiltrate of monocytoid, centrocyte-like B cells that are 2–3× larger than small lymphocytes with partial/total effacement of lymph node architecture.

Percocettes are a female-fronted American punk rock band formed in 2006 in Philadelphia, Pennsylvania. The brainchild of veteran musician Toothless George and Cole Della-Zucca, a 20-year-old woman without formal music training.

Rita Luisa Zucca was an Italian-American radio announcer who broadcast Axis propaganda to Allied troops in Italy and North Africa. She became known as one of the "Axis Sallys", along with Mildred Gillars, who broadcast out of Berlin, Germany.

Frontiers in Psychology is a peer-reviewed open-access academic journal covering all aspects of psychology in 27 sections. It was established in 2010 and is published by Frontiers Media, who were included in Jeffrey Beall's now-defunct list of "potential, possible, or probable predatory publishers". The editor-in-chief is Axel Cleeremans.

Everyday Gourmet with Justine Schofield is an Australian television cooking show, that is hosted by former MasterChef contestant Justine Schofield. It first broadcast on Network Ten in 2011. The show is directed towards the home cook and features recipes ranging from simple to the more complex. It regularly features guests, including chefs, food specialists and other former Masterchef contestants. The series also screens on Lifestyle Food.

Vittorio Zucca was an Italian sprinter.

Giuseppe Zucca (1887–1959) was an Italian screenwriter. He wrote twenty six screenplays during his career, including the 1949 adventure film William Tell.

The Paleo-Corsican language is an extinct language spoken in Corsica and presumably in the northeastern part of Sardinia by the ancient Corsican populations during the Bronze and Iron Ages. The scanty evidence of the language, which comes mainly from toponymy, would indicate a type of Pre-Indo-European language or, according to others, Indo-European, with Ligurian and Iberian affinity.