He made three trips to Central Asia between 1902 and 1910, all financed by Count Otani. Although he travelled as a priest of the Jōdo Shinshū sect, he was suspected by British and Russian Intelligence of being an officer of the Imperial Japanese Navy.

Tachibana was instrumental in delivery of the part of Dunhuang manuscripts to Japan in 1912. [1]

The Dunhuang manuscripts are a cache of important religious and secular documents discovered in the Mogao Caves of Dunhuang, China, in the early 20th century. Dating from late 4th to early 11th centuries, the manuscripts include works ranging from history and mathematics to folk songs and dance. There are also a large number of religious documents, most of which are Buddhist, but other religions including Daoism, Nestorian Christianity and Manichaeism are also represented. The majority of the manuscripts are in Chinese. Other languages represented are Khotanese, Sanskrit, Sogdian, Tangut, Tibetan, Old Uyghur language, Hebrew and Old Turkic. The manuscripts are a major resource for academic studies in a wide variety of fields including history, religious studies, linguistics, and manuscript studies. 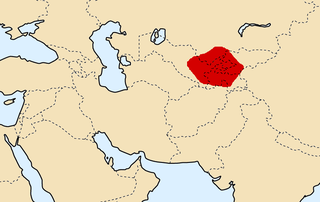 Sogdia or Sogdiana was an ancient Iranian civilization that at different times included territory located in present-day Kazakhstan, Tajikistan, and Uzbekistan such as: Samarkand, Bukhara, Khujand, Panjikent, and Shahrisabz. Sogdiana was also a province of the Achaemenid Empire, eighteenth in the list on the Behistun Inscription of Darius the Great. In the Avesta, Sogdiana is listed as the second best land that the supreme deity Ahura Mazda had created. It comes second, after Airyanem Vaejah, "homeland of the Aryans", in the Zoroastrian book of Vendidad, indicating the importance of this region from ancient times. Sogdiana was first conquered by Cyrus the Great, the founder of the Achaemenid Empire. The region would then be annexed by the Macedonian ruler Alexander the Great in 328 BC. The region would continue to change hands under the Seleucid Empire, Greco-Bactrian Kingdom, Kushan Empire, Hephthalite Empire, and Sasanian Empire.

Count Ōtani Kōzui was the 22nd Abbot of the Nishi Honganji sub-sect of Jōdo Shinshū Buddhism in Kyoto, Japan. He is known for expeditions to Buddhist sites in Central Asia, such as Subashi.

Eizaburo Nomura was a Japanese explorer of Central Asia. He made two trips to Central Asia between 1902 and 1910, all financed by Count Ōtani. Although he travelled as a secretary of Otani's Buddhist temple in Kyoto, he was suspected, correctly, by British and Russian Intelligence of being in the Imperial Japanese Army.

Brigadier Allen Robert Betham Shuttleworth was an officer in the British Indian Army and player of The Great Game.

The Subashi Temple is a ruined Buddhist temple near Kucha in the Taklamakan Desert, on the ancient Silk Road, in Xinjiang, China. The city was partly excavated by the Japanese archaeologist Count Otani.

Sir Gerard Leslie Makins Clauson was an English civil servant, businessman, and Orientalist best known for his studies of the Turkic languages.

The Niya ruins, is an archaeological site located about 115 km (71 mi) north of modern Niya Town on the southern edge of the Tarim Basin in modern-day Xinjiang, China. The ancient site was known in its native language as Caḍ́ota, and in Chinese during the Han Dynasty as Jingjue. Numerous ancient archaeological artifacts have been uncovered at the site.

The Astana Cemetery is an ancient cemetery 37 kilometers (23 mi) southeast of Turpan, in Xinjiang, China, 6 kilometres (3.7 mi) from the ancient city of Gaochang. It served mainly as the cemetery for the descendants of Chinese settlers in Gaochang from the 4th century to the first half of the 8th century. The complex covers 10 square kilometres (3.9 sq mi) and contains over 1,000 tombs. Due to the arid environment many important artifacts have been well preserved at the tombs, including natural mummies. 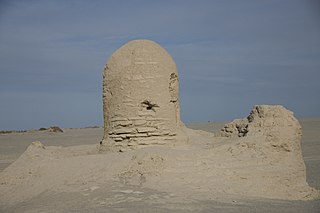 Miran is an ancient oasis town located on the southern rim of the Taklamakan Desert in Xinjiang, Northwest China. It lies on the famous trade route known as the Silk Road where the Lop Nur desert meets the Altun Shan mountains. Two thousand years ago a river flowed down from the mountain and Miran had a sophisticated irrigation system. Now the area is a sparsely inhabited, dusty region with poor roads and minimal transportation. Archaeological excavations since the early 20th century have uncovered an extensive Buddhist monastic site that existed between the 2nd to 5th centuries AD, as well as the Miran fort, a Tibetan settlement during the 8th and 9th centuries AD.

The International Dunhuang Project (IDP) is an international collaborative effort to conserve, catalogue and digitise manuscripts, printed texts, paintings, textiles and artefacts from Dunhuang and various other archaeological sites at the eastern end of the Silk Road. The project was established by the British Library in 1994, and now includes twenty-two institutions in twelve countries. As of 1 March 2016 the online IDP database comprised 137,812 catalogue entries and 483,721 images. Most of the manuscripts in the IDP database are texts written in Chinese, but more than fifteen different scripts and languages are represented, including Brahmi, Kharosthi, Khotanese, Sanskrit, Tangut, Tibetan, Tocharian and Old Uyghur.

The Kumtura Thousand Buddha Caves is a Buddhist cave temple site in the Autonomous Region of Xinjiang, China. The site is located some 25 km west of Kucha, Kuqa County, on the ancient Silk Road. 112 cave temples survive, dating from the fifth to the eleventh centuries. Damaged during the Islamic conquests and subsequently by occasional habitation after abandonment of the site, Kumtura was visited by a number of the early foreign expeditions to Chinese Central Asia, including the 1902 Ōtani expedition, Oldenburg, and Le Coq. The last detached several wall paintings and took them back to Berlin.

Farhad-beg-yailaki is an archaeological site on the Silk Road in what was the Kingdom of Khotan which is located 60 miles east of its affiliated city, Hotan, China.

The 1902 Ōtani expedition was a Japanese archaeological expedition to a series of Silk Road sites in the Taklamakan Desert, led by Count Ōtani Kōzui and lasting from 1902 until 1904. The expedition aimed to study the early transmission of Buddhism through Central Asia into China, and conducted major excavations in the Kucha area.

The Tangut translation of The General's Garden is a unique manuscript translation in the Tangut language and script of a Chinese military text, The General's Garden. The manuscript was collected from the abandoned fortress city of Khara-Khoto by Aurel Stein in 1914, and is held at the British Library in London, where it is catalogued as Or.12380/1840. The translation dates to the 12th or early 13th century, and predates any of the extant Chinese editions by some two hundred years. The Tangut text may therefore represent a version that is closer to the original Chinese text than the extant Ming Dynasty (1368–1644) Chinese editions.

Prof. Akio Katayama (片山章雄), a Japanese historian. He is a Professor of Oriental History and Inner Asian Studies at Tokai University.

Imre Galambos is a Hungarian Sinologist and Tangutologist who specialises in the study of medieval Chinese and Tangut manuscripts from Dunhuang. He is currently a Reader in Chinese Studies at the Faculty of Asian and Middle Eastern Studies at the University of Cambridge.