Zuihitsu (随筆) is a genre of Japanese literature consisting of loosely connected personal essays and fragmented ideas that typically respond to the author's surroundings. The name is derived from two Kanji meaning "at will" and "pen." The provenance of the term is ultimately Chinese, zuihitsu being the Sino-Japanese reading ( on'yomi ) of 随筆 (Mandarin: suíbǐ), the native reading ( kun'yomi ) of which is fude ni shitagau (“follow the brush”). [1] [ dubious – discuss ] Thus works of the genre should be considered not as traditionally planned literary pieces but rather as casual or randomly recorded thoughts by the authors.

Zuihitsu emerged in the Heian Period with Sei Shōnagon's The Pillow Book . Shōnagon, a member of the Heian Imperial Court, kept a private diary of her own observations and musings about courtly life. It is unclear whether or not she intended it to be released to the public (sections of the work suggest that she did not), but the work nevertheless survived and provides an alternate view into life of the era, making it an invaluable literary as well as historical resource.

The genre next gained momentum as a respectable form of writing several centuries later in the Kamakura Period. With the depotentiation of the Heian Court and the relocation of the capital to Kamakura, near modern-day Tokyo, many intellectuals, amidst social chaos, grew disillusioned and chose to live in asceticism – a trend that also reflected the growing importance of Pure Land Buddhism. Writing from isolation, these authors reflected on the degeneracy of their contemporaries, whom they considered philistines, in comparison to themselves, as well as general consideration of the impermanence of the material world. Major works from this period include Kamo no Chōmei's Hōjōki and Yoshida Kenkō’s Tsurezuregusa .

Zuihitsu rose to mainstream popularity in the Edo period, when it found a wide audience in the newly developed merchant classes. Furthermore, it gained a scholarly foothold, as Japanese classical scholars began customarily writing in the zuihitsu style. Reputable authors from this movement include Motoori Norinaga, Yokoi Yayu, and Matsudaira Sadanobu. [2]

As a genre largely focused on personal writing and contemplation, zuihitsu writings tend to explore issues reflective of attitudes pervasive at the time of their composition. Overarching themes, however, include the nature of aristocratic life and its faults as well as the unpleasantries of the world and its denizens. Many of the works feature instances of poetry, often reflecting on typically “Japanese” themes, such as appreciation for the changing of the seasons. Additionally, Kamakura Period zuihitsu, strongly rooted in Buddhist thought, typically contains the author’s musings on the impermanence of the material world. 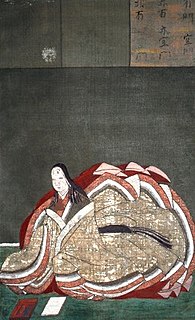 Murasaki Shikibu was a Japanese novelist, poet and lady-in-waiting at the Imperial court during the Heian period. She is best known as the author of The Tale of Genji, widely considered to be one of the world's first novels, written in Japanese between about 1000 and 1012. Murasaki Shikibu is a descriptive name; her personal name is unknown, but she may have been Fujiwara no Kaoriko, who was mentioned in a 1007 court diary as an imperial lady-in-waiting. 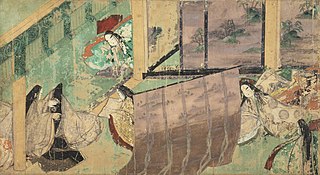 The Heian period is the last division of classical Japanese history, running from 794 to 1185. It followed the Nara period, beginning when the 50th emperor, Emperor Kanmu, moved the capital of Japan to Heian-kyō. It is a period in Japanese history when Chinese influences were in decline and the national culture matured. The Heian period is also considered the peak of the Japanese imperial court and noted for its art, especially poetry and literature. Two types of Japanese script emerged, including katakana, a phonetic script which was abbreviated into hiragana, a cursive alphabet with a unique writing method distinctive to Japan. This gave rise to Japan's famous vernacular literature, many of which were written by court women who were not as educated in Chinese compared to their male counterparts.

Early works of Japanese literature were heavily influenced by cultural contact with China and Chinese literature, and were often written in Classical Chinese. Indian literature also had an influence through the spread of Buddhism in Japan. In the Heian period, Japan's original kokufū culture developed and literature also established its own style. Following Japan's reopening of its ports to Western trading and diplomacy in the 19th century, Western literature has influenced the development of modern Japanese writers, while they have in turn been more recognized outside Japan, with two Nobel Prizes so far, as of 2020.

The Pillow Book is a book of observations and musings recorded by Sei Shōnagon during her time as court lady to Empress Consort Teishi during the 990s and early 1000s in Heian Japan. The book was completed in the year 1002. 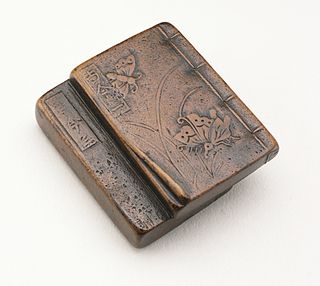 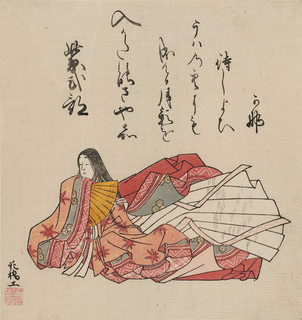 The Diary of Lady Murasaki is the title given to a collection of diary fragments written by the 11th-century Japanese Heian era lady-in-waiting and writer Murasaki Shikibu. It is written in kana, then a newly developed writing system for vernacular Japanese, more common among women, who were generally unschooled in Chinese. Unlike modern diaries or journals, 10th-century Heian diaries tend to emphasize important events more than ordinary day-to-day life and do not follow a strict chronological order. The work includes vignettes, waka poems, and an epistolary section written in the form of a long letter.

Kenkō was a Japanese author and Buddhist monk. His most famous work is Tsurezuregusa, one of the most studied works of medieval Japanese literature. Kenko wrote during the Muromachi and Kamakura periods.

Tsurezuregusa is a collection of essays written by the Japanese monk Yoshida Kenkō between 1330 and 1332. The work is widely considered a gem of medieval Japanese literature and one of the three representative works of the zuihitsu genre, along with Makura no Sōshi and the Hōjōki.

Hyakken Uchida was a Japanese author and academic.

Hōjōki, variously translated as An Account of My Hut or The Ten Foot Square Hut, is an important and popular short work of the early Kamakura period (1185–1333) in Japan by Kamo no Chōmei. Written in March 1212, the work depicts the Buddhist concept of impermanence (mujō) through the description of various disasters such as earthquake, famine, whirlwind and conflagration that befall the people of the capital city Kyōto. The author Chōmei, who in his early career worked as court poet and was also an accomplished player of the biwa and koto, became a Buddhist monk in his fifties and moved farther and farther into the mountains, eventually living in a 10-foot square hut located at Mt. Hino. The work has been classified both as belonging to the zuihitsu genre and as Buddhist literature. Now considered as a Japanese literary classic, the work remains part of the Japanese school curriculum.

Kiyohara no Motosuke was a Heian period waka poet and Japanese nobleman. His daughter was the Heian poet and author Sei Shōnagon, famous today for writing The Pillow Book. He is designated a member of the Thirty-six Poetry Immortals, and one of his poems is included in the famous Ogura Hyakunin Isshu. His court career included terms as governor of Kawachi Province and Higo Province. 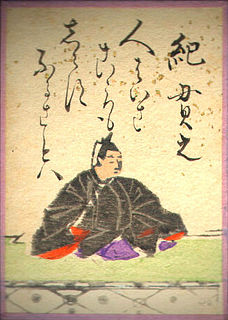 Poetic diary or Nikki bungaku (日記文学) is a Japanese literary genre, dating back to Ki no Tsurayuki's Tosa Nikki, compiled in roughly 935. Nikki bungaku is a genre including prominent works such as the Tosa Nikki, Kagerō Nikki, and Murasaki Shikibu Nikki. While diaries began as records imitating daily logs kept by Chinese government officials, private and literary diaries emerged and flourished during the Heian period.

Recluse Literature refers to a Japanese literary movement that rose to its peak in the late Heian Period.

Chiteiki (池亭記), also known as Chitei no Ki, is one of the representative kanbun texts of the mid Heian period. Belonging to the zuihitsu genre, it was written by Yoshishige no Yasutane (ja:慶滋保胤) in 982. The text is a valuable resource for understanding social issues within the capital at the time.

Inu makura or The Dog Pillow (犬枕) is an early-Edo period Japanese literary parody of The Pillow Book of Sei Shōnagon. The title has also been translated as The Mongrel Pillow.

Uma no Naishi was a Japanese Waka poet and noble from the middle Heian period. She is enumerated as one of the Thirty-Six Female Immortals of Poetry alongside famous authors, poets, and contemporaries Sei Shōnagon and Murasaki Shikibu.

Hateful Things is a section of The Pillow Book by Sei Shōnagon, a Japanese author and courtier of the Middle Heian period around 1000 AD.

Japan's medieval period was a transitional period for the nation's literature. Kyoto ceased being the sole literary centre as important writers and readerships appeared throughout the country, and a wider variety of genres and literary forms developed accordingly, such as the gunki monogatari and otogi-zōshi prose narratives, and renga linked verse, as well as various theatrical forms such as noh. Medieval Japanese literature can be broadly divided into two periods: the early and late middle ages, the former lasting roughly 150 years from the late 12th to the mid-14th century, and the latter until the end of the 16th century.